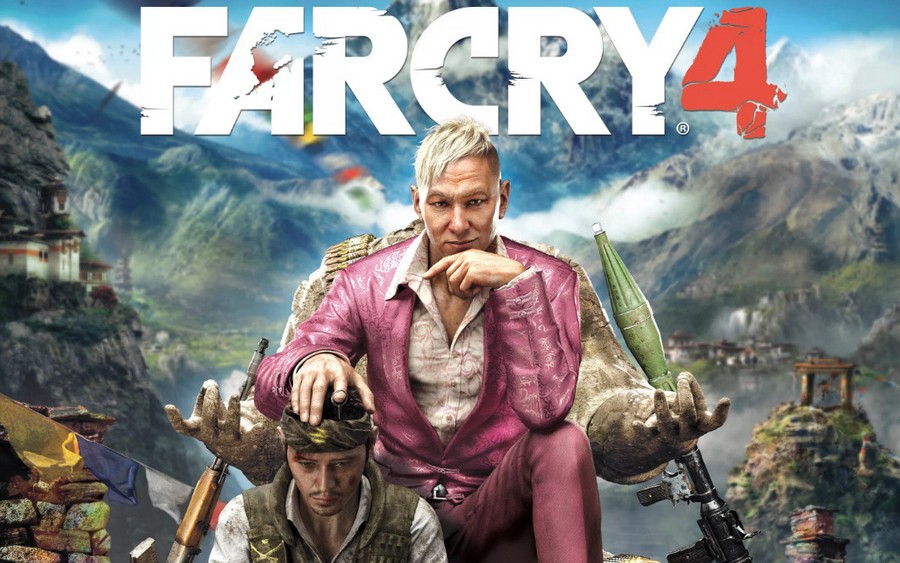 Approximate reading time: 24 min.
A link to the article will be sent to you on e-mail:

Far Cry 4 – is a popular computer game (2014 year) by Ubisoft Company. Now computer games have not surprisingly become one of the instruments of influence on the public opinion. All the technologies of mind control, used on TV and in cinematograph, had migrated in this sphere too.

That is waiting us in this game? Mainly propaganda of legal and illegal drugs, an abundance of things and dialogues, related to an intimate sphere, a little bit of homosexuality propaganda, some plot devices, which discredit religious people and the religion in general.

Propaganda in decorations and on the background

Propaganda through decoration looks in the following way – in many locations scattered bottles, boxes, ash trays, cigarette packs. Their task is to constantly remind the player of an opportunity to drink and to smoke. For example, in one of the first missions we reconquer the outpost, where there is a table with glasses of beer and a bar’s commercial “Last round: happy hour, best in town”, and nearby there is a table with cigarettes on it. 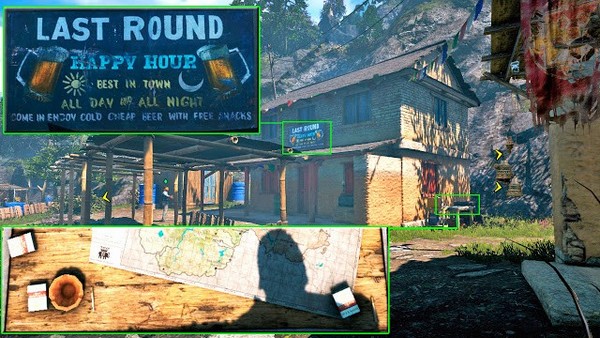 If one turns tail, he will see plenty of bottles and cigarettes. Whichever way one turns he sees drug poisons. 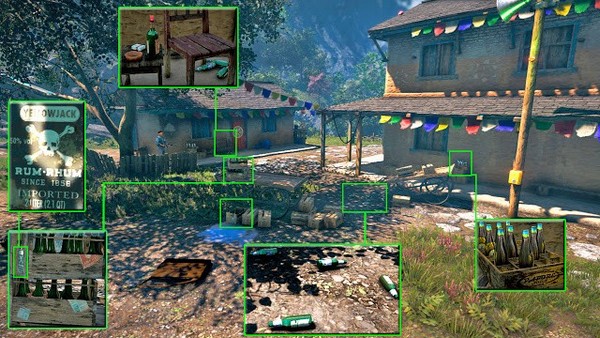 If one goes to one of the houses, he’s going to see bottles there too. At that all these is going to happen till the end of the game, one does not have to think, that we have just reconquered the outpost from the bad guys, and have not had a chance to take the garbage out. Such décor of living premises is common for positive characters as well. 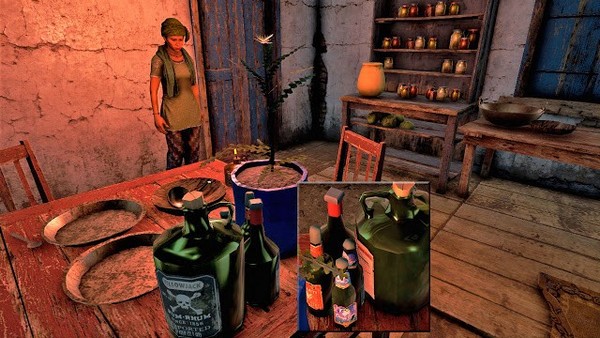 In the game positive and negative characters equally drink alcohol and smoke cigarettes. On the next picture is shown the camp, where soldiers of the Golden Way live – rum, beer, cigarettes. And also a heroin user set – syringes, a spoon, a lighter. 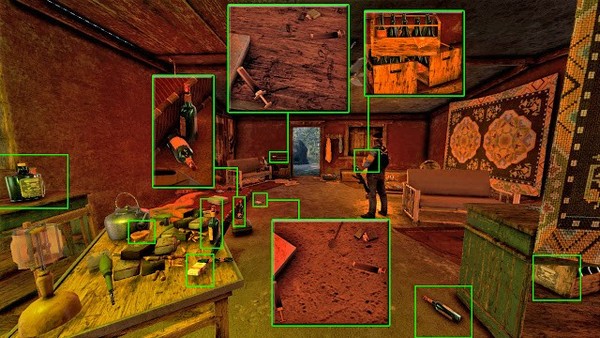 Here we see the camp of negative characters. Even at the altitude of 8 kilometers, where one can’t do without an oxygen mask, propagandists add alcohol and cigarettes. 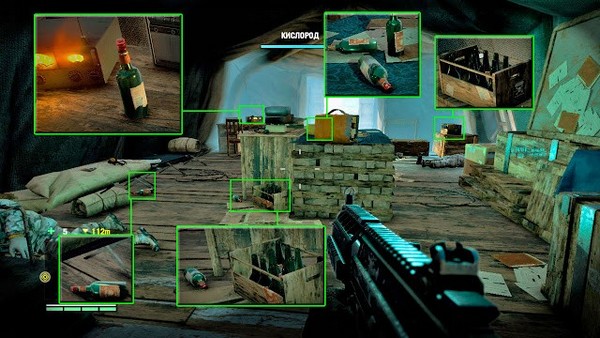 This is how the house of the main hero looks like, and these are only those, which hit in shot. 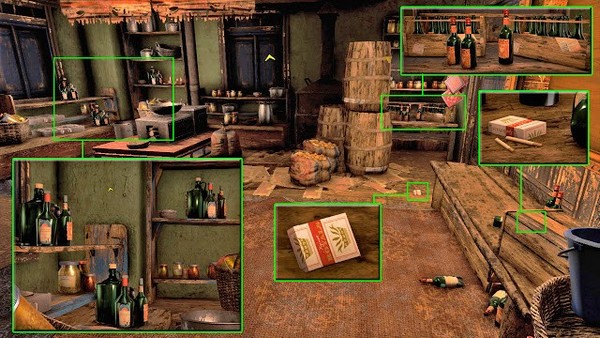 Just the house, which came across. Two ash trays, one of which is near the bed. What? A person living here is such addicted to cigarettes, that even smokes in bed? Or intoxication with nicotine poison is equated with rest? 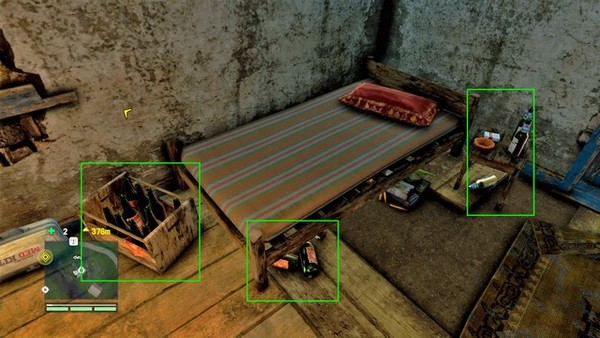 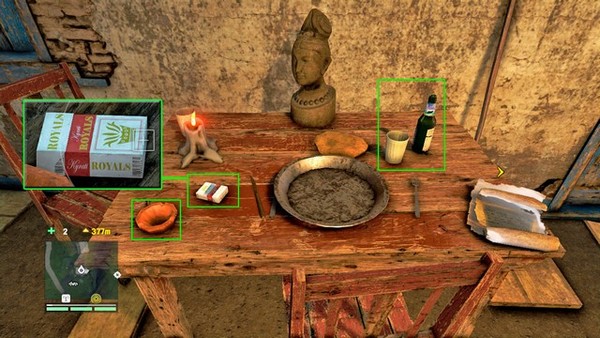 Here on each bed table one has thoughtfully laid out only alcohol and cigarettes. 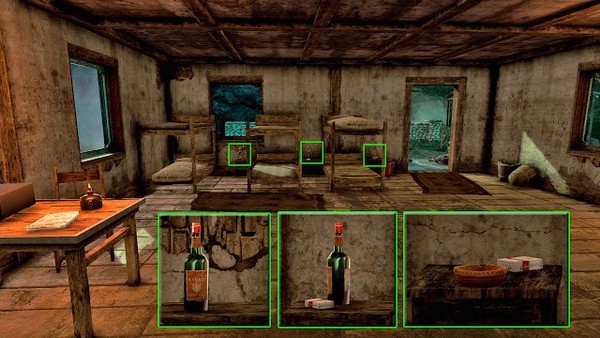 Near this house are located the main forces of our troop, else a box of beer and a smoking character. 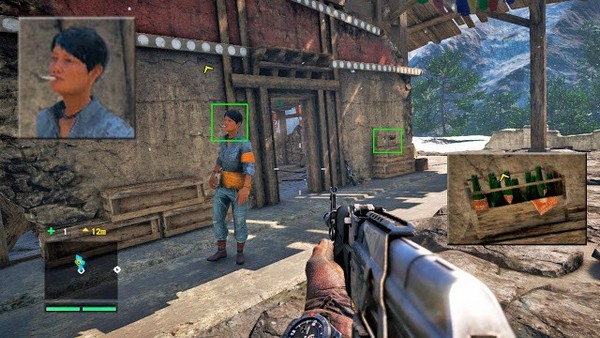 You have only seen a little part of propaganda technique though decorations. Using these and other mechanisms a player is being reminded of drugs up to 20-30 times per hour.

All the main characters drink alcohol

Two peas in a pod – a folk wisdom says. Propagandists understand this too, that’s why all the main characters of Far Cry 4 inform the player, that they sniff. It is nothing said about the harm of alcohol in the game. Not everybody is pictured with alcohol in hand, but one can easily guess, that characters constantly intoxicate themselves with alcohol poison, from things on their tables. 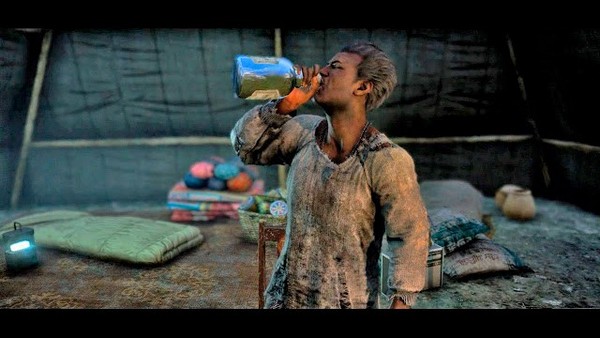 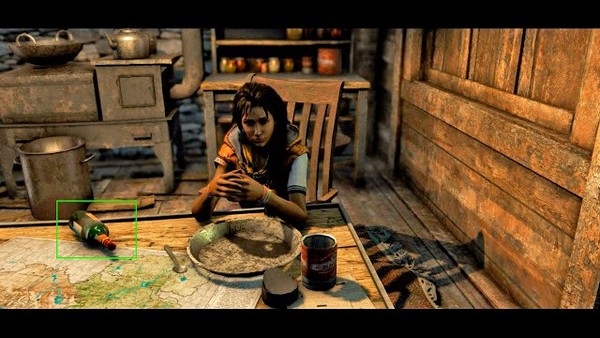 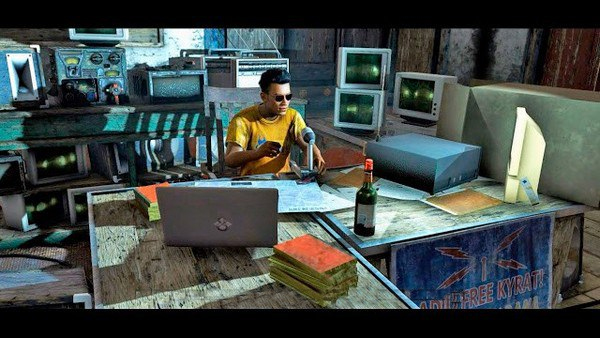 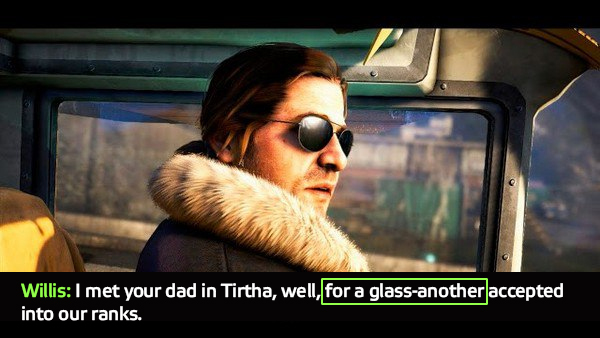 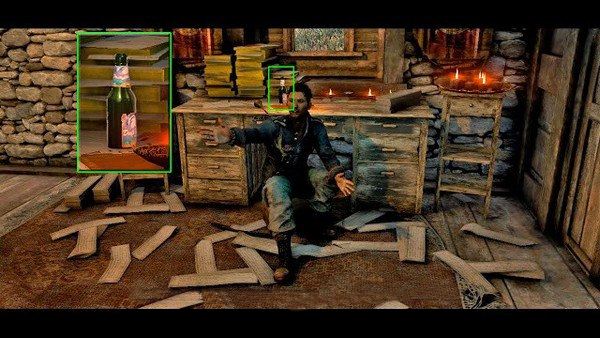 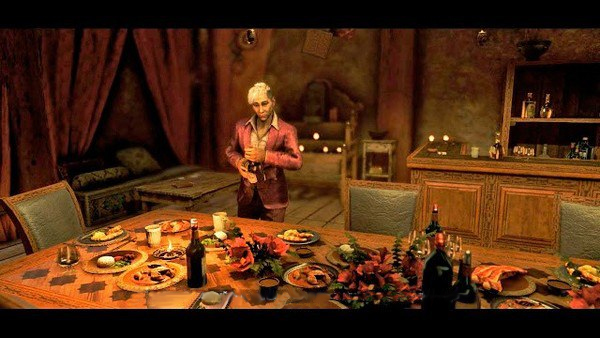 One can also go past the missions and their screen savers:

The list goes on and on, these have been only some screen savers to the missions.

In the game people drink on public events, on each table necessarily laid bottles and only bottles. In Fallout 4 in Diamond City also all tables necessarily contained alcohol. 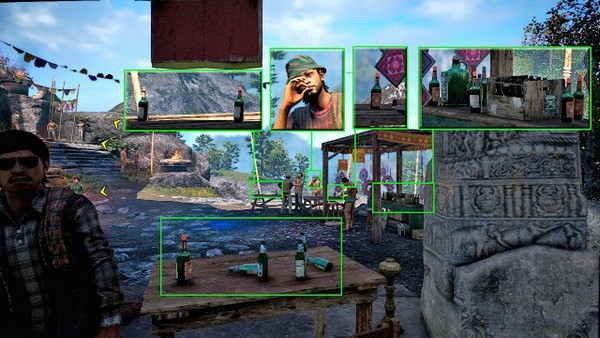 Sometimes non-player characters from the crowd also smoke or poison themselves with alcohol. 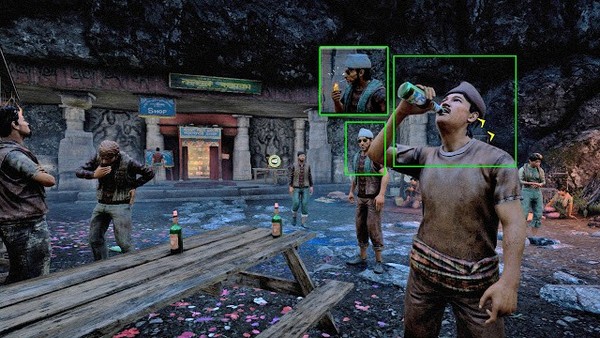 There are dozens of things in the game (loot, drop), which one can take from a murdered enemy or find in chests. The only point is in the cost, for which one can sell them in store. It’s unimportant, what a thing it is, all can be called simply as “stuff”, the difference is only in price.

Here is an example of the description of some things. 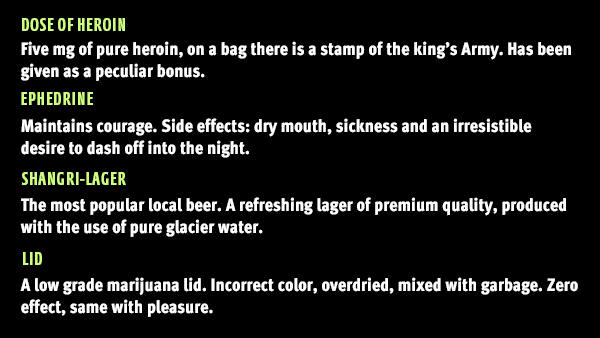 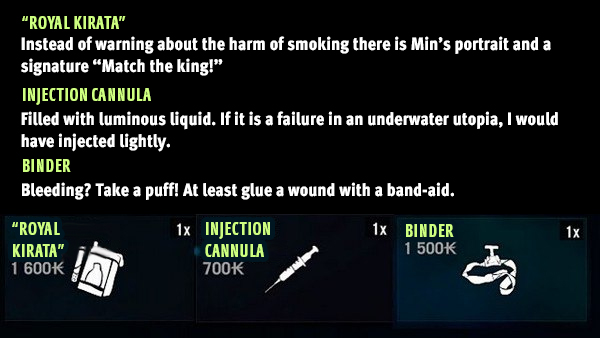 During the missions passing one can see names of the picked up things on a screen, therefore, even if in a mission’s screen saver or in the location itself the developers have not added bottles or cigarettes, you still have a chance to see on the screen something for the propaganda. 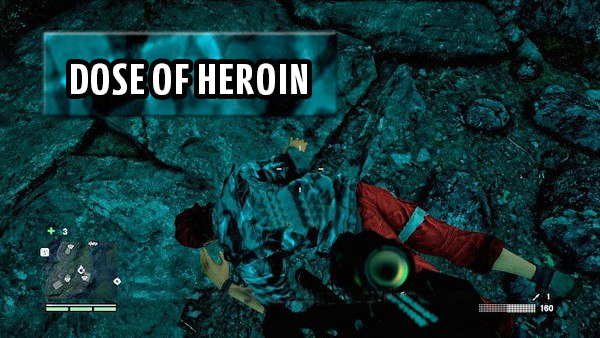 The most effective way to put a person on drugs is to jab him/her. Some drug dealers even practive the principle “the first time is free”. But games developers physically can’t make a person jab, that’s why they interest a player, showing “demo version” of drugs.

On the next video there is one of missions, where a character is after an injection. Watch to feel, what an impression about drugs game developers had wanted to create. Pleasant music and the world in juicy colors are used for a creation of an analogous of a “narcotic effect” (main plot happenings on the video are in the interval 04:40-05:50).

The made up positive effect – a character sees through walls. At that the game keeps quiet about the harm from drugs. I shall remind you the meaning of the word “propaganda”: propaganda – is a spread of information, when one facts are being hidden, and another are being hypertrophic, or made up. 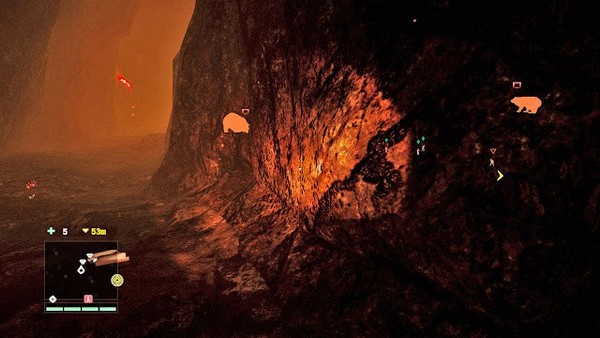 Screen savers in the game are no different from direct advertising: “a little bit – does not count”, “this is a superpower”, “you are like a superhero with it”. This is “good” and “kick in the butt”.

After this mission a player gets a skill of self-creation of a drug. Before the fight a player will often have to chop off to increase his combat characteristics. Side effects are not shown.

The picture confirming, that in the game universe this is namely a drug, not some other substance: 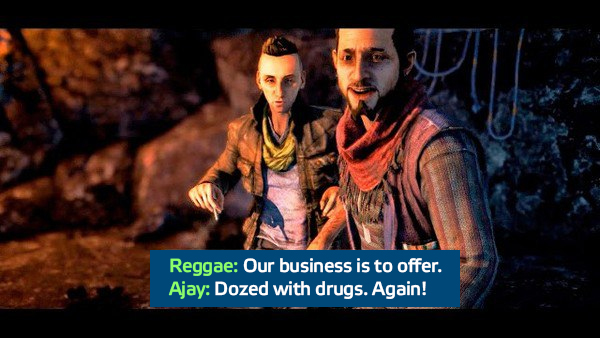 How has our character tried a drug for the first time?

He was forcefully injected. Despite, that he had already murdered dozens of enemies, two simple drug addicts cleverly pricked him so quickly that he did not have time to do anything. And so several times in a row – there was not a single scene where he resisted (the more successfully), all the time this happened suddenly. The character in the game had been under the influence of drugs 7 times, and always against his will, now forcibly pricked, then inadvertently inhaled.

Why in the script it is laid, that he is injected violently?

If one shows, that he takes off himself, this would be inherently perceived as if the main hero – is a drug addict. In this case, there is no opportunity to conduct a consistent argumentation, which goal is to change a player’s mind towards drugs poisoning. But in case in the beginning the character had been a common person, and then slowly came to the drugs himself, he continues to be perceived as normal, and by his example moves the player to the idea, that poisoning with drugs is normal behavior of an ordinary person.

From the state of “they pricked me, bastards” a player together with the main hero gradually move to “prick me, please”. At that thanks to numerous positive statements about drugs and concealment of negative sides, the transition is smooth and subtle.

Total during the course of the game there is going to be 4 missions from drug addicts, where each time they praise drugs in the screen saver. Ajai often smokes cannabis, initially he has been forcefully pricked, but in the last mission he himself asks “it is possible this time in an arm?” And before that there have been two more missions of other characters, where our hero once again not by his own will turned out to be under the influence of substances.

Before each encounter with enemies, the player can inject a few drugs:

The video shows how the process looks like, please, pay attention to the sounds that the character makes when injected – they are reminiscent of relief. To remind a player of drugs as often as possible, the restoration of health has been done through injections. If there is no injector, then a character can restore health not so efficiently, but without wasting resources, while showing the animation of getting a bullet or knife out of hand. If you pick up a first aid kit, then in the inventory appears only the injector, not bandages.

Sell drugs or not?

One of the methods of propaganda in games is make a player to decide – to support the bad or the good. The very formulation of the issue is already propagandizing.

Imagine that some person is approaching your child, and asks “Will I get you drugged or not?” Thus the person does not praise a drug, he only asks. But no parent will allow the child to be put in front of such a choice, because he knows, how it is eventually going end – if one constantly puts such a choice, sooner or later a child will agree.

In games, similarly, only here the problem is not that a player agrees to support the drug trade, but that he is “brainwashed” by the idea, that it is possible to deal with drug trafficking.

In the initial screen saver, the player listens to the following dialogue: 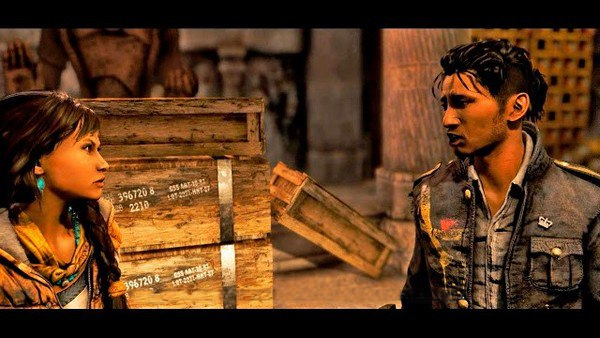 Sabal: The tea factory stores opium for shipment. It must be destroyed.

Amita: I’m sorry, what? Are you crazy? We must protect both the cargo and the fields.

Sabal: Amita, you’ve been up to your tricks again. Remember, Kirat will never become a drug empire!

Amita: Sabal, we do not have natural resources. What will become of us? The mines have become impoverished, and the fields of Kirat have been ruined for a long time. What will the people expect when we win?

Sabal: This is not our path. Understand you. Otherwise, we are no better than Pagan. The same evil.

Amita: At least we will not be poor.

After that we have a choice who to support. Sabal’s argumentation is always weak and abstract: “this is not our way,” “this is evil.” But Amita says that we will not be beggars, that is, lures money. It follows from the dialogue, that there are no options – either poverty or drug trafficking (the issue of exports). The option “not to trade, but to make a prosperous country” the game developers do not provide in principle.

In the game Fallout 4 has been used the same method. There was a choice to support a drug dealer or a mother with a son, who took drugs on credit. If we support the drug trafficker, then kill the mother and the son, or extort money; if we support the family, then kill the drug dealer. Argumentation sounded for both sides. Also in Fallout 4, there has been another choice – whether or not to bring drugs to an elderly woman. There, drugs also had a positive effect – with the help of them, she received visions. And also the health there was restored through injectors too, and through drugs a character received a change in his tactical and technical characteristics.

Promotion of perversions is done on the same principles as hidden advertising, it also uses manipulation of consciousness through similar images.

Most noted in this propaganda is the character of Herck. Here is an analysis of cutting out some of the moments from the missions with him:

A few more examples of propaganda from the game “Far Cry 4″:

• A man with a joint is painted on the main hero’s house. 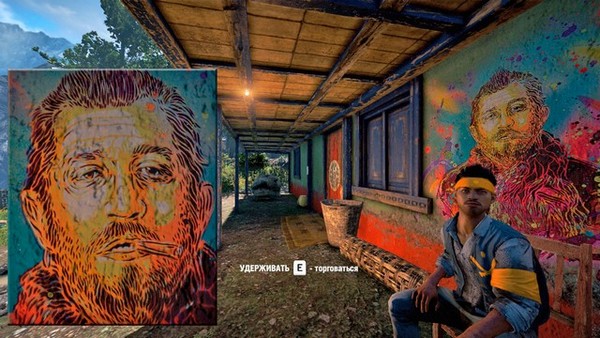 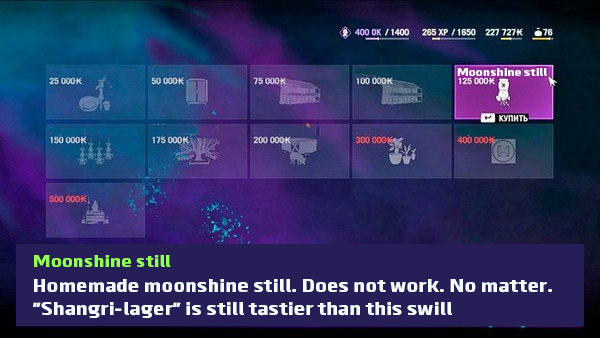 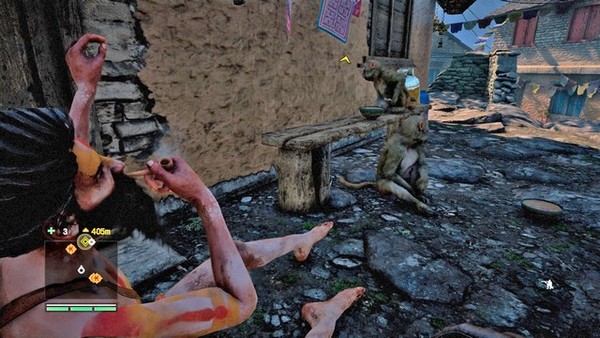 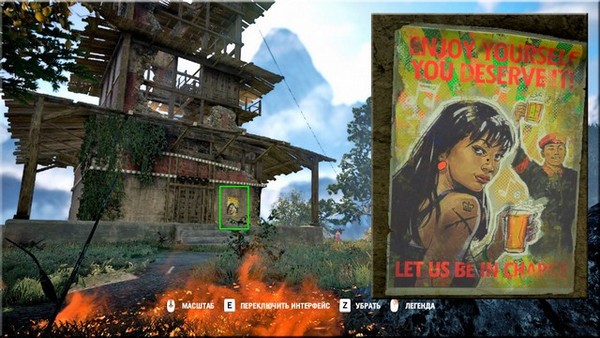 Translated by Daria Egorova with the help of Mark Novokshonov