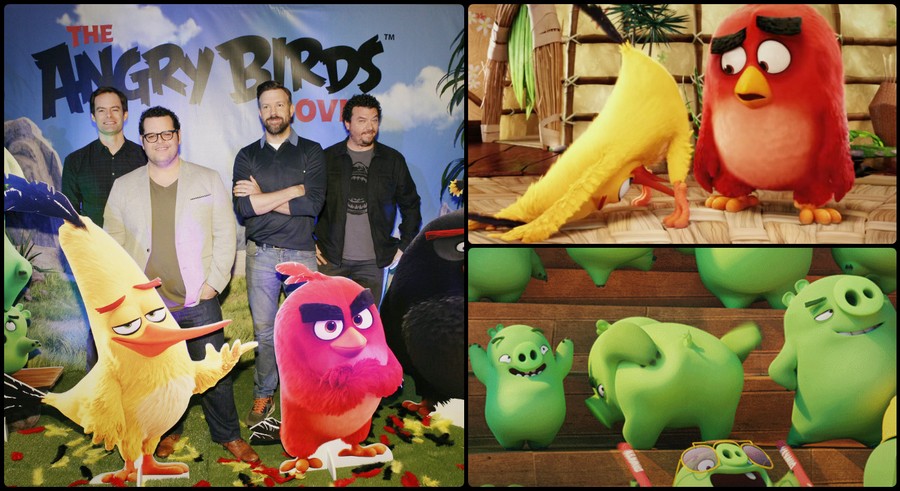 At a time when around us information environment is changing very rapidly, and every morning agenda includes dozens of new urgent and shocking news, the ability to focus on the really important things, to separate the significant from the secondary and notice trends, not just isolated facts, it is it essential to anyone who wants to manage himself and his life.

In this article, we will focus on trends in modern cartoons. Is this important topic? If you have children, or you imagine yourself in the future as a family man – the answer is obvious. If you live in the present day, you pass by, you are unlikely to be interested in that, what kind of people will be your children in 20 years, whose world will be largely shaped the modern animation. If you think naively that the cinema – it’s just a fun tool that practically does not affect even the young audience,  – to err is your right.
In May of this year on a wide screen in the world, showed a cartoon «Angry Birds «, made by the same name game. The painting, both in content and form of submission is quite standard for modern animation, the age limit – PG.

The main plot, though at first glance looks quite touching and sweet, but it is have the bad things. The protagonist – a bird named Red – a child can not cope with bouts of anger and rage, because of what gets into all sorts of trouble. When it began bothers the other residents of the town bird, Red had been sent to anger control courses, where he had met with some more antisocial elements, unable to control himself.

But then the city of birds attacked squad of pigs and they steals all the eggs, and now only the protagonist and his new friends can save the situation. For this, they trained all the other birds to become angry(hence the name «Angry Birds» ) and go to war to win in the frontal attack pigs. That is, in fact when watching a cartoon formed impression,  that does not control the expression of their negative emotions, hysterical, screaming, fighting  (in the cartoon are many such scenes, had shown with humor) – is not only normal, but almost the only winning strategy . 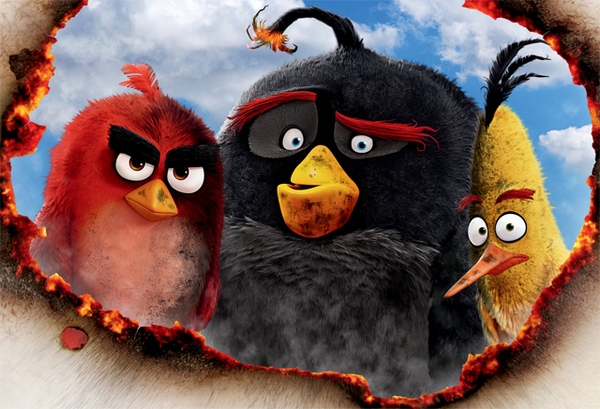 This effect is achieved, first of all, because that all the other inhabitants of the city birds are shown idiots, in addition to all they are conceited and arrogant, and their background is quite natural that intemperate and foolish behavior of the protagonists seems to be quite adequate. It is symbolic that even the mythical eagle, whom had worshiped the birds, had proved fat and lazy that even had forgot how to fly.

Actually, this cartoon  – it is a natural result of the film adaptation of the game, built on the principle of «shoot-destroy», whose sole purpose – to kill free time adult or distract children when adults is busy. 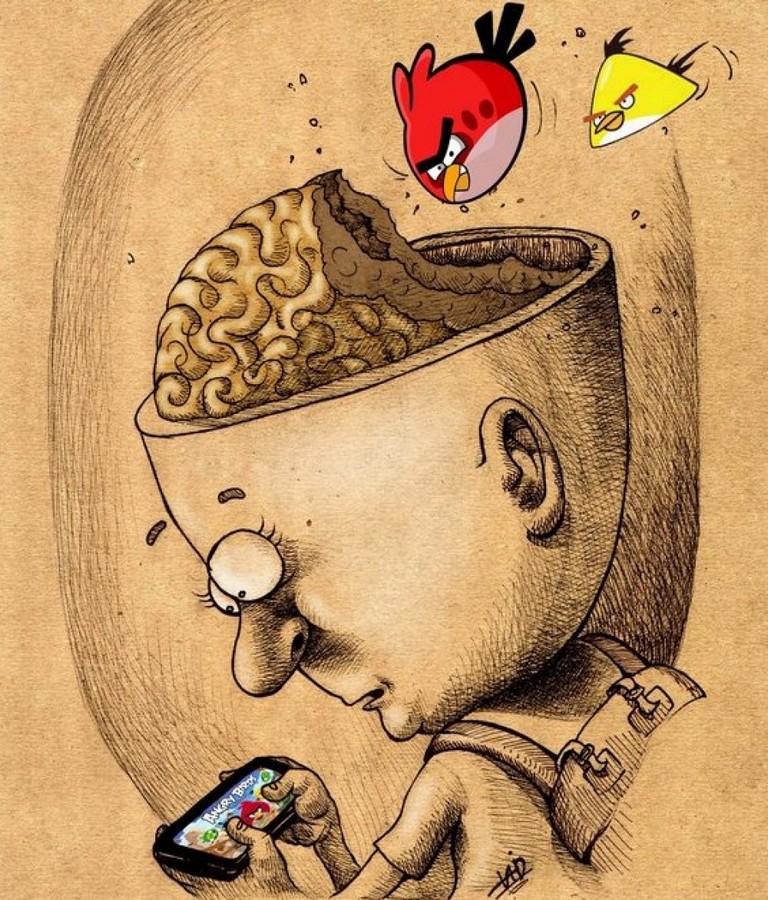 If desired, in the picture can be seen political implications, since all collisions on the plot unfolds between local cultural and birds «come in large numbers» pigs, to which the hosts initially exhibit too tolerant approach. But in the cartoon have not such constructive ideas, since the entire conflict is –  to force to resolve this problem by violence. To solve migration issues by violence – a road to nowhere.

It should be noted that the ending had the sweet the pill, and Red overcomes the main pig  not by means of anger, he do it with the help of cunning, but the overall story does not change. On the contrary, a happy ending in the form of salvation of eggs and destruction of all pigs fixes at young viewers a positive fitting on the admissibility of uncontrolled negative emotions in behavior. Needless to say, in real-life it could be  the only obstacle in resolving any issues, anger and rage.

The point is not that we should entirely reject any emotions, especially negative. Fits of anger, hatred and rage do not arise out of nowhere (even if difficult to immediately understand the cause, it is there), they are the body’s signal that something is wrong. And in this situation, to ignore the signal – it is essentially the same as that of «a blind eye to the problem.» But  take like the norm the negative emotions , as shown in the movie, also can not. So that in the future in such moments there is a need to try to understand what caused the bout of anger, analyze the situation, to see the causes of negative emotions and on the basis of the findings, to change something in yourself or in the environment (or in his relation to it) then in the future such problem will be appear  as little as possible.

And now about trends in modern cartoons. These we consider the example of all the same «Angry Birds», but readers will recall similar examples from other paintings for children.

First, something that most of people have already got used to not consider like something abnormal – it’s all kinds of shocks, falls, pushing and other forms of aggression and violence. This is usually served as something harmless and fun, it is something what you can just laugh about it . In particular, the cartoon «Angry Birds» begins with one and a half minutes of continuous series of falls of the protagonist. Then Red all the same manages to deliver the ordered cake, but because of the arrogant behavior of the customer smeared the cake on the his face. In general, every second joke in a cartoon based on aggression or suffering. 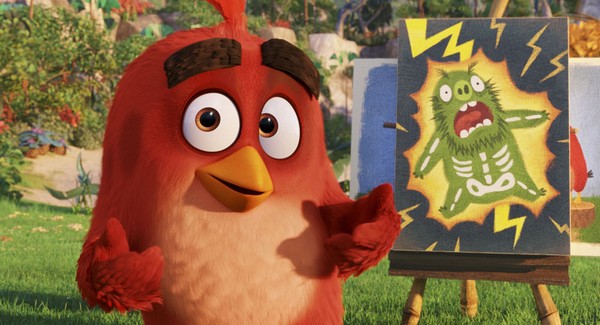 The second thing, which everywhere appeared in adult films, and now a childrens cartoons – is vulgarity. The jokes on intimate topics:

10th minute: Red talking with a mother with a lot of chicks says a phrase «Birds are no longer protected is not it?».

54th minute: Eagle spying on the bird, whom take a bath, Red calls him «the old lecher,» and the eagle stretches voluptuously «oh yeah …»

60th minute: «Pigs stole your children, and what we can do? We’ll make new babies! Lady, fly as quickly as possible, today would be a fantastic egg-laying! «(This monologue is accompanied by appropriate gestures of the character).

On the 29th and 37th minute  the characters discussing about the nudists and striptease. 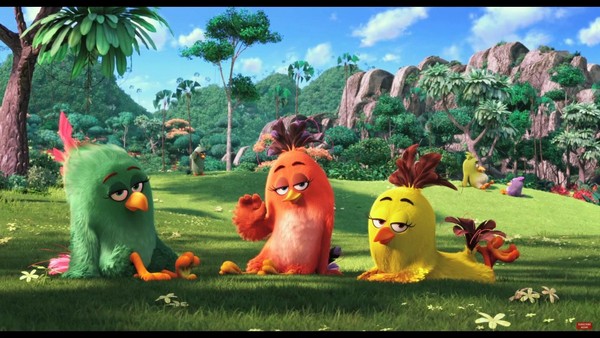 Secondly, it is dressing the male characters in the women’s clothes and all their uncharacteristic behavior. Thus, in the 41st minute  friend of Red named Chuck appears with a mask on his face and hair curlers on the head with the phrase «let this remain between us, dude.» In the 86th minute, all three main characters are discussing what they have pedicures. According to Chuck, «they went on a pedicure because  they are the worthy it.»

Third, the cartoons are increasingly emphasize the backside of the characters. We are talking about the fact that the camera focuses the viewer on a regular basis it is on this part of the body, and that soft spot becomes an occasion for jokes. To this argument does not seem far-fetched, look at this video from cartoon «Angry Birds». Note that in all cases in the frame male characters.

Another trend that has become almost the norm, it is the permissibility of the use in the cartoons in slang and expletives. In «Angry Birds» constantly heard words such as «dude», «complete bullshit», «dumb», «hang out», «cool», etc.

Complementing the picture, and an abundance of jokes on the topic of regurgitation, and other excreta. For example, on the 47th minute, the eagle (the one who served as a bird symbol of the city) urinating in the lake, from which the characters before had drank the water. On the 6th minute of the owl had sneezed twice with snot in popcorn of main hero; in the 16th minute sounds joke about bird droppings; in the 22nd minute mom «throw up» for her chicks in their packages for breakfast (this scene is shown with the characteristic sound of spit-up). 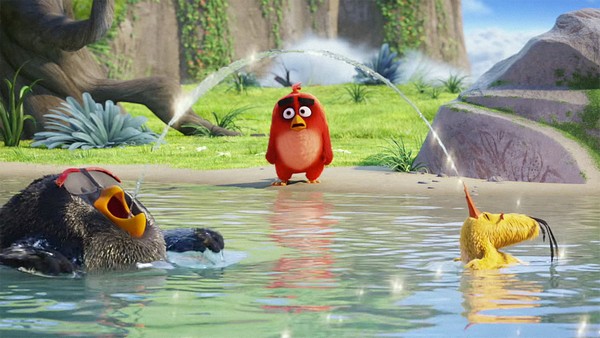 An excess of violence and aggression, pain and suffering of the characters are shown with humor.

The abundance of jokes on intimate topics.

At a party heroes are holding wine glasses with a cocktail in one of the scenes of a negative character is shown with a bottle of wine.

this Cartoon forms in young viewers primarily harmful behaviors. The vast majority of humor and jokes are based on vulgarity, stupidity and violence.

In the picture there are the following symptoms of harmful cartoon:

5+
Share:
Participation in the project
Tags:
Bad Bad cartoons Technologies
Also read:
The analysis of the cartoon «Planes: fire and rescue»
Features of the English version of the animated film "The Angry Birds movie"
Media and Children
Dangerous device next to you