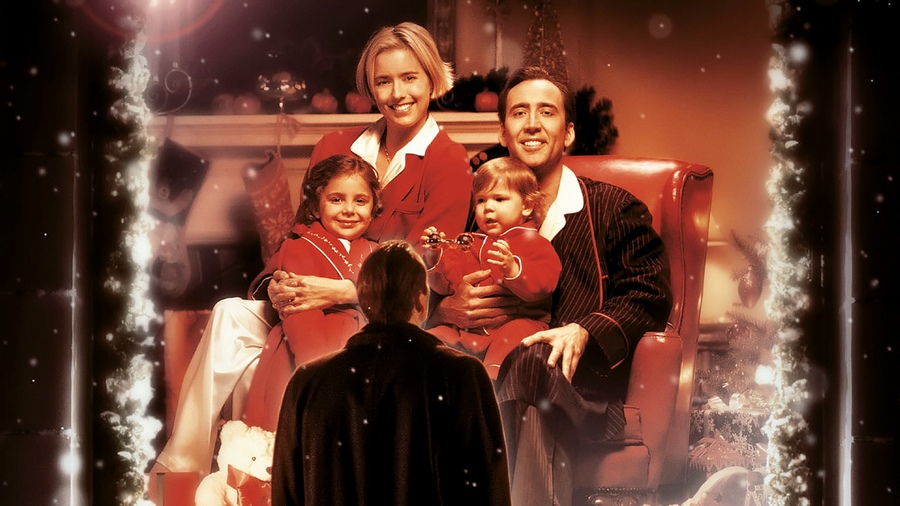 Review of the film The Family Man (2000) of the project What is good.

The Christmas melodramatic comedy The Family Man with Nicolas Cage in the title role hasn’t earned any special awards or multi-million dollar fees, however, the film makes you think about things which are more valuable than any money – it is love and family welfare.

The problem of choice is shown in this comedy standing before almost every person in modern society. It is the choice between real happiness and external success, money and love, free life and family responsibilities.

It is in the human nature to want everything at once, but you usually have to sacrifice something in searching of some better thing for yourself. The main character of the film was given the opportunity to understand if he had made the right choice many years ago. The most important thing is that this understanding came  to him in time, not in the old age when the person can only regret about mistakes, but in adulthood, when there is still time to change something.

Jack is a successful businessman, financier, director of a major company. He has no family, only occasional affairs, no hobbies, and other interests besides work. Once in his youth he flew to another city for an internship despite the pleas of his beloved Kate and stayed there having broken up with the girl.

Thirteen years later, on Christmas Eve, he made a good thing which was rewarded by the “hint” at the true value. Jack wakes up in the world where he is married to Kate and they have two children and their own house in a small town. In this world Jack is not a successful businessman, he works in a small company. Recovering from the shock, the main character tries to return to “his reality”, to get back into the atmosphere of comfort and well-being, which he used to have. But over time he understood that the real happiness is not in money and fame but in love and family comfort.

The first thing to note is that unlike many family pictures, this film shows a family with two children and a big dog in all its beauty, with its cares and joys. In the life of the main characters there are some difficulties: Cage’s character and his on-screen wife has to get up in the middle of the night to walk the dog or lull the baby asleep, change diapers, deny themselves in some shopping, experiencing financial difficulties. However, the film shows the joy of parenthood, beautiful children impossible not to love, these tender relations between spouses, the quiet cosiness of Christmas in the family circle and other small pleasures.

Such scenes are lacking in our modern films, especially comedies. Adequate, pleasant images of the parents and the child-parent relationship are rarely seen on screen. The film The Family Man looks like an exception.

We should also pay attention to the fact that the authors believe in true love, because neither Kate nor Jack found people with whom they could build serious relationship in the “real world” after thirteen years of successful life. Jack had just some companions, and Kate completely immersed herself into her work after breaking up, forgetting for a moment about her desire to help all people on the earth.

At first it seems that the film is a standard set of stamps designed to show in a not too convincing manner, that the family is more important than career, literally putting them on the opposite sides of the barricades. In such a situation, you can always say that it is easy to combine these two elements to be a successful person, especially with the talents of the main character, and a good family man with lovely wife and beautiful children.

However, as the story develops we understand that in this film the character has to face a difficult choice between happiness for his family and measured in monetary terms “success” for himself. The loving wife is ready to leave her home and everyday way of life for Jack, she is ready to go with him even in New York, wherever. But Kate understands that raising children in the noisy metropolis with dirty air and eternal traffic jams is very difficult, and the worst of all, the communication with his father in fact will be reduced to zero, because most of the times Jack will spend away from home. This realization comes to the main character too. Now Jack is not so sure that the comfort, to which he was accustomed, is the common good, and to make a choice becomes even more difficult.

The end of the film is sad and even tragic, because, as Jack was said in advance, “the hint can not be eternal.” The choice was made by him many years ago and all that remains now is to draw conclusions and to try to change his life after what he had seen and understood.

The film talks about decency and honesty. The main character got a chance to see a different life after he had bravely risked his life and tackled the seemingly crazy person. At first he avoids intimacy with his wife, knowing that Jack-Rich-Man, and Jack-Family-Man are different people.A Christmas angel, pretending the seller, checks the honesty of the girl, giving her some extra money for a change.

In the film, negative human qualities don’t get punished, but good deeds are rewarded. Good deeds give the hero the opportunity to rethink his life and understand where to go further.

The fly in the ointment

Unfortunately, the film, like the most modern Hollywood works, is not without disadvantages.

Alcohol is presented in several scenes, but it is not accented, though it is perceived as an essential attribute friendly get-togethers and family celebrations.

Sex scenes are absent in the film, but there is an episode with Kate bathing in the shower, over the age limit. At first the protagonist is shown as a wicked man that can have one-night-stand. Even once in "another world" where he is married and obliged by fidelity, Jack isn't opposed to spending time with a woman of easy virtue. Jack’s friend held him from this mistake saying that Kate (hero’s wife) is the most desirable woman in the town. While rethinking values, the protagonist attitude to the promiscuous changes. He comes to maturity and to the sense of responsibility for the family and for his actions.

The film skillfully tells that financial success is not the main attribute of happiness and sometimes to achieve the real, not imaginary boon you should sacrifice something.

Film Classification: PG-13
Export of the assessment
<a href="https://what-is-good.com/tv/films/film-the-family-man/"><img src="https://what-is-good.com/wp-content/uploads/2014/0/oc_g.png"/></a>
7+
Share:
Participation in the project
Tags:
Good Good films
Also read:
«Deadpool»: Is Killing Funny?
"The Amazing Spider-Man": When Human`s qualities are of first priority, not superpowe...
The film "Beauty and the Beast" (2017): Dangerous trends
The animated TV series “Star vs. the Forces of Evil”: what does Disney teach under the guise of...