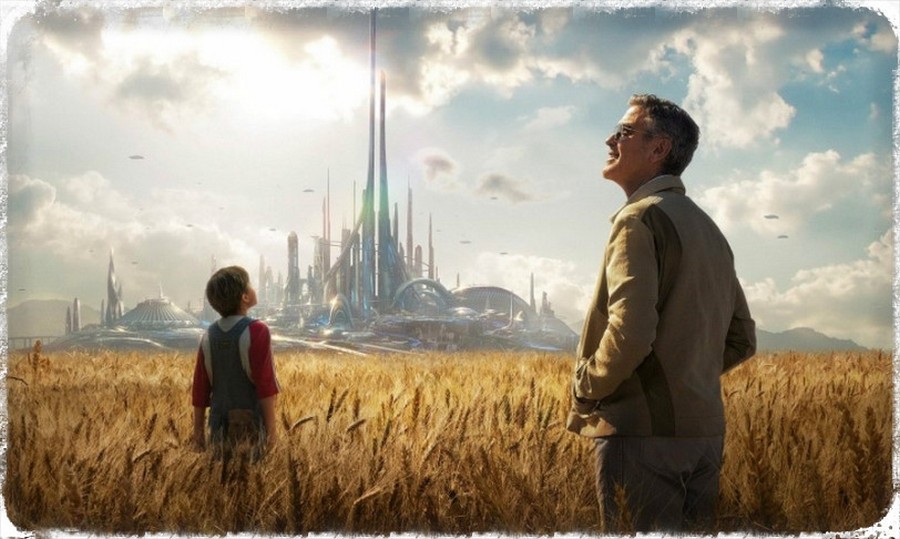 There are a lot of films nowadays showing the catastrophic future of our planet. The latest are: Interstellar, Mad Max: Fury Road, Elysium, both parts of Divergent. Most of time in these movies characters try to survive under the conditions of upcoming/happened apocalypse. The causes of the global disaster are different: a war, ecological catastrophes, new viruses, hunger. But there is one common detail in all these stories – an obsessive inevitability of coming tragic events.

Sometimes we are beginning to think that Hollywood has already put an end to the future of the human kind and now it only tries to guess what will kill several milliards of people. But even for the dream factory it is not so simple and clear, Torrowland by Disney proves it. We should indicate that this film got low rating and also for that reason it was not widely advertised.

The main female character with a memorable name Casey Newton studies at a usual school. But she differs from other people. When someone from teachers start telling about the problems of human kind in future, Casey always raises her hand and asks: “How to solve this problem?” She is not agree with those negative future imposed by the society, using as examples the worlds from “Brave New World” By Aldous Huxley or “Fahrenheit 451” by Ray Bradbury.

Trying to prevent demolition of the cosmodrome where her father worked, she went to jail, where she found an unusual badge. She touched it and suddenly appeared in a fantastic world. In several minutes while Casey was there, she knew that in that new reality people have high level of technological progress, learned to control gravity, fly to stars and built cities providing perfect conditions for life and creative development.

This image of the future impressed her so much that coming back to the Earth she decided to find out the secret of this new universe and understand the connection between our worlds.

Before going into adventure she tried to cheer up her dad who was losing his job reminded him the story about two wolves fighting in soul of every person.

Casey Newton: There are two wolves and they are always fighting. One is darkness and despair. The other is light and hope. Which wolf wins?

Eddie Newton: Whichever one you feed.

But life is much more difficult than the story about wolves. Casey will face robots, one of them will try to kill her, the other will help. She will learn how to use time machine, fly the spaceship hidden in the Eiffel Tower. She will meet a genius scientist who lost his hope and believed that the catastrophe is inevitable. One of the main ideas of the film is that the future is multivariant and depends on every person. But what is most important – Casey shall prove everyone and herself that human kind has light and happy future that will come true.

What does “Tomorrowland” teach us?

There are many layers of meanings in the film, and understanding them depends a lot on the worldview of the viewers. On the surface we see a good example of main characters shown in their teenage years as creative and talented kids, interested in technology and science. Despite all obstacles and lack of support from the society and relatives, they follow their dreams, do not want to accept unfairness and try to make the world better. 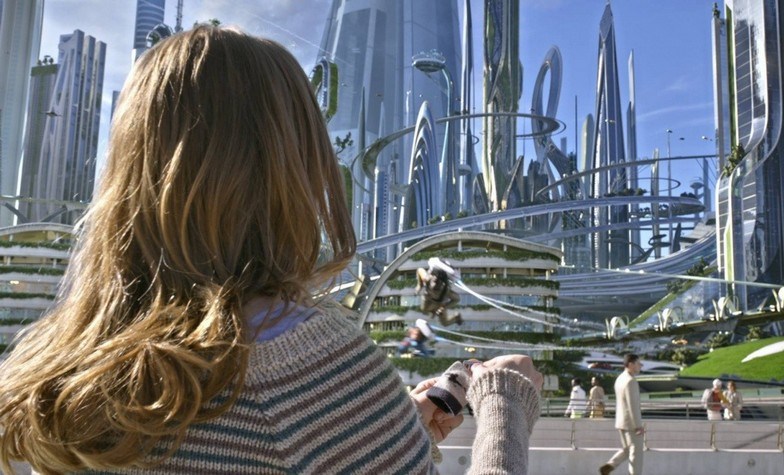 Second level of understanding shows us the influence of forecasting and predicting to lives of people. Coming again to the other world Casey found out about a tower broadcasting the images of catastrophe to all human kind. Creators of the tower try to convince the main characters that people of the Earth were and are wild and cannot be given any technology, and the coming death of human kind is a freewill decision of people who don’t want to do anything.

The owners of the tower: “How do you think people responded to the prospect of imminent doom? They gobbled it up like a chocolate eclair! They didn’t fear their demise, they re-packaged it. It could be enjoyed as video-games, as TV shows, books, movies, the entire world wholeheartedly embraced the apocalypse and sprinted towards it with gleeful abandon. Meanwhile, your Earth was crumbling all around you. You’ve got simultaneous epidemics of obesity and starvation. Explain that one! Bees and butterflies start to disappear, the glaciers melt, algae blooms. All around you the coal mine canaries are dropping dead and you won’t take the hint! In every moment there’s the possibility of a better future, but you people won’t believe it. And because you won’t believe it you won’t do what is necessary to make it a reality. So, you dwell on this terrible future. You resign yourselves to it for one reason, because *that* future does not ask anything of you today”.

Casey and her friends think different. They do not believe initially perverted human nature; they show the people become wild because of the tower programming people for apocalypse.

“You grabbed a signal from another dimension, from a machine here — that means it’s transmitting there. What if its not just predicting the future … It’s broadcasting it. What if the monitor is just a giant pin, but instead of making you think positive, it makes you think negative, and it — it’s convincing the whole world to feed the wrong wolf.” 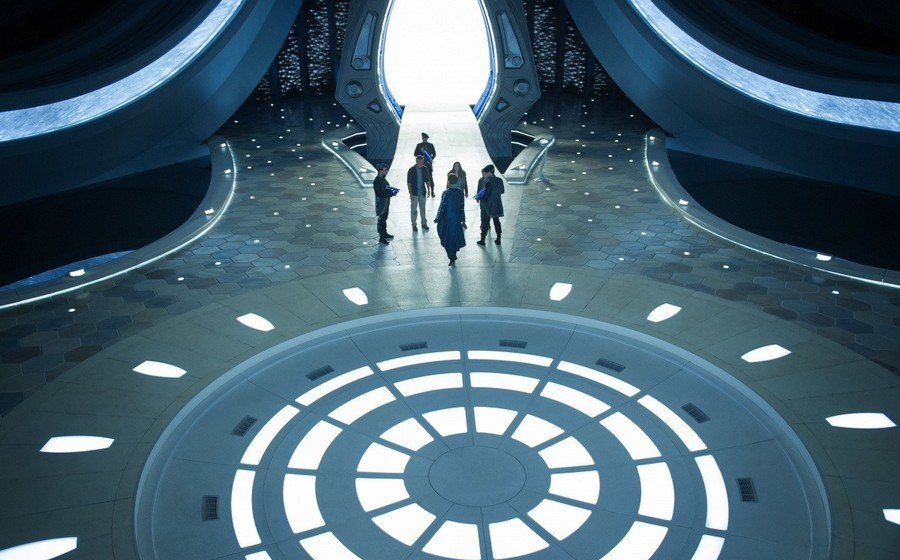 Film leads to the idea that future will be the one we imagine and create in films, books and games.

We shall support the ideas that make the world better, make us believe in the best future. We shall dream of it, not to be afraid of it.

Unfortunately not all main characters have good relations with their parents, and the only love shown in the film is between a human and a robot which learned to feel (in the beginning of the film they are children, but in the middle of the film robot still looks like a child, and the human became an adult, this situations looks really equivocal). But maybe it is better to show in sci-fi robots that can love instead of people so senseless that look like biorobots?

We would like to finish with a small dialog between parents and their child:

Eddie Newton: Why do you love the stars so much, Casey?

Young Casey Newton: Because I wanna go there.

Eddie Newton: But it’s so far away.

Jenny Newton: It’ll take a long time. A real long time. What if you get all the way up there and there’s nothing?

Young Casey Newton: What if there’s *everything*?

fighting, pursuits and killings, but blood is not shown

The film makes the viewer not only think about the importance of deliberate creating of the image of bright future, but also shows the technologies used to make negative programming of the human kind for global catastrophes. Main characters of the film can be a good example to follow. But in the same time the feelings between a human and a robot are debatable

Film Classification: PG-13
Export of the assessment
<a href="https://what-is-good.com/tv/films/tomorrowland-what-if-we-get-all-the-way-up-there-and-there-is-everything/"><img src="https://what-is-good.com/wp-content/uploads/2014/0/oc_e.png"/></a>
2+
Share:
Participation in the project
Tags:
Fantasy Good Good films New films
Also read:
The film “A Gift of Miracles” (2015): Life tells the right way
Film “The Neon Demon” (2016) Reveals The True Face of the Occult Elite
Cartoon "Hotel Transylvania 3: Summer Vacation": Information weapon against our child...
“Once Upon a Time in Hollywood”: on the responsibility of actors for the realization of their t...