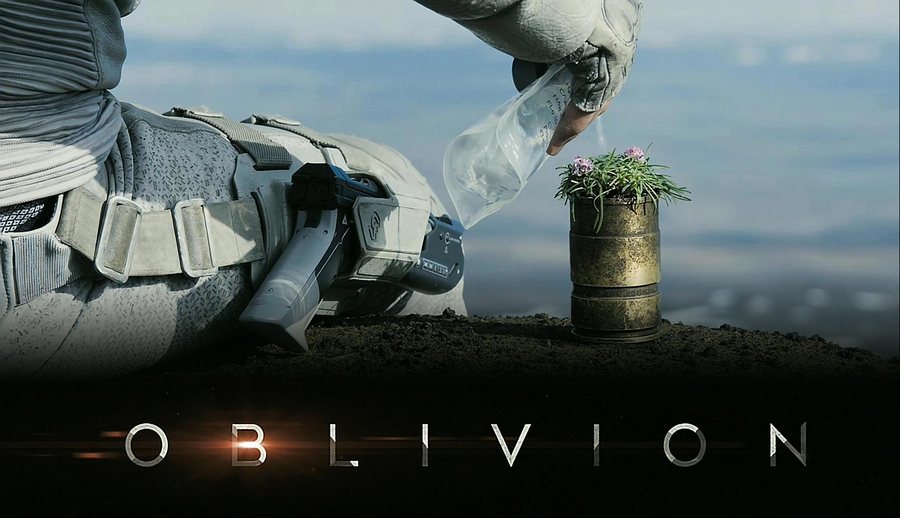 The review is spoiling some items

The film «Oblivion» by Joseph Kosinsky (the remake of Sci-Fi action «Throne» was his job as well) premiered in 2013. According to different sources the film is based on the graphic novel written by Kosinsky himself. However, the novel wasn’t published and had the aim to make the film more popular. The concept developed in the graphic novel by Kosinsky was used during the filming.

It’s the recent future. As it’s said by Jack Harper, the protagonist, the war began 60 years ago. The Earth has been devastated by extraterrestrial invaders named as the Scavengers. They have been destroying the Moon. As a result of this, the majority of cities and towns on the Earth has been wiped out because of avalanches and earthquakes. In order to win the war with the Scavengers humanity decides to use the nuclear weapon. They have been succeeded, but the price of peace is really high. The lands have been poisoned by big doses of radiation and aren’t the best place for living anymore. The people had built the temporary base and command-space centre at the same time – Tet. It is necessary in order to relocate the humanity to the biggest Saturn’s moon named as Titan. Jack Harper and his teammate Victoria are stationed at the Tower 49 called as re which is based on the Earth. They guard the hydro platforms which produce the thermonuclear power of the new colony on Titan from the sea water. The rest parts of invaders do some attempts to destroy the robots, the guards of the hydro platforms. Jack Harper is a Technician Engineer and repairs his electric assistants.

Jack Harper is the Technician 49 sees the strangest dream about pre-war times before his birth. It’s New York. Jack meets the woman there. He doesn’t know anything about her, but he’s sure that she is his soul mate. Sometimes he considers this not only as a dream, but as remembering. These thoughts make him to think about the sense of his life and to doubt about that happened in the world. His teammate Vika doesn’t care. They should complete the task in two weeks and will come back to the human colony. Their «super team» is moved to live in their new home and to complete their mission by saving the humanity. 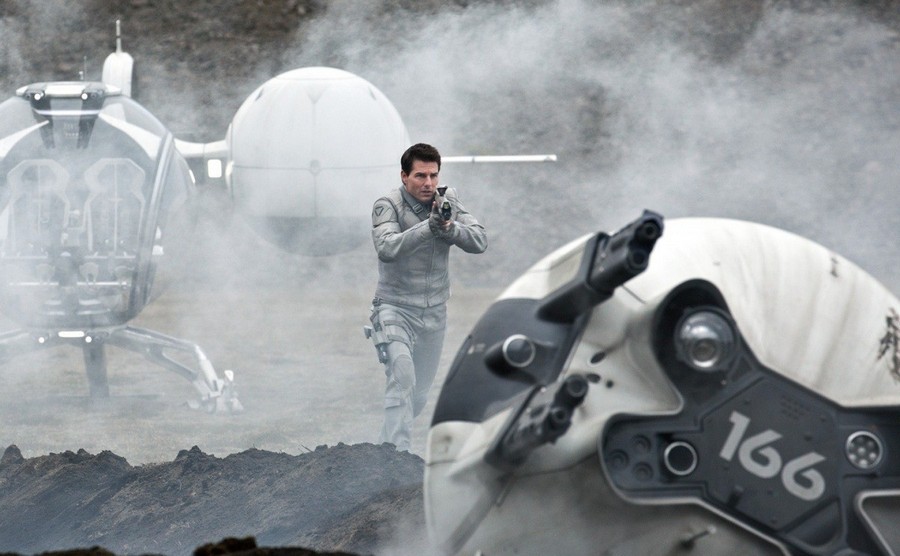 However, Jack says that the Earth is his home, which will never change. Later we are able to understand his love to native planet through small, but important things: the old-style Elvis Presley statue on the spaceship panel, the cap labeled NY and the baseball, his passion. After being taken at the Scavengers, Jack finds the book by Thomas Macaulay «Lays of Ancient Rome» and reads the lines:

«And how can a man die better
Than facing fearful odds
For the ashes of his fathers
And temples of his Gods».

Inexplicably, he is hiding the book when Vika came. Does it mean his mistrust of her? Probably, this moment is the beginning of Jack’s big doubts about what’s going on.

Jack delivers the book to the secret place where he can read and not be found by other people stationing at Tet. His love of native planet reveals there.

Vika is Jack’s teammate and the communication officer. She controls Jack’s job and coordinates flights with the command centre. She doesn’t suffer from deep philosophical thoughts two weeks before completing the task as Jack does and wants to live on the Titan human colony. What role does she play with Jack? Probably she assists him in order to distract from philosophical thoughts, which could be too deep staying alone. In reality, the way of realizing the situation will be easier without her interference. Vila is the latent way to manipulate Jack. 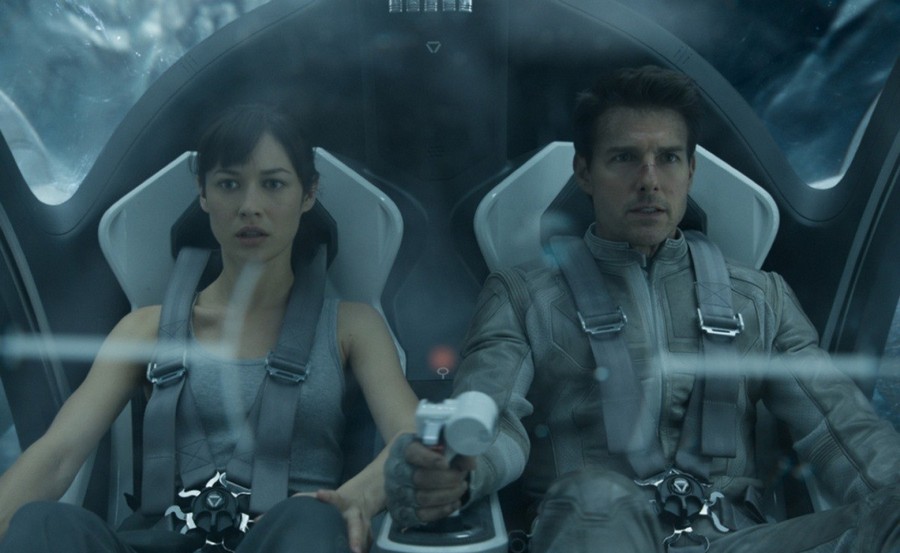 Then something happened that radically changes the life of the Technician 49. He recognizes the woman who dreams about close to the broken spaceship in the one of containers for people. The robots which basically are supposed to protect start killing people.

Later, Jack knows that the dream girl is Julia. They used to be married in the past during the pre-war time. They are captured by the Scavengers together. It turns out that the Scavengers are not aliens, but people are taking part in opposition. Everything is turned upside down. The shroud of oblivion has begun to drop. People lost the war and were destroyed by the aliens. No nuclear bombs, but a victory that no one will celebrate. Tet is the alien base. The Titan colony is the illusion as the life story of Jack. Jack Harper is the clown who has been produced by Tet to complete these or those functions on the captured Earth. Moreover, he is not the only clown on the planet. The question is how aliens make him to do his job and to serve as Technician 49? He does his job, voluntary and has even enthusiasm. The answer is pretty simple: the ideal slave is that who doesn’t understand he is a slave. The aliens make Jack to do his job not with help of weapon, but with the help of new social technology. He was placed in the special social environment without true past, but with the dream (to live on Titan) and with the realizing what he can do for the humanity. Does it a good way not to be in doubts about the evidence discrepancies after identifying them?

Lie, covering the truth, misinterpreting the past and wiping out the memories are the instruments to make Jack a slave, to «kill the humanity» and to make him to serve the wrong master, to complete the wrong aims. Is it possible to find the way of spiritual liberation? This way is called the hard truth. Malcolm Beech (Morgan Freeman) is the leader of the human opposition. He tries to deliver that hard truth to the people and helps Jack to get his memories back. Beech has chosen Jack among the number of other clones after seeing him reading the book of poems. Technician 49 also saved his grandfather from robots. Beech suggested Jack to complete his aim for humanity, i.e. to save them by destroying Tet. Jack agrees and bravely loses his life declaiming «Lays of Ancient Rome»:

«And how can a man die better
Than facing fearful odds
For the ashes of his fathers
And temples of his Gods». 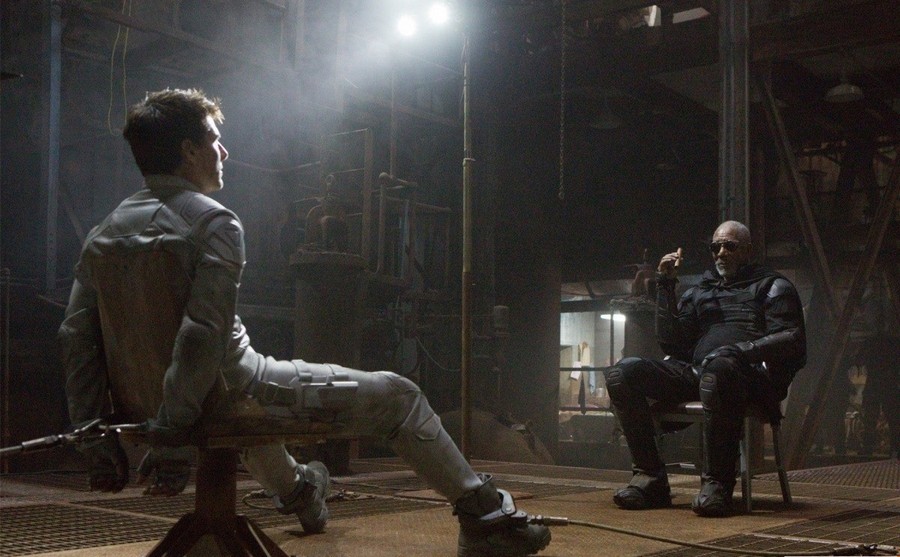 By the way, Horace, the protagonist of the lay, fought with the huge army. Two friends were fighting on back to back and dying on the battlefield. The bridge was destroyed by the Romans in order to Etruscans, who were following them couldn’t cross the river. Horace saw that and realized that the enemies couldn’t cross the river. So he jumped into the Tiber River and swam to the Roman shore. As you see, he hadn’t died at the end, but had been miraculously saved.

You can see that Horace’s saving and Jack’s saving (he has died but has come back to Julia as Technician 52) have common features. Let us consider crossing the river and Horace’s landing as the symbolic death and rebirth. So there are two parallels.

No drugs were shown.

There are some shooting and killing scenes in the film.

«None are so hopelessly enslaved as those who falsely believe they are free…» It is hard to face the truth but it is the only way to be happy.

Film Classification: PG-13
Export of the assessment
<a href="https://what-is-good.com/tv/films/oblivion-is-not-forever/"><img src="https://what-is-good.com/wp-content/uploads/2014/0/oc_g.png"/></a>
4+
Share:
Participation in the project
Tags:
Fantasy Good Good films
Also read:
Film “Me before you” (2016): Suicide propaganda in vanilla-sugar-glaze
The F Word: Overton window in action
The film "Peter Rabbit" (2018): Fluffy thieves and murderers
A program code of the movie “Men in black: International”