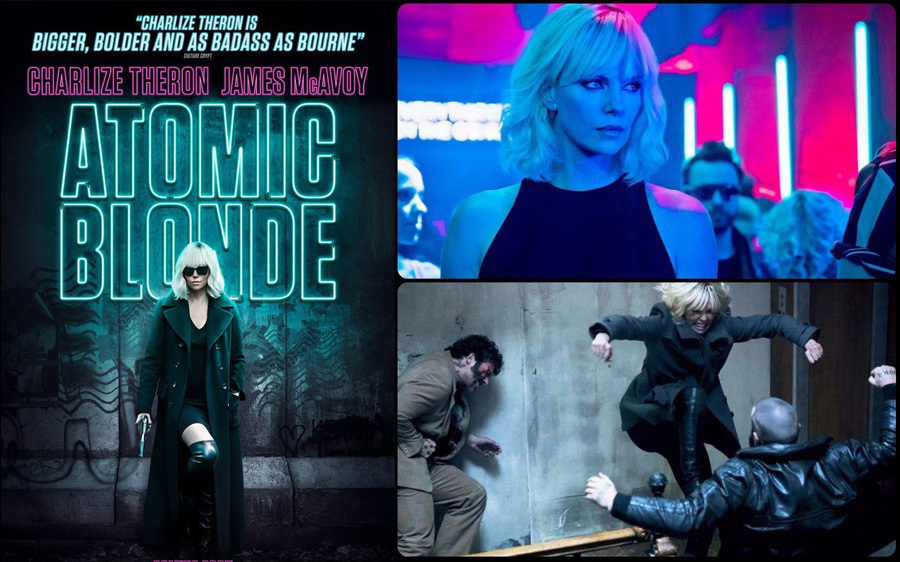 Review of the film Atomic Blonde (2017) of the project What is good.

At first, everything seems clear from the trailer – here you are slim Charlize Theron, killing hand to hand a dozen of men-squad; here there are scenes of smoking and drinking alcohol, colored with tantalizing vision and elevated halo of the very same heroine; a “crux of the biscuit” – is explicitly announced lesbian line. What else does one need to film an absolutely degenerative movie, you may ask? But authors bent their fantasy and tried wholeheartedly.

Year 1989, the reunion of FRG and GDR, and exactly this time in East Berlin arrives Loraine – a British secret service woman (in reality the American one, and also a double agent in the Soviet secret service). She has a new mission, which she has inherited from the murdered colleague and pluralistically her ex. Straight after her arrival the heroine gets into a whirl of activity, a spy’s game begins, which, as it usually happens in the American cinematograph, is shown not as a battle of wits, but as an ability to shoot, fight and run away well.

So what the given meal consists of?

Of the unassailable heroine, whom dozens of trained men from different secret services and nationalities can only take the shine off her face, instead she masterfully and cruelly kills everyone in shot, who is standing on her way. We should separately say about how in the film KGB agents are shown – all well-matched beefy, tattooed, with brutish and uncharged with intellect faces. By their behavior – endlessly cruel, aggressive, with criminal habits. 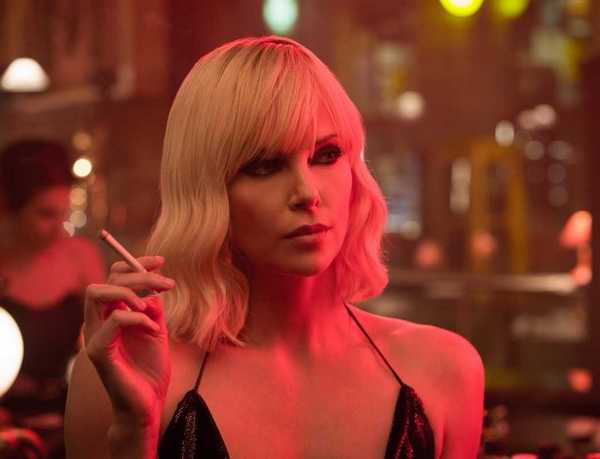 Of propaganda of alcohol and tobacco. Since in the interims between epic scenes of punishment throughout the whole film Charlize Theron manages to pose with a wineglass and a cigarette in hand, a reasonable question arises – how she, smoking so much cigarettes and constantly drinking hard strong “beverages”, has managed to keep proper appearance and, mainly, – excellent physical abilities? It must be superabilities presented here.

Of lesbian line, looking awkwardly in the plot, superfluous and also very unnaturally romanticized. If one tries to peer in motivation and characters’ logic in order to understand how and why relationships began between them – it is unreal; this is the question without an answer. Oh, rather, there is one answer: the authors needed to bring this in the film, just in order this to be there. For the sake of same-sex relationships propaganda (after all if in Disney fairy tales authors have started to implement plot lines with perverts, then movies of category R won’t surely come out without this – an order from above), for the sake of propaganda of vulgarity with the use of explicitly pornographic shots and for the sake of radical feminism promotion. You won’t find here any man, whom you might respect – there is a heroine, men-fools, men- rascals and her affair, naturally, tragically killed by a man. 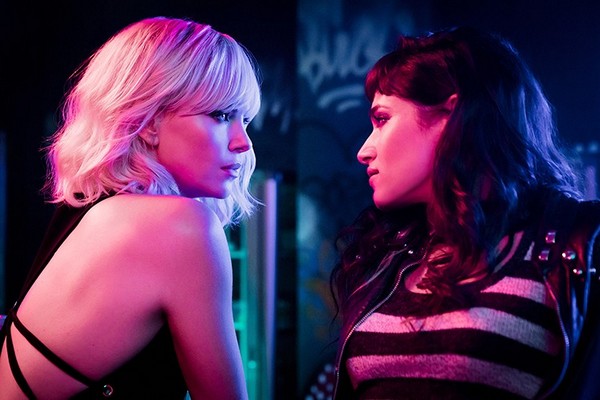 And the main thing – of aggressive propaganda against Russian people in general and Soviet Union in particular. The authors have wrapped in the picture all crazy stamps about communists and soviet system. In East Berlin everything’s, of course, dirty and grey, barbed wire, patrols, angry military are everywhere etc. The Russians in the film are shown as filthy people, torturing children for fun. This is not a metaphor, but one of the scenes (20th minute), where a Russian spy beats a teenager to death. The logic and motivation of his act are absurd, since the interested question he has asked to the rest of teens already after the death of their mate. It is normal and adequate policy – to bring up patriotism in its audience through cinematograph. But the US does not raise patriots on historical examples of its achievements. Hollywood engrains the Americans the ideology of chosenness, implementing “pseudo patriotism”, based on the hate towards the rest of nations. The authors of the film through the eyes of Lorain hate everyone – the British, the Germans, the French, but mostly the Russians.

In the finale the main heroine victoriously says the following phrase:

– I made everything to destroy your regime! 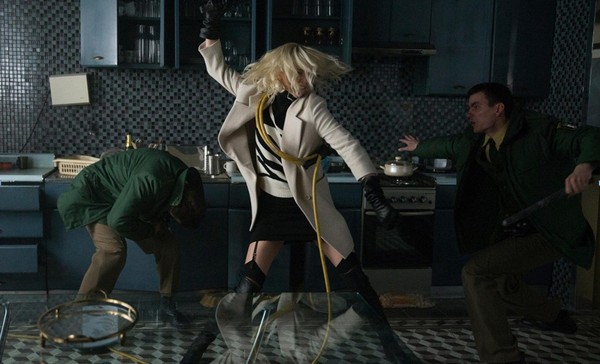 The heroine constantly smokes and drinks hard beverages – including from the bottleneck. At that stays physically fresh, supernaturally strong, fast, dexterous and intelligent. The standard trick of propaganda of alcohol and tobacco, when by using the scenario and visual backdrop, the viewer is being implemented false impressions about the consequences of self-poisoning.

Lots of scenes of fights and murders, violence is explicitly being sexualized through the attractiveness of the main heroine and her dresses. Another rollout of socially-harmful image of a woman-warrior.

The movie “Atomic Blonde” for two hours has managed to contain in itself all ideological filth, systematically translated by Hollywood, and made a special accent on violent aggressive propaganda of Russophobia and hate towards the Russians, Russian classics (which has been turned into a musical background for sadistic scenes), the Soviet Union.

Adverse film indicators, which are being observed in the film “Atomic Blonde”:

1. Film highlights the value of personal success and prosperity, regardless of methods to achieve them. Immoral or even criminal behavior of film characters is unpunished or even results in life improvements: gaining recognition, popularity, wealth, etc.

2. Film storyline propagates non-committal and so-called free relations values, casual relationship, extramarital sexual relations are shown obligatory or at least approved. The viewer is imposed the excessive value of sexual life. This results in defamation of institution of marriage and family, as well as pudicity.

3. The plot of the film contains obvious or hidden propaganda/advertisement of intoxicating substances (alcohol, drugs and cigarettes), propaganda of health-detrimental behavior (fast-food, club life, laziness, etc.). The way of propaganda is giving these bad habits to positive characters of the film.

4. Film can propagate race, national, religious, class or other exclusiveness and intolerance; disparagement and disgust to social and material inequality, maturity and physical defects is demonstrated as a norm of behavior. The ideas of the film create clan system and stratification in minds of viewers.

5. Meaningful and ideological content of the film forms negative image of Russian people, discredits Russian history, presenting their way of living, thinking lame and inferior. Achievements of the Russians are being devaluated, true value of particular historical events is being replaced.

6. Film shows only decadent apocalyptic future without any alternative for the country or human race and our planet in general.

7. Film shows physical strength and violence as the main tools to solve problems and fight against evil. Aggression is endorsed by people around, detalization and vividness of violent episodes do not match film genre or age category.

8. Double standards approach and “convincing that black is white” are widely used in the film for designation of vicious and socially dangerous events. Neutral, non-evaluative or even approving approach for explanation of these events to make them look softer is also widely used.

9. There are almost no positive characters in the film, whose moral and norms of behavior can be an example to follow and empathy.

10. Positive characters of the film have low speech culture, use slang, abusive nicknames.

11. There is a great shift in gender social roles of film characters: male characters look and behave like female, and vice versa.

12. Film characters demonstrate nontraditional sexual orientation or emphasize their positive attitude to it.

13. Film contains pseudo-erotic scenes, where sexual contact is shown with too much uncovered detalization.

Export of the assessment
<a href="https://what-is-good.com/tv/films/film-atomic-blonde-2017-all-ideological-meanness-in-one-plot/"><img src="https://what-is-good.com/wp-content/uploads/2014/0/oc_r.png"/></a>
5+
Share:
Participation in the project
Tags:
Bad films New films
Also read:
The film "Gifted" (2017): Talent - a gift or a challenge?
With what has the TV series “Supernatural” ended up?
A program code of the movie “Men in black: International”
A simple decision