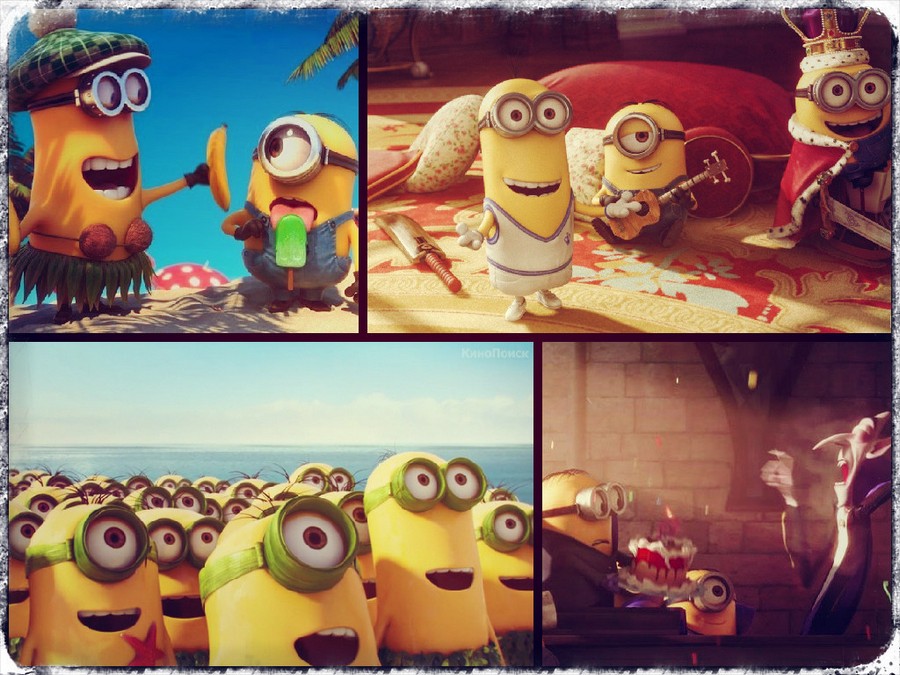 In the very middle of the summer holidays 2010 the cartoon Despicable Me was released on the screens. It was about a super villain who had to become a stepfather for some time and as a result he has changed and become a kind man. However the main concept was in small funny helpers of the main villain the Minions (from English this word means “servant’).

A million of small yellow men speaking on an unknown language and behaving a bit strange attracted attention of the audience. As a result Despicable Me had a continuation, and the Minions became a brand and in 2015 July, 9 the spin off Despicable Me devoted to these Minions was released on the Russian screens.

Well, what can be strange about these small funny guys? But if you think about it, you will find a lot of hints and concepts in the Minion’s brand itself and in their history. Let’s find out.

Who are the Minions?

If it was unclear in the first cartoons who they are and where are they from, the trailer of the new full screen film gives the answers to all the questions: according to the legend the Minions were on the Earth long time ago starting from the Dinosaur times.  Because the three of them from Despicable Me took part in the 17th century events, it becomes clear that they are deathless. Their main aim is serving villains. Without controlling they go to depression. They find the worst villain and trust themselves to him serving him serving faithfully until he dies and after this they look for another one. They can not be named as people because they don’t have any children, or elderly people or women. And now let’s watch the trailer to this new cartoon.

What was shown in the trailer?

The trailer is very expressive. Beside that information that we already know about Minions we were also shown the following episodes during three minutes: some cases of death one by one;  disguising the Minion into a woman with a big breast which he shows to a stranger; dressing a woman swim suit;  a married man with mustaches in the bright red dress and with  make up; a mockery at the ill man and a kick into groin; the bright performance of the torture room and in the same episode the game with gallows; the Minion in strings; the Minion kissing something he treats as two women in the Jacuzzi.

But the most impressive is not even that fact that the main heroes of the children cartoon are shown as boys and then as girls and serve the evil man but that they are shown from the positive side, funny and nice characters the children would like to follow the example.

According to the previous cartoons it is already known that the Minions don’t only make bad things but also do good things. All the time they helped villains of the whole epochs but accidentally they were the cause of that fact that villains died in most cases: Dracula was burned, Napoleon was shot. They fight and then they perform on a wedding, they eat ice cream in a cute way and then go to steal the Moon. They served for a villain and showed a great delight from their mean plans and later with the same delight they are so happy with his plans of saving the world. Try to read out this list to your child and then ask the question which always the child asks while watching films and cartoons – are the Minions good or bad, kind or evil?

Your child will not answer your question and it will be difficult for an adult person to answer. So in the child’s psychic the notion of bad and good will be unclear in the cartoon for the 6+ category. You can be cute but fight for a banana with somebody you know for many years, take things which belong to another people and help villains.

And one more moment – the Minions as it was already mentioned come from the word “servant” and their absolute subjection to a villain who can produce the weapon of the death from the one hand and from another  – producing ice cream just one more emphasizes their meaning. They are servants having been created to serve, they wear uniform, they don’t think over orders and only in the evening they can afford to do some their own things which are mostly fighting, mean jokes and mockery one under another.  Isn’t this the typical model of the modern consumer society which the West imposes on us in so active way? The same creatures without their own opinion or the sense of life or some moral qualities who want just to serve.

And one more question: what kind of sex are Minions?

According to the names the main heroes – Stuart, Bob and Kevin – are definitely men and the man traits are inherited in them. Sometimes they even “fall in love”: in the cartoon Despicable Me 2 the Minion Stuart fell in love with a woman. But the authors deliberately focus the attention on that the Minions can be a girl.

In the new trailer a Minion goes out of water and having seen that everybody are in the swimming trunks but he is not, he goes back into the water frightened and goes out but now in the bra (0:36). Having been kicked into the groin (2:23), the Minion is surprised at first but then he laughs showing that he feels no pain.

The authors definitely show that Minions are bisexual and if they wish they can be a boy or a girl when they want and in what way it will be better for them. We tell you once again that the main aimed audience of such cartoons are kids and the though of not only tolerance to the perversion but also about changing the sex that is absolutely normal is given into the consciousness of children through such images. 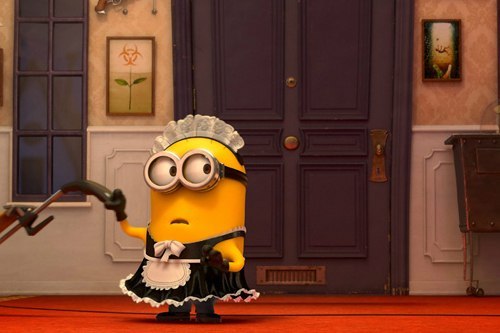 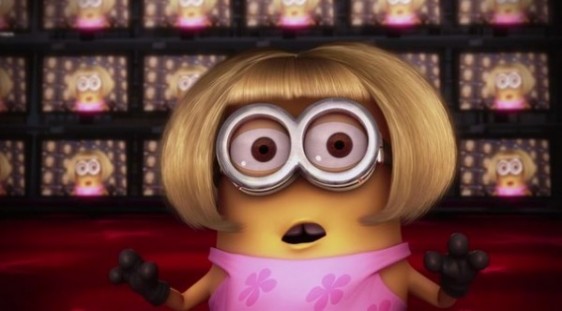 The models of behavior

And now let’s speak about how the Minions communicate with each other. In spite of that fact that the main heroes know each other about thousands of year without exaggerating their relationship can not be said as friendly one. They always argue, mock at each other, and laugh at any false step or failure of their friend.

In this extract it is seen how one minion wants to hit another with the stick, then one laughs at the other, then they fight and at the end of the scene while one is stolen by unknown evil, the other frees him and with the incisive smile see him off into uncertainty. 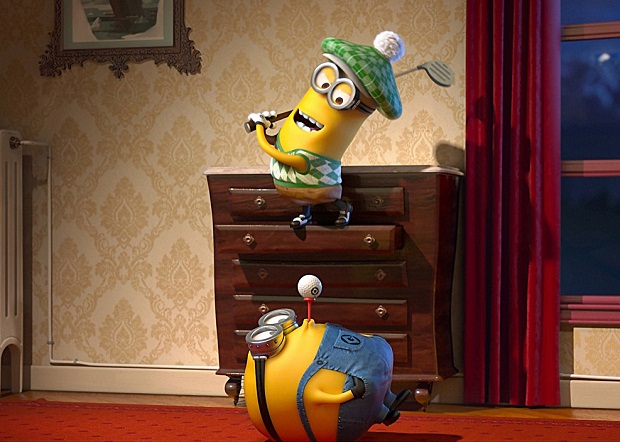 How will the child behave after having watched this scene? What does it teach? Definitely not friendship, care or mutual help. In spite of that these yellow characters can join their forces in some situations as for example when they need to do some bad thing, it is not about the team work because here  the thing is without doing some bad thing to another in order to differentiate yourself from others. During one cartoon they fight for the control stick, for the computer and the others having seen the conflict just cry “fight-fight” and watch it with pleasure. While one fighting the Minions can not only hit each other with their thin hands but they also can hit the head over the table using things around.

Such words as honor, conscience and dignity are just not included into the circle of their notions. The Minions trust only their evil master and their ego and they more look like the ball of rats ready to eat each another for an award or any bonus from the side of their master. This cartoon teaches exactly such models of behavior.

Let’s make a summary. The brand “Minion” is aimed on:

The unclear notion between good and bad: the Minions are villains and help villains and this is the sense of their deathless life but they are shown funny and nice, they do both bad and good things thereby washing away the notion “good” and “bad” in the conscious of a young person.

The propaganda of perversion: the Minions can be boys and girls as they wish or depending on their mood.

Education of unquestioning and unthinking obedience: the Minions themselves are just servants, and, as it was mentioned, they don’t care what ideals to serve. It turns out that the spinning around the world a new idols brand for children is a “funny servant” without any moral norms.

Education in the audience of individualism and competition for small goals: the Minions are very cocky and boastful; they fight each other just to show off in front of the master or for fun. Despite the fact that the minions are familiar thousands of years, they have no friendly relations.

The promotion of vulgarity: the Minions are extremely immoral guys, in fact they hint at some things that did not fit into the rating “6+”. 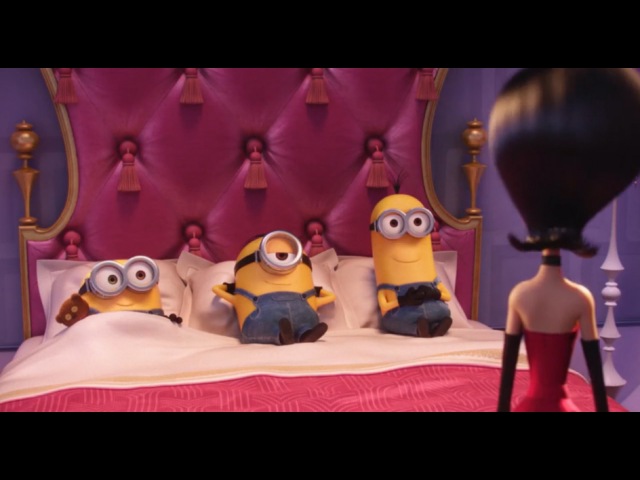 Do not show your child this cartoon, tell your friends about it harm for the child’s psyche and join to our team in the morality revival in the media!

Courage, my friend, publicity is our power!

Export of the assessment
<a href="https://what-is-good.com/tv/cartoons/who-are-the-minions/"><img src="https://what-is-good.com/wp-content/uploads/2014/0/oc_r.png"/></a>
4+
Share:
Participation in the project
Tags:
Bad cartoons
Also read:
The cartoon "The Boss Baby" (2017): Ideology of child free for the littlest
Features of the English version of the animated film "The Angry Birds movie"
Discreditation and devaluation of parenthood in "Disney" production
Cartoon sample #1: "Tom and Jerry", "Miraculous: Tales of Ladybug & Cat Noir...