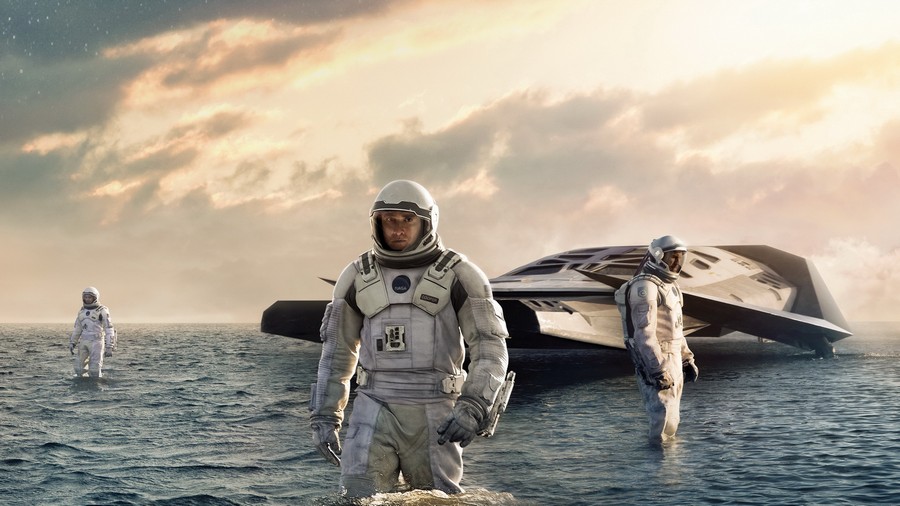 The film «Interstellar» directed by Christopher Nolan triggered waves of enthusiasm and praise comments. There is some criticism, but it is mostly about technical and narrative aspects. The most popular things to discuss in numerous reviews are the film content and its plot. Everyone noticed that the film is good for those who like science, physics and philosophy and bad for those who visit cinema just to chew some popcorn. Let us consider what the director encourages to think about and what problems he resolved.

The humanity caused the climate and economic crisis on the planet. So everyone was dying slowly of hunger and different unknown diseases. You can see the tornado of dirt and dust happened frequently and meager crops in the fields. According to the conversation, it was clear that the times of capitalist richness were the good old days. Scientists said that the planet was able to support the one generation only. Then there would be no more chance for humanity to live on the Earth.

No wonder policy makers tried to solve the problem with the help of standard methods. According to the scientist we see that recently they have started «to drop bombs from the stratosphere onto starving people. When they realized that killing other people was… not a long-term solution». Probably this situation was the result of any war or the well-developed countries tried to reduce «the extra mouths to feed».

Then the policy makers changed the attitude: they provided funds for the agriculture support and the struggling against diseases. This became obvious according to the dialogue between the main hero and a school principal. It turned out that the protagonist’s son had to work as a farmer without any chance to become IT specialist, engineer or the scientist. We can conclude that science and IT area are not for everybody. That upset the father, the space idealist and the experienced specialist. He is suffering nostalgic moods about the good old days with technical progress. He was seeking something.

The next stage in the plot is the protagonist’s finding a secret object. There he found out that the politicians were financing the pig project of the space colonization that has been made possible thanks to new space anomalies. They suggested the hero take part in the space expedition. It was with heavy heart that he said goodbye to his family. So the adventures start!

As usual, misadventures have led the heroes, not to the peaceful corners of the space, but to the orbits of the black holes, to the planets with stormy winds, timing and gravitational anomalies, and icy deserts. As the film creators said, everything is science-based.

This part of the film full of Bradbury’s and Azimov’s moods is really exciting.

However, as a result of all troubles, the heroes should decide to save people on Earth, through finding the new technology of overcoming in the black hole area or to find the new colony on the other planet (they have enough frozen embryo in the spaceship storage bay).

Views differed concerning what is better to do. You can see the «abyss of science magic». As a result the hero sacrificed himself for completing the mission and found how to transmit the helpful information to Earth by using space and time paradoxes.

So, this is almost the end of the film. What happened to humanity finally?

– After miraculously escaping the death, the hero found that himself as famous person on the Earth. His daughter was popular too (the hero told everyone about secret technology through her). He is a celebrity and respected person. 90 years from the start of expedition past, but he is still young thanks to slowed time progress in the space. 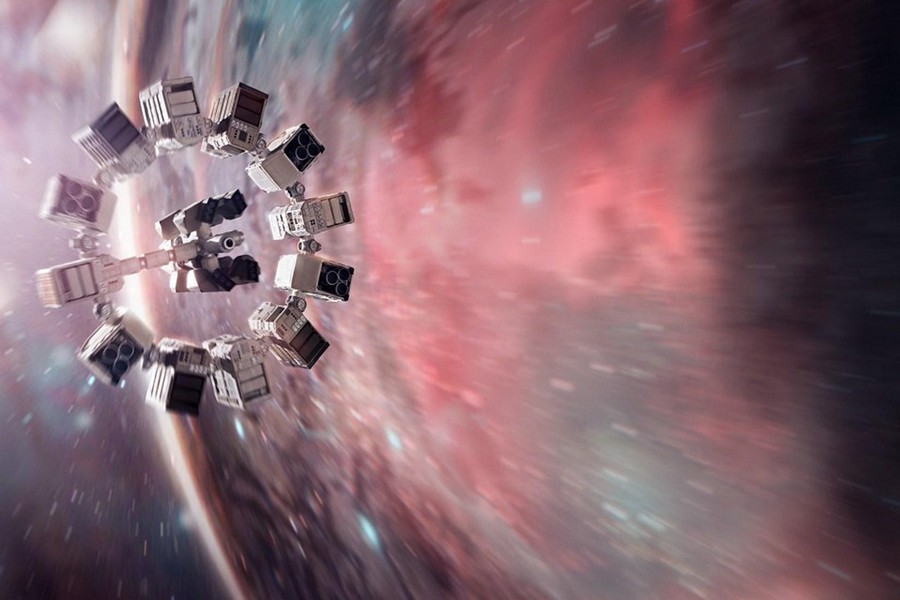 – The saved people lived in the space station, which was built thanks to the anti-gravitational progress.

– As for about the Earth, it is very unclear. Nobody said anything about our native planet. The first thing that comes to mind is the film slogan: «Mankind was born on Earth it was never meant to die here»

According to the plot, the planet had enough food for one generation, when the hero left. 90 years mean, at least, 3 generations. So, the planet was not able to feed all of them. However, we know nothing about some remedies to improve the life. Throughout the whole film people were finding the technology of anti-gravity, but they said nothing about new planets at the end of the film. The only protagonist’s dying daughter asked her father to go to another planet where his colleague, another astronaut, had already laid the first building block of immigration. We don’t know whether it was some colonized planets.

There are credits at the end. The deeply moved audience is leaving the cinema.

Let us reveal the moral problems, which were invisible while watching the film for the first time:

1) The exploitative and egoistic mankind approaches to the biosphere. Everyone realizes that human is the main reason of every catastrophe on Earth. Instead of usual technological disasters the author shows the new mutated substance which is decimating the entire crop. «Earth can’t handle us», – said one of the characters. Don’t you want to ask back: «Are we parasites?»? Then it doesn’t show the any changing in morality, the revaluation of private and public life. The «science magic» resolves the conflicts based on the numerous facts describing place and time. «Deus ex Machina» is the Latin calque meaning “god from the machine”.  The mankind saved without any effort by people, which means that their attitude to the planet will not be changed. It will be repeated more and more. Then the hero will save everyone.

2) Egocentrism in the relations.  Any their problem is a result of inability to come to terms. Roughly speaking in this film you can see how the group of egoists persists in the different situations and problems without any effort to agree on their action with each other. The film soundtrack is written by Zimmer.

The film director pays a lot of attention to the love and family problems. Some characters said what they think about it. However, what about the situation in reality? For instance, Murphy didn’t meet often with her brother and his family. After knowing the fact that her nephew was very sick, she was going to bring him to the underground shelter, a place for the luckiest part of the population – doctors, scientists and other «elite». Her brother didn’t like the idea. So in order to divert the attention Murphy set the fire to her brother’s maize field (i.e. the only his resource of food). You can see no conflict resolution. This is the end of the story about the brother.

3) The decisions of the mankind destiny are the big secret. NASA said nothing to the people about other planets and possibilities to populate. This is explained by the fact that taxpayers are against «the expensive space investigations». However, to find a piece of meteorite and the new planets which are good enough for living are different things. Nobody knows about the discovery. The mystery is kept till that moment when «the technology will allow to save everyone» in order not to set panic among people.

ho is busy with the development of those new technologies? Are these science departments? Are these institutes? Are these the international group of scientists? No, they aren’t. The problem of the anti-gravity, which solution will allow saving the population of the Earth, is solved by one person in a big secret. Why don’t they tell everyone about their generous decision? This will attract more scientists who still know nothing about new ways to save the Earth. Unfortunately, they don’t think so. Kind of makes you wonder if the secret persons have financed the space research lived in the space bases with their families.

To conclude it’s good to say that «Interstellar» is the best film in technical, visual and sound terms, but with the demented sense covered by the black holes and hyperdrives drama.

They say that this film is about «space adventures». «Mass Effect 2» and «A Space Odyssey» are films about space adventures, but this one is about reducing of critical thinking and narrowing the moral people’s borders by the place and time shifting. This is a good background for everyone to accept his own passing away because of apocalypses while the group of businessmen will be running away with the food resources to the Saturn’s orbit or underground shelters. That kind of films suggests the audience to accept what it was.

After watching it’s better to read science fiction by Efremov. It’s a pity nobody turns it into the film.

There are some scenes with alcohol drinking by the protagonists. During one of the scenes, the main hero was holding the glass of whisky and discussing the planet saving with each other. He is the pilot, by the way.

There are some scenes with violence without detailed aggression and cruelty.

Instead of finding reasons what mankind did have poor planet and decided to change the attitude, the director suggests us to think that you can keep it up until the superhero will appear.

Export of the assessment
<a href="https://what-is-good.com/tv/films/interstellar-do-you-really-need-to-save-the-planet-when-you-can-find-the-new-one/"><img src="https://what-is-good.com/wp-content/uploads/2014/0/oc_r.png"/></a>
3+
Share:
Participation in the project
Tags:
Bad Bad films Fantasy
Also read:
The film «Brother Bajrangi»: When people unite to do good things, they can overcome anything
The F Word: Overton window in action
Film “The Neon Demon” (2016) Reveals The True Face of the Occult Elite
Film “Wonder Woman” (2017) - analysis without emotion