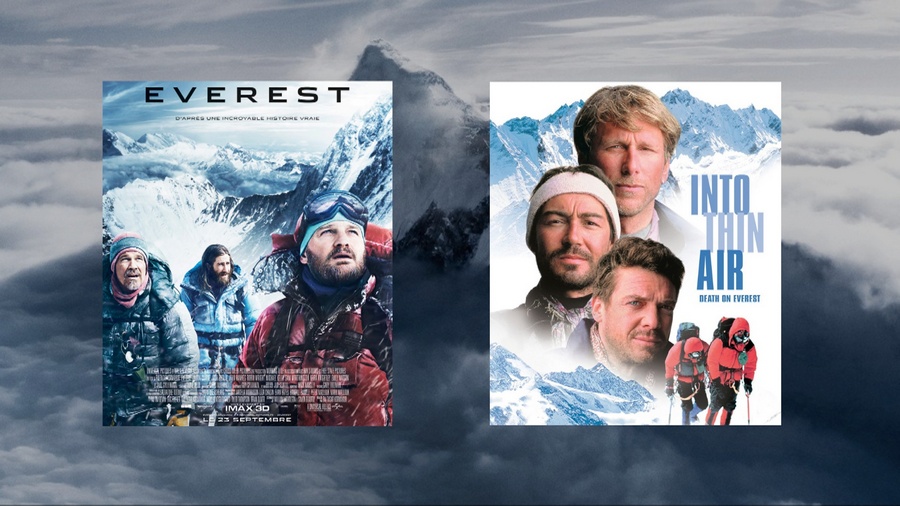 Approximate reading time: 21 min.
A link to the article will be sent to you on e-mail:

In this article the author observes an untypical for “What is Good” project genre of an adventure movie based on a true story on an example of two films: “Into Thin Air”, 1997 and “Everest”, 2015.

The movies describe one of the most dramatic climbs on the Mount Everest in May 1996, which ended up with decimation of alpinists on the decline of Chomolungma; over the entire season 15 people died trying to reach the summit, making it one the deadliest years on the Mount Everest.

Heads of two expeditions, experienced climbers and guides Rob Hall (“Adventure Consultants”) and Scott Fischer (“Mountain Madness”) decided to get together during the climb on the Mount Everest, however had made numerous of mistakes. Clients reached the summit of the mountain with a great delay, and during the descent they ran out of oxygen as the severe storm approached. It lasted for two days, during which died the heads of both expeditions Rob Hall and Scott Fischer, guide Andy Harris, and also two clients of the “Adventure Consultants”. One of the clients of the “Adventure Consultants” Beck Weathers had been left on the Mount Everest twice, since his companions considered him frozen up to death, but he had a miraculous escape and further came through several amputations.

The disaster was caused by an unsatisfactory preparation of the two expeditions, lack of experience of some members of the expeditions, a row of tactical mistakes, made by the heads, a bottleneck at the Balcony and Hillary Step during the climb and bad weather conditions. Not everybody carefully followed the “acclimatization schedule”. It emerged later that Scott Fischer (the head of the “Mountain Madness”, assumingly died of brain edema) took 125 mg of Diamox (azetazolamine) daily to quicken acclimatization.

The disaster had been caused by an unsatisfactory preparation of the two expeditions, lack of experience of some members of the expeditions, a row of tactical mistakes, made by the heads, a bottleneck at the Balcony and Hillary Step during the climb and bad weather conditions. Not everybody carefully followed the “acclimatization schedule”. It emerged later that Scott Fischer (the head of the “Mountain Madness”, assumingly died of brain edema) took 125 mg of Diamox (azetazolamine) daily to quicken acclimatization. 9th May Chen Yu-Nan from the Taiwanese National Expedition died after a fall down the Lhotse Face because he did not put crampons on his boots. During the “Mountain Madness” expedition preparation there had been bought too little amount of oxygen dispensing equipment. One may consider as another omission the fact, that Scott Fisher bought for the expedition old-fashioned ten-channel radio sets. Moreover, during the final summit climb guides did not have radio sets, as a result they could not connect neither with one of the camps, nor with standing behind Fisher.

The 1996 disaster gained wide publicity and raised questions about the commercialization of Everest.

First commercial expeditions on Everest had started to be organized in the beginning of the 1990-es. Guides-porters appeared. Their service package consisted of: delivery members of expeditions to the Base camp (on the south side of Everest 5364 m), organization of the route and  intermediate camps, accompaniment of a client and his/her backup on the whole way up and down. At that, no one guaranteed summit ascent (8848 m). In chase of profit some guides took clients, which were unable to vault to the top at all. 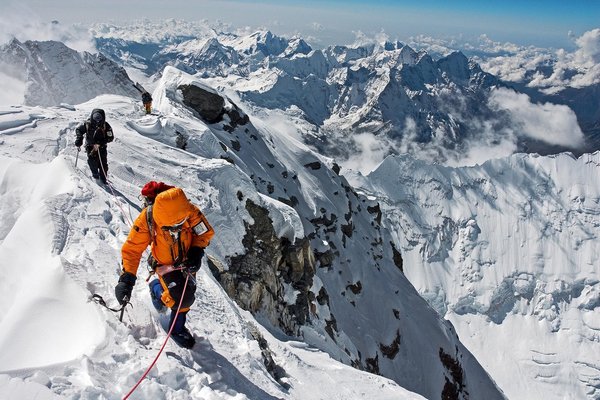 Famous New Zealand mountaineer Edmund Hillary, who together with Nepalese Sherpa mountaineer Tenzing Norgay became the first climber confirmed to have reached the summit of Mount Everest (29th May 1953), had an extremely negative opinion towards commercial expeditions. According to him, Everest’s commercialization “offended mountains’ dignity”.

Documental films devoted to the tragedy 1996:

“Into the Death Zone”, 2012 — an American documentary from the cycle “Seconds From Disaster” (6 season, 5 episode).

Feature films devoted to the tragedy 1996:

At the root of both films lies a real story, happened in the Himalayas in May 1996. Back then two at a time commercial expeditions, which consisted of both experienced alpinists and tourists, who had no experience of conquering eight thousander peaks, had been making a climb on the highest mountain in the world. However, during the descent several clients found themselves in a severe storm, in which 5 people died.

Within a framework of “What is Good” project the author does not make her goal to analyze the quality of shooting, cast, special effects, but to analyze fundamental meaningful differences of these two feature films (see the table below):

Therefore, having analyzed these two pictures, based on real life events, at that radically different from each other in questions of objectiveness and propaganda, the author prefers the film “Everest” 2015. The majority tends to consider old films more qualitative (and normally this is fare in sight of ever-greater inclination of modern cinematograph in strictly entertaining triviality), however, as for the analyzed above two pictures, we see an exception from this rule. The author calls to analyze such, let’s say near documentaries, and not to be tricked by propagandists, or to watch documentary pictures, which frequently closer to the truth.

Some facts and Mount Everest statistics

Mount Everest, being the highest mountain on Earth, attracts great attention of climbers; the summit is being approached regularly. The ascent of the top lasts for about 2 months – with acclimatization and camps arrangement. Counties, on which territory with summit approaches are located (Nepal, China), take big money for the summit ascent (the permit to enter the Everest area from the south via Nepal costs US$10,000 to US$25,000 per person, depending on the size of the team). Also one has to pay for the opportunity for the ascent. The priority for expeditions’ ascent is being settled.

A large part of ascensions is being organized by specialized companies and takes place as a part of commercial groups. These firms’ clients pay guides for their services: to conduct the necessary training, to provide equipment, and, as far as practicable, to ensure safety on the whole root. The cost of such a guide service may range from US$40,000–85,000 per person.

Everest climbing with the goal of reaching the highest summit of the mountain is characterized with extraordinary difficulty and sometimes ends up with deaths as mountain climbers, so Sherpas-porters, escorting them. The noted difficulty is a subject to especially unfavorable weather conditions of culminant zone due to the great altitude of its location. Among unfavorable for human’s organism climatic factors are: high rarefaction of the atmosphere, and, as result, an extremely low oxygen concentration in it, borderline to the deathful low value; low temperatures till minus 50-60 degrees, which in combination with periodical fast and freezing winds subjectively feels by a human’s organism like minus 100-120 degrees, and is able extremely quickly to lead to the temperature injury; last but not least, an intensive solar radiation on such altitudes. The mentioned peculiarities are being complemented with the “standard” dangers of alpinism, inherent to much less high summits: avalanching, stepping from steep embankments, falling down in chimbleys. 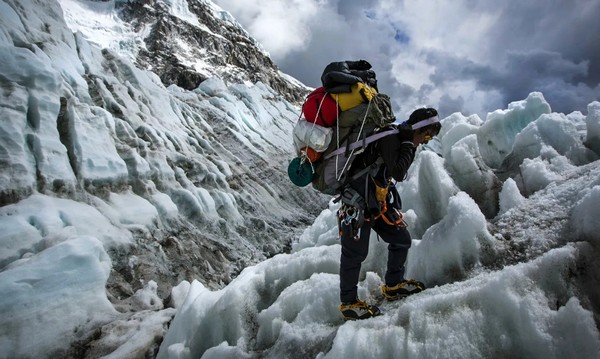 From the moment of the first summit ascent (1953) till 2015 on the mountain’s flanks died more than 260 people. Even the most expensive and modern equipment does not guarantee a successful assentation on Chomolungma. Nevertheless, every year about 500 people are trying to conquer Everest. As of December 2016, 7646 alpinists were able to reach the summit, 3177 out of them summited Everest more than one time.

The author considers necessary to mention a high extent of involvement of the local citizens – Sherpas – in organization of absolutely all expeditions.  Namely they are busy with organization of the base camp, delivery of all the necessary (water, oxygen, supplies, equipment), drawing ropes and ladders. At bottom, without Sherpas’ support, alpinists never could have reached the highest pike of Chomolungma. They are nameless heroes, doing their job for peanuts in comparison to companies-organizations’ profits. It is no secret that namely Sherpas die in The Himalayas the most.

On 18 April 2014, in one of the worst disasters to ever hit the Everest climbing community up to that time, 16 Sherpas died in Nepal due to the avalanche that swept them off Mount Everest. In response to the tragedy numerous Sherpa climbing guides walked off the job and most climbing companies pulled out in respect for the Sherpa people mourning the loss. Some still wanted to climb but there was really too much controversy to continue that year. One of the issues that triggered the work action by Sherpas was unreasonable client demands during climbs.