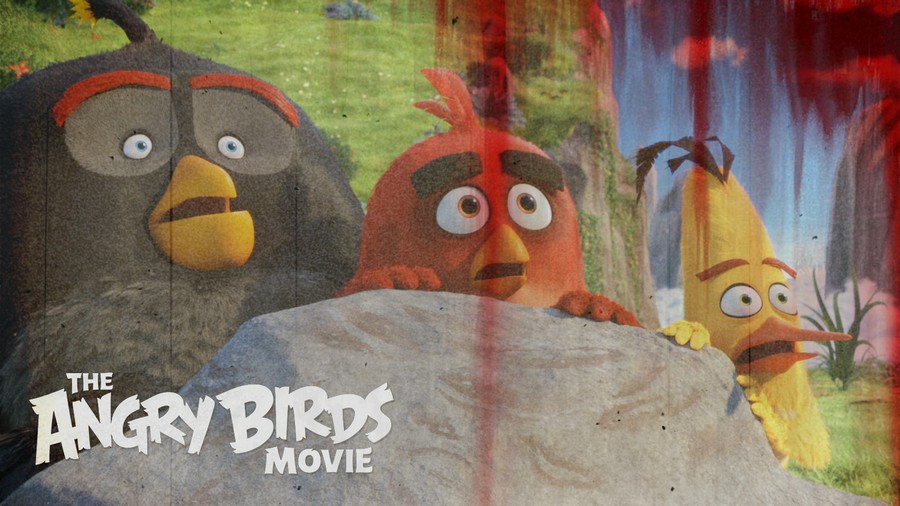 Approximate reading time: 17 min.
A link to the article will be sent to you on e-mail:
Review of the Angry Birds Movie (2016) of the project What is good.

Making the translation of the article about the cartoon “Angry Birds” for the project “What is Good”, I had to revise this “creation” in English (in the original). And a lot of interesting things “surfaced” in the process of viewing. For example, from 13:50 to 13:54 Red (a red bird) examines the sculptures of birds with appropriate replicas: two birds – art, two birds and a child – garbage, a group of birds “beating in ecstasy” – exotic. Moreover, the consciousness does not notice this, the pictures change very quickly. But the subconscious …

Further, Matilda (white bird), who helps other birds with various kinds of psychosis to recover, is also a “headache problem”. Look at her images and examples of behavior in the cartoon: “the image of the teacher”, “bridesmaid”, “attitude to a man”, “reaction to the explosion”.

In the cartoon in the form of a joke, the brands “Adidas”, “Calvin Klein”, “Instagram”, “Twitter” are widely advertised.

Separately, I would like to dwell on a character named Chuck (yellow bird). Throughout the cartoon he behaves very inadequately! Through his image goes on stupidity, homosexuality, gluttony, smoking, cretinism. Here are just a few frames from his life:

His doll Billy (male name) inspires Chuck to write poetry “I made you out of love.” Chuck just “killed” because of the death of his friend (his relationship to the doll is difficult to call “friendly”). Then we see the scene of grief, and behind it – the scene of complete indifference and the trampling of the body of the deceased Billy, with the comments of Red – “Very moving”. And “die”, in the understanding of heroes, means to move to a new level of existence (“to a higher plane of existence”). So unobtrusively to us is shown an attitude to death and the deceased, as well as “reverence” of the memory of the dead.

In this place it is worthwhile to think about who and why criticizes our “Immortal Regiment”, “Victory Day” and other holidays. Perhaps these people are fans of the “art” described in the article.

It is enough to look at only a few frames of “Angry Birds” to be convinced of the extensive promotion of the themes of vulgarity and perversions. So, for example, Matilda asks: “Have you done this before?”, Red replied: “Uh, yes, I have, but usually not for free”. An ambiguity of these phrases sends the viewer to the subject of male prostitution.

As I described above, the yellow bird Chuck actively participates in the promotion of deviant patterns of behavior: he puts on a female wig, spits into a friend Bomba’s (a big black bird) mouth under the classic music “duet of flowers” from the opera “Lakme”.

Also, Chuck asks the eagle an autograph on his chest and already cries for happiness! And Bomba calls the eagle – “a great guy“, note that this happens after he and Chuck drank eagle’s urine, and the eagle cursed with the son-of-a-bitch mat.

The scene with the urination of the eagle lasts 45 seconds. 45 seconds, Carl! I think, by this, the authors wanted to emphasize the importance of the moment. Also in the frame constantly (unfortunately, did not find how often) flashes someone’s ass. The frames below show us the “flight of thought” of the authors: “the fifth point of the eagle”, “cowards on the head”, “chest of an elderly bird”, and also “beak in someone else’s anus”.

In the cartoon, for some reason, a clinic of infertility treatment (Fertility Clinic) is demonstrated, pigs are even photographed against its background. A cheerful guy-pig with a pink inscription on the belly a “Farting Face“. Two cute pigs say: “Redrum”, that having read the opposite – “Murder” means murder, kill. “Red rum” is a red rum. What children need it for???

The bomb (black bird) aims at its friends. The world map – is on fire. On the right is another joyful reaction to the explosion. What do the young cartoon filmmakers promote and why??? Note that now terrorist bombings are occurring all over the world. And should we react with laughter and joy, like the heroes of this cartoon?

There are a lot of questions. Green snot. The image of a mother burping food for her children. A funnily exploding bird (remember shahids’ belt). A cult of food. Eggs with green bacon – cannibalism (?).

Pig wants to lay eggs, so that they can eat later – is it not the propagation of cannibalism by accident? Before you drink alkokiyad, swine says: “Enchanté!” – Charming! (What exactly fascinates him – booze-and-devour?). The egg is a symbol of the future offspring of birds. The pig pours it with wine – killing the offspring with alcohol.

Propaganda of abortions: we eat eggs (posterity) under a song about love to a child (They Long to Be) Close to You.

There are still a lot of strange and incomprehensible things, which there is neither desire nor time to understand. So, for example, failure of lessons at Matilda (class dismissed!), Sneezing with green snot, a theme of a lesson “paint you pain“. Sounds such a concept as “catharsis“. In addition to the “fifth points” pigs promote cretinism (dumped tongues and ocular hypertelorism are the two main signs of cretinism). Children repeat this, but do you know that everything is connected in our body? If you force yourself to smile, you will become more cheerful. And if you behave like a moron, then do not be a moron for long!

Adding here a contemptuous attitude to each other, ignoring each other, not listening, vanity, gluttony, vulgarity, stupidity, suicide, smoking, alcoholism, gambling … Pigs are asexual beings (lack of clear signs of difference between men and women: external or behavioral). Here is a short list of what the cartoons such as “Angry Birds” teach.

Debility cartoons are made not by morons, but in order to contribute to the degradation of society. The most interesting is that even adults in Canada perceive this “humor” as cheerful and acceptable for children. After several frames of this “masterpiece”, everything became clear to me, while my acquaintance, indulging the children, wanted to see through. It’s good that I did not agree. Having reconsidered this creation without children, I was only convinced that I was right.Be vigilant and study food for the mind before giving it to your children.

Children – are our future. And what future do you want? Do you have time to filter information?

Many parents consciously and responsibly educate their children, and do not trust “unfamiliar grandmothers” to tell their children fairy tales for the night.

I would like to dwell on the “langnew” – a new language introduced into the fragile infant consciousness.

The bird asks: “Want to go get a bite?” That when replacing the word “bite” with “drink” – it acquires a new meaning – “Do you want a drink?” The circumstances of the issue correspond to the life circumstances of alcohol consumption. Consuming food in a stressful situation is also not uncommon today.

There is a scene, in which Red is told: “Red, do not be a hero” – which means “do not show heroism”, so young spectators are taught that being a hero – is bad!

When the cauldron with the boiling water is turned over, the pigs shouted: “Every pig for themselves!” – which means “Everyone for himself!”

When the pigs are going to eat eggs, and Red is rushing in, they meet him with the phrase – “This is a civilized buffet.” (What kind of model of civilization are we being imposed?)

In the end, the children sing a laudatory song for Red with the words:

In the song all three qualities are equally praised. What is it? Evil Benefactor or Blessed Anger?

After imitating the cry of the eagle on 44-45 minutes, all this madhouse is equated to a kindergarten (that is, such ugly behavior in kindergarten is a norm for children ???).

It is worth paying attention to the phrases used in the original:

So the word “Heck” – “What a heck?” (According to some sources the word “Heck” is the result of the merger of the two words “Hell” and “Fuck” – male sexual organ (to copulate).

Son of a … – the phrase is not over, but the full phrase is translated as “son of a bitch” It is used by an eagle, after hitting its head against a stone. In continuation of the phrase, Bomb says: “This guy is good” – “He’s a great guy” (a few minutes before this “great guy” pissed into the lake from which Bomb was drinking).

In one of the episodes the pig says “Will bag 4 eggs” – “I’ll give for the eggs”, “I’ll give myself in exchange for eggs”.

In one episode, the pig is washed with a Red toothbrush, and Red turning to the pig says “Get it out!“. I wonder where it should be pulled out from?

The adression “Hey, peckerhead!” (One who has a penis for brains, and no social skills). What in slang means – instead of a head – a member.

The phrase “birdie bath” (it is a quick washing of the genitals). What in slang means – to wash “your chick”, your genitals.

King Mudbeard – King Dirty Beard (an unpleasant sight, if you look on the Internet for the slang meaning of this term “mud beard”, you will learn a lot of unpleasant things).

A little about poetry. In the cartoon they talk about the “sublime” only again in a negative light, poems about Judas “Or if my name were Judas Would you ask me what my mood is?”. Relation to poetry – “In vain time spent” (Oh, this is a huge waste of my time).

26:50 The destruction of the house of Red – an attitude to someone else’s work 28:34 Do not worry, he’s had all his shots. (“Do not worry, it’s vaccinated” propaganda of vaccinations) 30:00 Explosion and a positive reaction to it (when the whole world is fighting terrorism) 33:19 Promoting smoking 35:10 Propaganda of perversions 37.:39 Birds and Bees Fertility Clinic (why there is an infertility treatment clinic in a children’s cartoon?) 37:43 Slap on a soft place – promotion of deviant behavior 38:03 A pig pulls off his panties and throws to a bird’s head 39:44 Pig is poisoned with alcohol alone – alcohol advocacy 39:50 Murder of an offspring with alcohol 41:41 The yellow bird continues to behave inadequately 42:57 Again the fifth point on the screen, Peek-a-boo! (“Peek-a-boo!” for small children!) 43:06 Promoting smoking 45:29 Black poultry’s suicide attempt 53:15 Propaganda of homosexuality

54:25 The bird flashes in the frame and her breast appears

57:42 Attitude towards food – cult and cramming

The results are sad and joyful at the same time. Sad – because this product is being introduced into the heads of people, especially children. Here, in Canada, you can already see the results of the destructive activities of such propaganda. It is not yet universal, but there are already a lot of people around who think that smoking grass is fun, giving a three-year-old child a taste of dad’s beer – normally, tattoos and piercings in all places are beautiful …

What is so joyful, you may ask. That not everyone wants to be a “herd”. That we start to understand, and not just “look in the mouth” of Uncle Sam. The country is being reborn and the Reborn begins within each of us. After all, it depends on us whether it will be clean on our streets, in our heads and in our souls.

2+
Share:
Participation in the project
Tags:
Bad cartoons Technologies
Also read:
Goals and Objectives of society infantilization
The cartoon "The Boss Baby" (2017): Ideology of child free for the littlest
Morality curve of modern youth
What is the purpose of the superhero cult being imposed on people's minds?