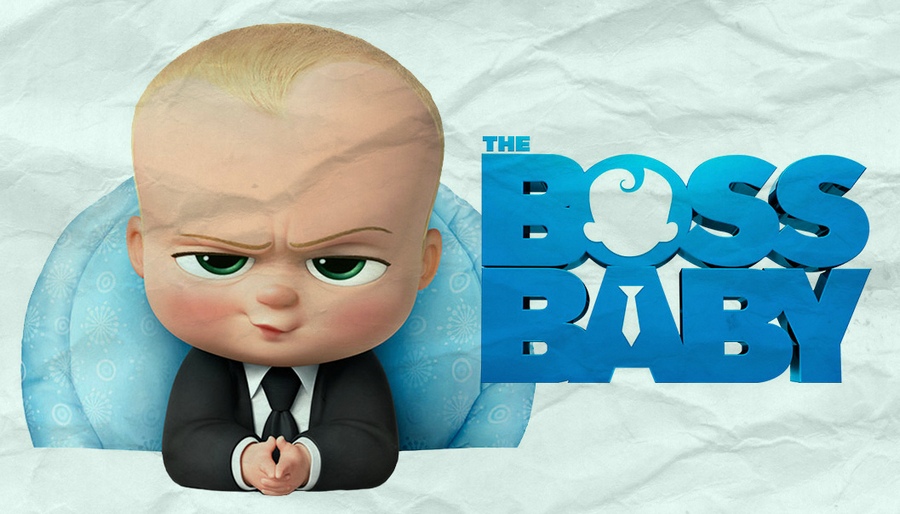 The cartoon “The Boss Baby” entered into a wide release in March 2017 and appeared to be one of the most profitable and popular pictures lately. The world box office results are about half a billion US dollars.

Obviously, the most part of it – are children, whose parents took them to a new advertised cartoon. And what millions of children have seen for an hour a half of the cartoon?

Tim – a seven years old egoistic boy with a very good imagination. Parents love him to bits; Tim simply is rolling in their endless love, care, attention and indulgence of all his whims. But the idyll destroys, when a younger brother appears in the house.

Tim half serious, half playful sees, that his “brother” (nameless throughout the whole cartoon) is different from the rest of the babies. Once he learns that his younger brother – is a corporate “Baby Corp” agent, who arrived to Tim’s family with a certain mission. Since people started to love dogs more than children, the Boss Baby is in charge to prevent entering a new pathetic breed, and Tim agrees to help him in exchange to the promise of the Boss Baby to disappear from the family, after his mission is done.

If this plot does not provoke rejection in you, then it is worth to analyze it in detail: 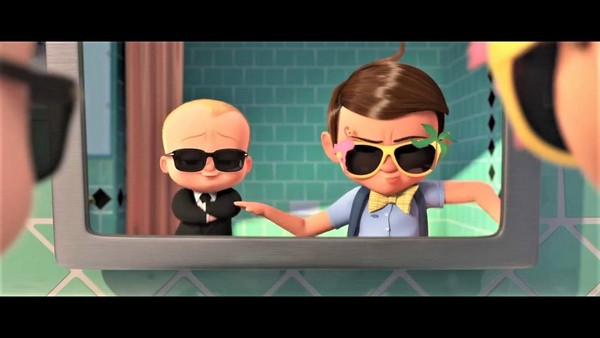 Superficially-kind and instructive central theme of the cartoon is devoted to the bromance – to the fact how a seven-year-old boy gets used to his brother and in the final asks him to stay in the family. It is unclear with the plot, is the story with the “Baby Corp” an attempt of a child with advanced imagination to hide from the reality, or this is all an invented “fairy-tail” for the appeared in the final daughter of a grown-up Tim, but the rest is clear – Tim from a pampered egoist becomes a loving big brother.

This is especially noticeable from the circuitous scene in the beginning and in the end of the cartoon, where, at first, Tim is boasting that he is a single child in a family and draws his family in a triangle, and in the final already draws it in a heart. In general the development of Tim’s hero along this plot line goes successfully: he really cares about sinking into dotage Boss Baby and sincerely loves him, even when he grows up into a provident and cynic businessman. However, this nice plot is superficial and, at bottom, the main idea of the cartoon is straight the opposite.

Both main plot lines – the relationships of Tim and the Boss Baby and the secret mission of the Boss Baby – are based on an idea that love is ending. In the first part of the cartoon the Baby Boss demonstrably shows Tim, that because of the appearance of the younger brother from now on there will be a lack of love for Tim from his parents.

A happy family according to Tim before the Boss Baby appearance.

Further the audience often hears as from Tim, so from the main villain Francis the same thought – “he has stolen the parents’ love from you”, “you have no love left”, and “you have been stolen love”. In this plot line love has a material analogous – beads that the Boss Baby takes to himself.

The Boss Baby: Much time, a lot of attention and all parents’ love go on me.

The Boss Baby: You obviously do not know beans in business – all calculations are against you. The parents’ love won’t be enough for both of us, since the beads aren’t so many.

The second plot line – the mission of the Boss Baby against Francis – is based on the same idea: the Boss Baby shows Tim a “diagram of love”, which both of them compare to a pie, i.e. again make out of love something material, which one needs to divide and can end. On the diagram, where it is shown, whom the humanity loves most, it is seen that in the last years dogs are being loved more than children. So, first of all, love itself is compared to a pie, second of all, the biggest piece of it goes to animals.

The Boss Baby: The point is that dogs bite still bigger piece of pie. They still love from us!

Tim: Yes! Just live you stole from me.

Love in general is presented entirely material: Tim’s parents tell him fairy tales before going to be, sing songs, and play with him. Broadly speaking, according to the plot “love” – is a constant indulgence of whims and wishes of the loved creature. At that in the cartoon there are no scenes, where Tim would say that he loves his parents, and his grief from the worsened relationships with parents is solely in the fact, that he doesn’t have former attention. How normal it is to demonstrate to children such scenarios of relationships with parents?

And how “The Boss Baby” authors comment on the fact that children started to lack love? It is explained that dogs lately have become very cute and because of that reason have become more important, than children. The outcome, which a child makes from the viewing of the cartoon, is that children are being born because of their adorableness, and if children are not attractive enough for some reason, or there is somebody more adorable, than them, the humanity will switch to this “somebody”. Moreover, the authors of the picture make the situation that absurd, that the humanity will probably soon stop delivering children only because there is a replacement for them. Properly, the mission of the Boss Baby is in preventing the issue of a new dogs’ breed – always tiny, cute, not demanding care and immortal.

The corresponding comparison one can see in the cadres of the cartoon.

A distortion of true family values and such primitivism of family relationships, in which children are presented solely like an “instrument of adorableness”, might and looks at the first glance funny, but, buy its effect of young viewers is extremely harmful informational influence, which if imbeds in mind, will further fall short.

At bottom, children are being suggested several thoughts through this cartoon:

Apart from the presented crazy ideas, in the basement of the cartoon there is a promotion of a child free ideology. Throughout the whole story children either behave as adults, or cry, or demonstrate its narrow-mindness and dumbness. From the team of the Boss Baby, consisting of five smart babies, only one girl, really looking like a child, may cause a little emotion, the rest look and behave themselves not like normal children, but “retards”.

The Boss Baby itself – is such an “office person”, who is crazy about his job: rough, uncompromising, if he ever switches to the “baby regime”, this means, he is in danger and urgently needs to come back to his normal condition. This is how he talks about it himself:

If he can cause sympathy by his charisma, then not as a child.

Besides, in the cartoon the attention is accented on so-called “fear of an everyday life with a baby” – lack of parents’ sleep, spitting with food etc. Communication of parents and the Boss Baby is shown as a service of an adult to a moody and angry child, demanding a total obeyance. Without tender feelings, joy and happiness – just a hard work on a moody and unkind “boss”.

There are five forms of humor in the cartoon:

1. An accent on a sit-upon. The buttocks of the Boss Baby for the first thirty seconds of the cartoon appear on the screen seven times: now the Boss Baby twists them in front of the screen, then visually burbs, now escapes from the automat in order it won’t foist a dummy into his sit-upon, then a dog is trying to smell him etc. 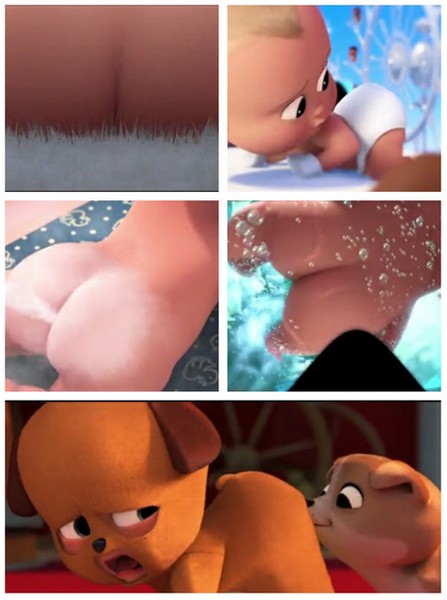 2. Humor not for children – different vulgar, ambiguous jokes, like the scene, in which Tim outrages by the fact, that his mother washes the Boss Baby together with her, and cries: “He is naked!”, – and then grasps his pope and continues: “And I’m naked!”.

3. Part of the jokes in the cartoon is connected to careerism and cult of money, however, it does not have a good laugh, but a sense of grandeur – an “ode to a report” or an “office style” is encouraged. Even the announcement in the plane contains the following words: “Ladies and Gentlemen, and passengers of the economy-class”. The Boss Baby himself always spends like a drunken sailor, thereby driving bystanders mad.

In the final the adult Boss Baby goes to Tim’s daughter and they have the following conversation:

– Here! (does not give, but throws the money next to the child) Get yourself a horse.

4. Jokes connected to violence – regularly somebody beats someone, at that adults beat children, and vice versa. Causing pain to a person is followed by humor, and not by demonstration of empathy and mutual help.

5. And a hill of beans of a kind laugh, mainly based on references to famous movies and popular music, and hardly understood by children.

Many vulgar jokes not for children’s audience. A constant accent on rumps of the main heroes.

Presented in the function of “humor”.

The cartoon distorts a family image and forms a false perception of family relationships. Multifaceted and delicate process of bringing up and growing up children is brought down to a primitive circle of actions of changing nappies and drying snots, and its goal is announced as only getting pleasure from children, as from the “instrument of tenderness”. There is nothing said about continuing a family, responsibility, that children – are the future of the nation, and about the rest important questions. All these messing around may seem funny to adults, but only in case they don’t think of which images and modes of behavior their child will learn from such cartoons.