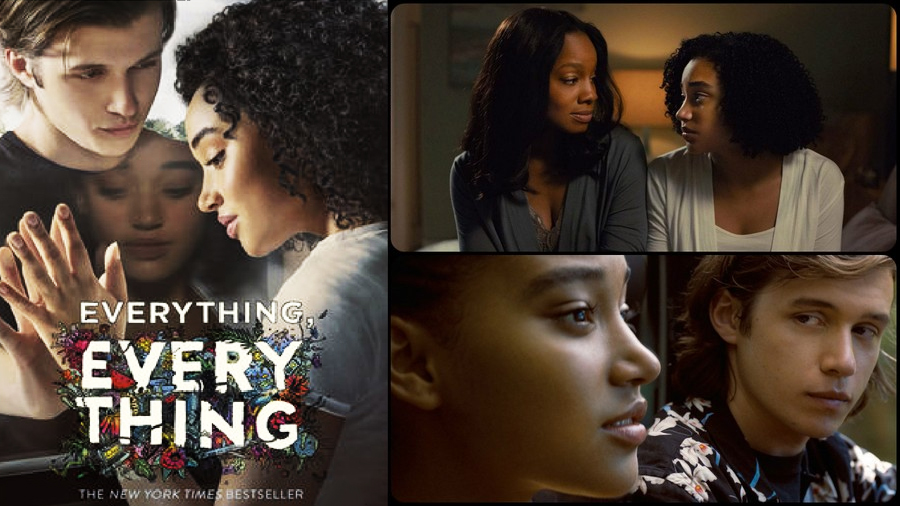 Review of the film Everything, everything (2017) of the project What is good.

The movie “Everything, everything” has been released 19 of May 2017 and is the screen adaptation of a cognominal adolescent novel. The picture is being positioned as kind and reassuring story, praising the beauty of the world. This is a fairy tale about love for teenagers. But if there is the smell of a fairy tale, that only of the poisoned one, the Disney one, where again and again the same subject is being promoted to minds of children and teens – the discredit of parenting.

The main heroine Maddy is eighteen years old, and all her conscious life she have been spending isolated from the outer world. Maddy lives in a sterile house, in sterile clothes, in a sterile microworld. She is communicating only with her mother and a nurse, and all her life: studies, hobbies, meetings – happen in a virtual world.

It is all the fault of a rare disease of a strong immunodeficiency: to go on the street is deadly for the girl. So she went on living this way until a new neighbor Olly had appeared, her future “prince charming”, who motivated Maddy for the “deed” – to run away from the house in order to make her dream come true and to see the sea, even if this risk could be the last she had done in her life.

There are only two subjects in the film, one of which is on the surface – the outer meaning, and the second one goes by the background – the inner message. Also a separate attention deserves the behavior of the main characters.

The outer meaning of the film is in praising the world, praising the beauty of life, love, which is being translated by the beautiful shots of nature, sea, underwater fish, and on the other side – sterile and colorless world of Maddy. The viewer as if is being given the choice – “what is better: a bright moment or boring infinity”? And through the heroine the viewer is being led to the choice towards the side of the “bright moment”, i.e. it is better to live one, but beautiful day, than to live long and boring. In reality this so-called “positive” meaning is quite arguable and depends on what a personality’s whole existence is. 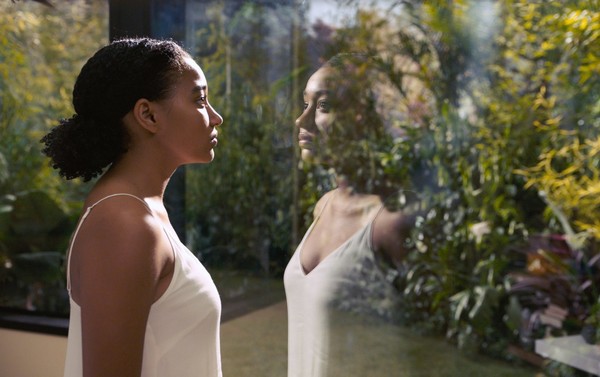 If a person values only entertainments in life – then, yes, but if a person, a personality has a goal, has a wish to make this world better, to develop and to contribute in a society’s and a humanity’s development, then to risk for the sake of a fleeting pleasure is stupid, ineffective and pointless.

Again in heads of young viewers (mostly girls, since they are – the main target audience of the movie) is being implemented the idea – live fast, die young.

The main secret of the film appeared to be, that Mandy is not sick. It becomes known, that all expensive and sophisticated in exploitation house has been built for the sake of lie of Mandy’s mother. She made this to keep the beloved daughter close.

All this line is ingrained in the plot in order to show such insane variant of hyperprotection, when a mother won’t let the already grown up daughter go, and the microworld of Maddy is an allegory of a “glass bulb”, in which parents put grown up children, not giving independence to them.

The plot line copies the Disney cartoon “Tangled” – a girl, closed from the society by her mother, who convinces her, that the world is very dangerous + an appearance of a man + an escape with him from the mother = the truth that the world is absolutely safe and welcoming, and the mother has been lying. 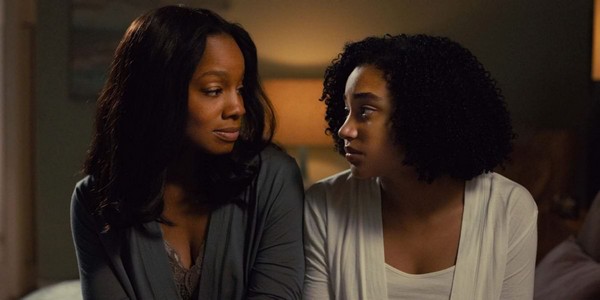 This line is presented in the film absolutely absurd. According to the plot, the mother spent immense amount of money (sterilization of facilities, e-education, e-work in architecture, bribery of a nurse), labor, time (herself has constantly been gone through the procedure of disinfection), has deprived herself from the opportunity to invite somebody in the house, and all these only for the sake of closing the daughter within four walls? An attempt to justify this act is allegedly fear, that Mandy some time ago had an allergy, and the doctor decided not to treat the child, but simply to destroy her immune system, to lie and to shut – looks just funny.

Yes, the hyperprotection, sadly, is a real problem of many modern families, but one needs to talk about it not with children, but with their parents. The movie is aimed at teen-girls, but not at their parents, and gives young viewers an option to solve the problem of the hyperprotection (one needs to count that among teenagers even minimal sensible restrictions may be perceived as an “excessive control”) – an escape with an unknown guy at that at with the risk of one’s own life. In the film this impulsive decision leads to a positive effect: Maddy makes her dream come true, learns the truth, finds love, spends many happy hours and is out of bonds of her mother’s love.

Again, one may talk about the harmfulness of the hyperprotection by the language of art, including cinematograph – it is worth explaining to parents, than children are needed to be prepared for the independent life and let go, that the hyperprotection causes many harm to a child, but one needs to talk with parents about it. “Everything, everything” is not communicating with parents, but promotes to heads of young viewers the idea of bad parenting, giving such piece of advice: if your mother forbids something to you, worries about you, restricts communication with dangerous companies – you need to ignore her opinion and urgently run away from her, leave her. At that in all the rest the relationships of Maddy with her mother seem very good.

Absolutely analogues meaning hidden promotes to children the cartoon “Tangled”, but there was at least a step-mother, with whom the main heroine had strained relationships, which partly washed out this message.

For a complete set, besides the image of an insane mother, in the movie there is an image of Olly’s father – an alcoholic, who beats up his son.

It is worth mentioning, that all heroes act themselves absolutely egoistic:

Olly hangs up on Maddy’s windows the photos of a sea and the phrase: “Every ocean deserves to be seen by you” – a romantic act? Maybe, however, in the plot’s context this looks simply as “rubbing salt in a wound” of an unrealized dream, and mainly this motivates the girl on the insane act. 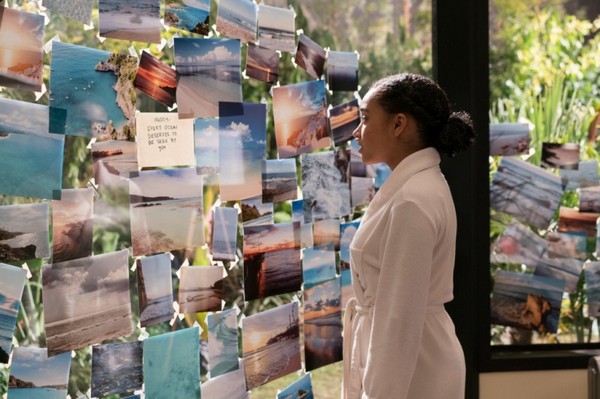 Maddy in another passionate outburst, still did not know about the lie with her disease, runs away from home and leaves the only one significant person, her mother. A girl lies to Olly, telling him, that she got cured; by doing so she makes the guy a subject to risk of somehow being responsible for her possible death. Taking into account in many ways inadequate and premature behavior of the girl, even this moment fosters in the audience not so much decisiveness, as blindness.

During their escape, albeit deceived by Maddy, Olly still acts quite stupid, letting the girl, who has been living all her life in sterile conditions “jump in feet first” and at once try all “life pleasures”. Young people, of course, did not hesitate to get into bed.

We have been talking about Maddy’s mother above. So – in front of us is the “romantic” and “kind” movie, where all the heroes act emotionally and impulsively, where nobody has heard of the word “responsibility” and puts in the first place her own interests. All these is being served under the standard romantic sauce “love justifies everything” (even the film’s motto is “Risk everything… for love”), which again talks about the professionalism of those, who create and pay for such plots, perfectly understanding, which destructive layings they implement in heads of viewers.

The film “Everything, everything”, aimed at teen-girls, behind a rather superficial, but bright plot, carries two harmful ideas: “live fast, die young” and “get rid from your parents’ protection”. At the same time the movie encourages emotional impulsiveness and blindness. The picture plays on simple and understandable emotions, is full of beautiful shots, bright and romantic moments, providing the sweet taste of a “poisoned candy”.

Export of the assessment
<a href="https://what-is-good.com/tv/films/the-film-everything-everything/"><img src="https://what-is-good.com/wp-content/uploads/2014/0/oc_r.png"/></a>
7+
Share:
Participation in the project
Tags:
Drama New films
Also read:
Features of perception drug propaganda by the «Savages» (2012) movie
Cartoon "Moana" (2016): Another poisoned fairy-tale from "Disney"
The film "Beauty and the Beast" (2017): Dangerous trends
The movie “The Holiday” (2006): How to spoil the good plot by destructive markers