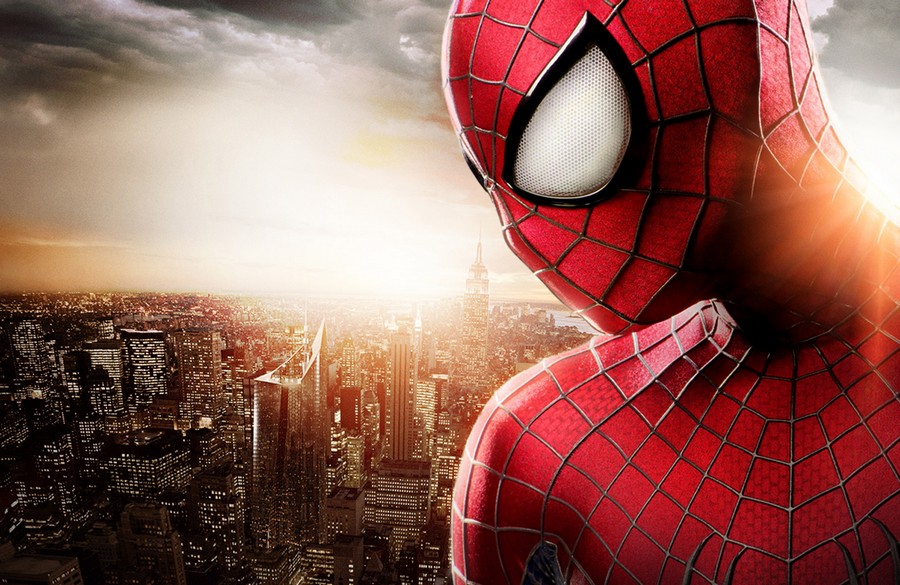 Review of the The Amazing Spider-Man movie (2012) of the project What is good.

A superheroes theme, which invaded a cinematography, brings more bad, than good from educational point of view. The main problem of such images is that by their example, young audience forms false impression, that if you want to become a hero, you just have to wait for some extraordinary event (such as spider`s bite, scientific experiment, natural anomaly – there are a lot of options), and you`ll get it all: super pothers, super girl, and super exciting life.

It means, that the majority of such plots disturb the main logic chain, in the basement of which lays the idea, that the hero should go through a long way, while shaping his character and developing unique abilities in some field. At the heart of screen adaptation of real people`s stories always lays the description of their life, and their heroic deed or outstanding achievement becomes the culmination of the plot. In the case of Marvel universe`s superheroes, all the plot is concentrated just on the endless victories, presented with many special effects, and transformation in a hero happens in a sort of spontaneous way. The difference between these approaches is massive: in the first case, the image of the hero motivates to work on yourself, in the second it motivates to sit and wait for an opportunity that will make you a superhero at once. Nevertheless, there are exceptions in any rule and New Spiderman`s dilogy is one of them. 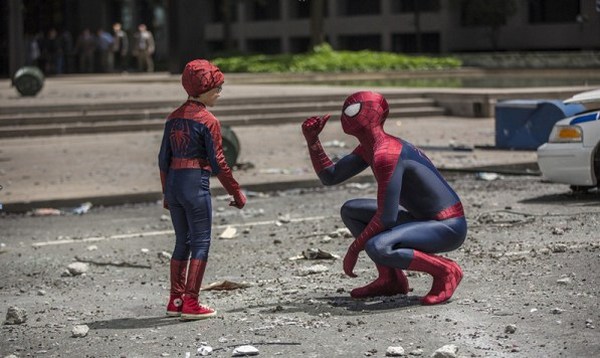 “Hey, Spider-man – I knew, you`d come back. – Yeah, thanks for stepping up for me. You`re the bravest kid, I`ve ever seen. Let`s agree: I`m gonna take care of this chap, and you`ll go and take care of your mom, ok?”.

The authors of “The Amazing Spider-Man” (2012) and its sequel “The Amazing Spider-Man 2: Rise of Electro” (2014) were able to preserve this feeble connection between real and fairytale worlds, and despite of imagery of fantasy transformation of human into superhero, the humanity still stays on the first place in picture, and life is shown with all its realities, experiences, and disappointments.

Despite traditional American patterns, main heroes of The Amazing Spider-Man are not at all spoiled students, which are obsessed with clothes, parties and entertainment. They study and they study well. They are both excellent students.

Gwen, while studying, trains at research Centre, helps her classmates to do homework, what allows one of football players to enter the university of his dream, and she, herself enters Harvard, thanks to her own knowledge. She is sociable, attractive, smart, humble, lives in full big family (mother, father, two brothers) and proves by her own example, that knowledge is light, and it`s prestigious to be clever. 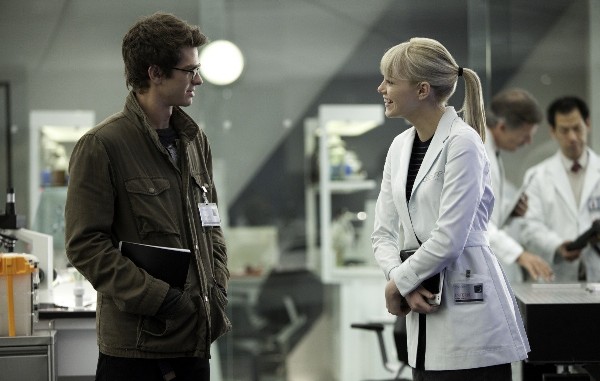 Peter is fond of photography, street sport, natural sciences. He has big abilities of a young scientist, being a son of inventors, who had discovered a molecular cell gene, which enables to cure complex diseases (and which has bestowed superpowers upon him). Parker is a little bit scattered and irresponsible at first, but he will change seriously by the end of the plot line.

In the whole, school environment reflects some life`s realities: there are both fights and standing up for weak, and also help for lagging students. All of this brings good example of collectivity education among youth.

Moreover, a typical for “superheroes” films individualism is absent here. It is replaced with mutual help, unity, mercy. Not only Peter saves citizens, but they also save him, because good is not forgotten, and it is difficult even for a hero to get along without help of others (such as help of crane operators, Gwen, Gwen`s father). “If you can help others with something, your moral duty is to do it. Do you understand what it means? It`s not a choice, it`s an obligation.” (Parker`s words from the first part).

An awareness of responsibility to others and feeling of social togetherness suggest thinking about:

The problem is that we all have a lot of things, if we can breathe, feel, see, hear, speak, walk, smile… And that`s why we mustn`t give up, we have to realize what is given to us, because it`s worth living. We don`t know exactly, why we have come into this world, but as we came, we should have the goodness to do everything and after look, what has come of it. 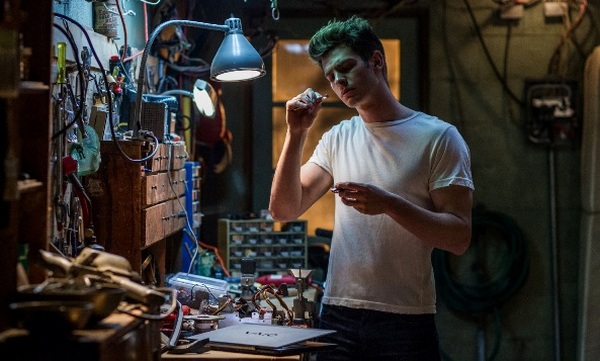 The main hero goes through difficult stage of growing up through loses and hardships, even his superpowers don`t save him from that. Not the easiest way for a person, but Peter copes very well. Now he has grown up completely, understanding the price of every moment of life, and he will continue to battle against injustice, not letting the loss of closest people to be in vain, because every one of us has to become as honest, decent, open-hearted and happy as him.

The authors were able to tell about everything – education, meaning of human`s life, about every single day, value of moments, eternal, faith, love, hope, using the example of this story and brought good message to the young generation. Next words (from Gwen`s speech at prom), definitely confirm that:

“We all think that we are immortal, we are supposed to feel that way. We are very young still, but like our years of high school, what makes life valuableis that it doesn’t last forever. What makes it precious is that it ends, I know that now more than ever, and I say it today of all days to remind us that time is luck. So don’t waste it living someone else’s life, make yours count for something. Fight for what matters to you, no matter what, cause even if we fall short, what better way is there to live?”

“It’s easy to feel hopeful on a beautiful day like today, but there will be dark days ahead of us too, and there will be days where you feel all alone, and that’s when hope is needed most, no matter how buried it gets, or how lost you feel, you must promise me, that you will hold on to hope. Keep it alive, we have to be greater than what we suffer. My wish for you, is to become hope, people need that, and even if we fail, what better way is there to live. As we look around here today, and all the people who helped make us who we are, I know it feels like we’re saying goodbye, but we will carry a piece of each other, into everything we do next, to remind us of who we are, and who we’re meant to be”.

Drugs and computer addiction are shown mostly in the negative context. Harry drinks, being hopeless, and turns into a monster (before using poisons he was quite cheerful, sociable person).
Max - is a gamer with an inferiority complex, dependent, living with his elderly mother; who receives worthy punishment in the end, but even he deserves encouraging words from Peter: “ I’m nobody…- Hey, you`re not nobody, you're somebody“, meaning turn off the computer guy, and take care of yourself finally!"

Is absent. All of the heroes have normal, traditional relationships.

There are enough scenes with fights and chases in the film, as in all stories about superheroes, but in the whole, film corresponds to the declared PG-13. The villains are shown as the villains, the good is shown as the good. Everything is in its place.

It is not easy to become a human being, but you have to overcome your materialistic desires, making choice in favor of development, to be able to reach the set goal – grow up as a personality. We all have enough time for that, it means, that one should not spend it on blank expectations or unpromising affairs, which don`t bring any good to anyone.

If you are educating your child, using films, which are based on the stories of real people, it means that even a positive image of a superhero is most likely of no use for him. But if the Marvel`s production is well- known for your kid (nowadays 90 % of kids relate just to such category), then watching New Spider`s man dilogy and speaking after on the themes of heroism in fantasy world and in reality is a good idea of spending free time together.

Export of the assessment
<a href="https://what-is-good.com/tv/films/the-amazing-spider-man/"><img src="https://what-is-good.com/wp-content/uploads/2014/0/oc_e.png"/></a>
4+
Share:
Participation in the project
Tags:
Good films
Also read:
«Fifty shades of gray» - a piece for grown fans of «Twilight»
The film "Gifted" (2017): Talent - a gift or a challenge?
Film “Paddington 2”: a good fairytale for children and a glossy cover of London
A program code of the movie “Men in black: International”