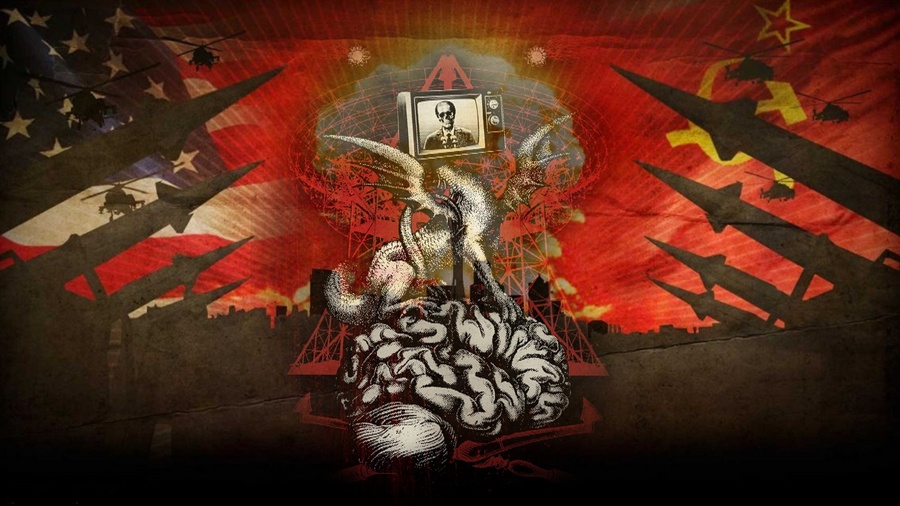 As you can guess from the title, the article will focus on Russian television. Now the vast majority of society is aware of the harmfulness of Russian TV channels, but few people understand how the system of control over them is technologically organized, and how it is possible to direct their work to achieve destructive goals. We will try to cover this point briefly, but holistically in the article.

We have to start with a sad fact: the Soviet Union has lost the Cold War and as a result, as any defeated country, it has lost the major part of its sovereignty including over the sphere of ideology and mass media.  Now we review this situation only on the example of television, the main informational mouthpiece.

In the USSR all TV channels belonged to the state and completely obeyed it. Thus, at least nominally, they had to work according to the interests of the country: to highlight the people’s achievements, contribute to the realization of cultural and educational policy, counteract foreign informational aggression, etc. A huge range of tasks and a vast amount of work were implemented. How well the Soviet TV coped with all this is an open question, but in general the information agenda was at least life-affirming, inspired the population to be confident about the future (times of Perestroika, of course, are not included here) and allowed to build a harmonious life.

With the coming of a new “Owner” the situation has absolutely changed and technically it was made in following way.  Those people have been put on key positions who nowadays are called “effective managers”, mostly people who have got additional education abroad (read “recruited” or “reprogrammed”) and even persons with double or triple citizenship. If you read biographies of Russian TV channels top managers and leading journalists, you find a common thing that unites them. The well known examples are such television hosts as Vladimir Pozner (U.S. and French citizen), Ivan Urgant (Israeli citizen), Alexander Gordon (U.S. citizen), etc.

On service of money and ratings

But television is a huge machine where tens of thousands of people work. It is impossible to find so many professional agents, and all staff members cannot be replaced with “their people”. Thus system mechanisms of major media goal-setting changing were implemented. This was done quite simply by putting TV channels on the rails of self-sufficiency (taking account of the fact what power television has it is equal to offering the army exist on self-sufficiency mode). Nowadays all Russian TV channels are financial organizations first of all, and their main task is to get profit. This task is registered as the main one in their statutes. 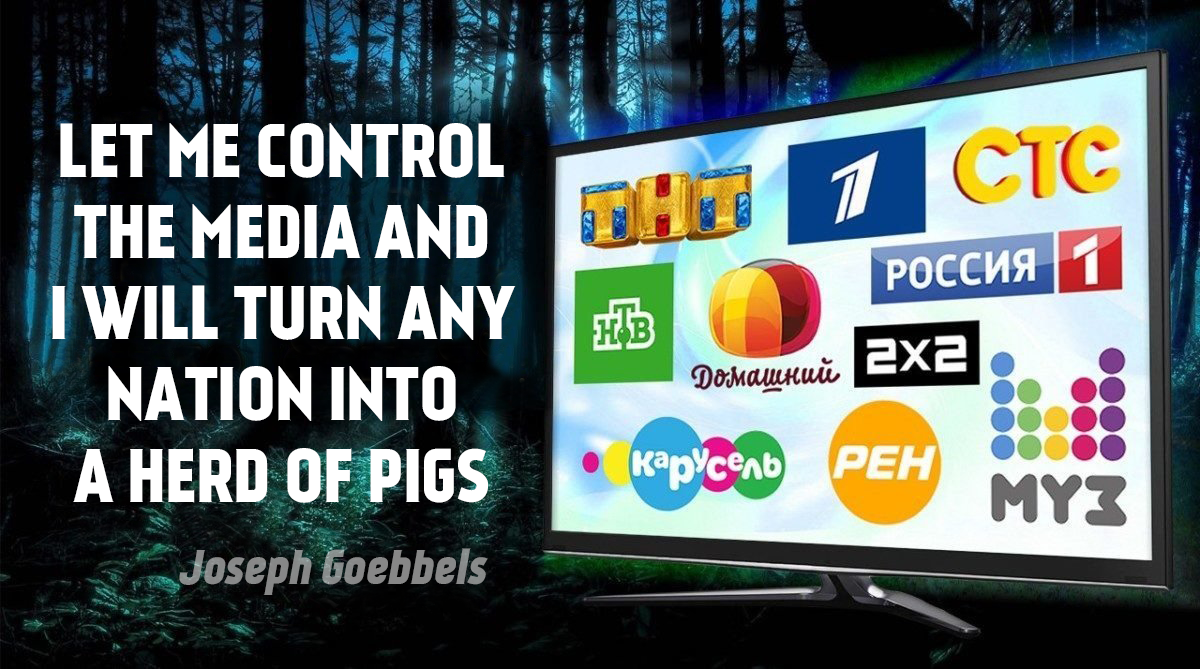 Bot it is not enough to reorient from state interest to financial ones. They still need to make sure that these financial interests are implemented in the way that a customer needs. And for this purpose external financing mechanisms were set up. TV channels earn mainly due to advertising. 90% of TV advertising in Russia is ordered by large business and MNCs, companies and brands that are somehow under the jurisdiction of the United States, Great Britain or are directly controlled by foreign financial elites. In other words, now the creation of Russian TV content is paid for by Russian overseas and European “partners”. Accordingly, if any TV channel begins to conduct an incorrect information policy, it automatically has problems with advertisers and revenue decreases. And try to maintain a state of hundreds of journalists without heavy financial injections.

Besides there is a mechanism of ratings that advertising price depends on.

Until 2016 the only structure forming ratings to all Russian TV content was TNS. It defined what was popular and what was not. Do you really think that Russians like Dom-2 (House-2) and that is the reason of its high ratings? Nonsense, it is just a very effective program in terms of decline in moral and intellectual level of local natives. That’s the reason why it has always had high viewing rates. Of course, after many years of such brainwashing a real fan club of this degradation product has formed.

Since 2016 function of TV ratings has been taken by VTsIOM (Russian Public Opinion Research Center), that, on the one hand, can be an indicator of Russian media sphere gradual separation from foreign influence; on the other hand, we can suggest that that during the last 30 years a sufficient quantity of local Gauleiters has been brought up and the need for such provocative mechanism of external control fell away. Anyway, over the past three years after VTsIOM coming in this sphere TV content in terms of values and ideology has not become less immoral.

It’s all about effectiveness

Let’s look at further work of the system. Due to the organized scheme “their people” from key positions have got a possibility to demand EFFECTIVENESS of all TV staff members and all journalists, that means good profit for TV channel. And good profit is provided by high-quality goal setting of foreign owners that for obvious reasons is not publicized directly, but that, what is called, is in the air. Aleksei Volin, deputy RF Minister of Telecom and Mass Communications, speaking to students of journalism faculty of Moscow State University stated: “Your task is not to make the world a better place but to earn money for that people who hired you”. Find this video in the Internet in order to feel cynicism of the situation.

In order to work qualitatively and effectively TV channel journalists must spare no effort in reeling in local people and conducting anti-Russian rhetoric (of course, not directly but disguised) in pursuit of ratings and money. That it is why people can endlessly be surprised reading news that Channel One invited Ksenia Sobchak to host a new TV show. She just meets the requirements of foreign regulators better than anyone. Who could offer Russian people life lessons on the main TV channel better than her?

Of course, on television there are a lot of “patriots” who loudly defend the honor of the country and scold Europe and the States and so on. But all their pseudo-patriotism is clearly revealed by a popular demotivator dedicated to the main host of political talk shows Vladimir Solovyov. 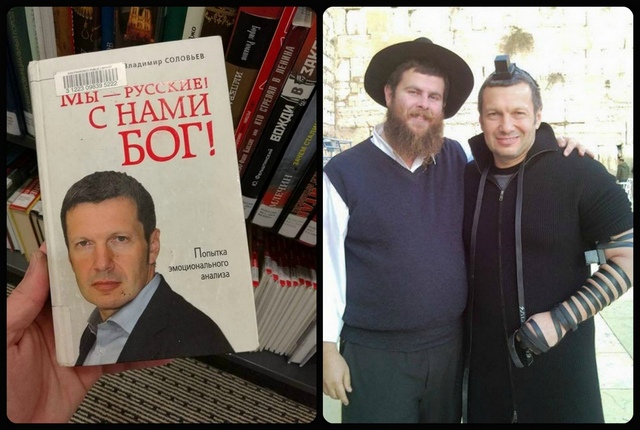 In general, all Russian TV shows are organized on the principle of Trojan horse when they announce to pursue good goals but achieve destructive ones. On YouTube there is a video about this technology called “What do Russian TV shows and Western NPOs have in common?” Watch it to understand how it works using concrete examples. The TV shows themselves are mostly purchased abroad because the “correct formats” are developed in the metropole and then are exported to the natives. But if local employees are particularly diligent and knock off something suitable for customers, then, of course, it is sin to refuse, and this also goes into the business. And a zealous and creative employee gets a promotion and can be sent abroad for additional training.

Actually, for the same reasons the main characters of all TV serials are mostly on the booze, do not communicate much, lead a free sex life and no one even tries to create a strong family. And if somebody tries to do this, they fail. The image of a strong happy family or person of labor has been completely removed from TV screens. As well as the concepts of “conscience”, “chastity”, “honor”, “modesty” and its derivatives. Because no one has yet come up with a better means of genocide than debauchery, vulgarity, alcohol, tobacco and other drugs. And why, if the society is ready to walk twice into the same water for the tenth time.

Humor and horror of Russian television

Of course, all this is mostly given under the mask of entertainment and humor. There are so many professional clowns on television that you could call it “a circus”. Although actually they are evil clowns and all that broadcast on TV is more like an endless horror movie.

But a lot of people do not see the horror and prefer to entertain or say a learnt phrase “if you don’t like it, change the channel”. As if there is any difference between channels. They’d better reread Dunno on the Moon, there is a good image of Fool’s Island. Or brush up on Buratino. Then they would understand why Yakubovich has been a host of Pole Chudes (Russian TV show; lit. The Field of Wonders) and what symbolism is in it. 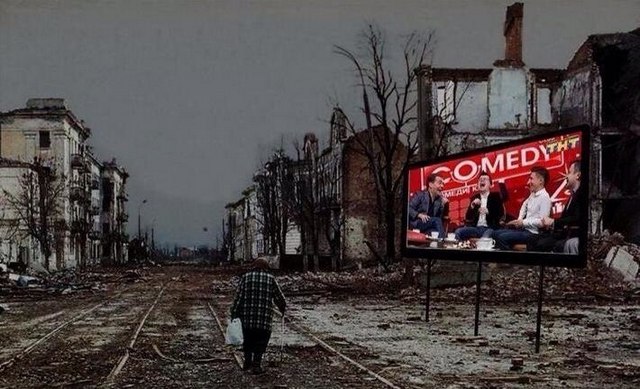 By the way, do you know that the state represented by Cinema Foundation regularly funds horror movies shooting? There are just also effective managers who have a task to earn. Now the well-known phrase “pay taxes and sleep calmly” acquires new meanings. Because the state will spend your taxes on another two billions subsidy for Chanel One or give Cinema Foundation money for the promotion of national cinematography. And Cinema Foundation will use and spend funds by shooting talentless rubbish and bawdiness under cover of the society’s request. It is all about ratings – look, Dom 2 is so popular!

There are no good nights at all…

But everything is not so bad. After all, if you know the arrangement of a enemy’s forces, then it becomes much easier to fight with them. The most effective way to do this is through personal communication and the Internet, spreading the truth about the real goals of TV channels, programs, well-known journalists and mechanisms for manipulating the masses. As more and more people start to wake up and see the deception technologies, the system is starting to stall more and more. As a result, the achievement of certain tasks meets strong public resistance, and sometimes becomes impossible, or requires excessive resources.

One of the projects systematically working in this direction is What is Good project. Read the already written materials and participate in work on the revival of morality in mass media: http://what-is-good.com/

Go ahead, publicity is our strength!

1+
Share:
Participation in the project
Tags:
Also read:
Goals and Objectives of society infantilization
Alcohol in cinematograph, not because it is presented in life
Cinema: entertainment or control?
Implicit methods of promoting sexual disorientation