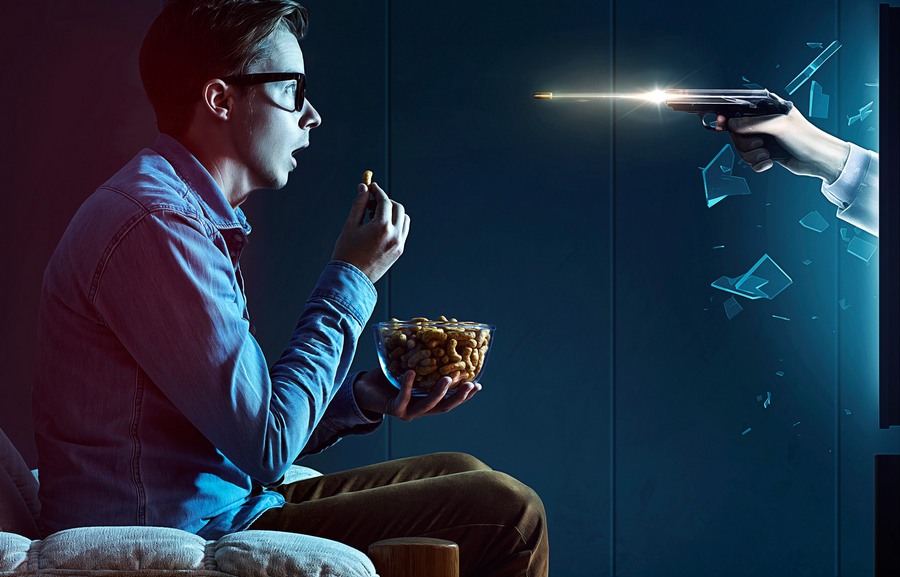 Our decisions and actions during life are determined by our needs and desires. Our needs and desires are being formed and they are our reaction to the influence of environment, which is expressed in the information flows around us. Thus, by managing these information flows, it is possible to cause a quite predictable response or to control a person, both an individual and society in general, without reaching the level of awareness of such control. The possible way of this is showed in The Game, 1997, by David Fincher. The main character, a businessman Nicholas Van Orton, is “lead: his social circle is formed, the necessary information is given, thus, his actions are corrected and he is purposefully driven to suicide.

Entertainment factory or tool of control?

Nowadays the movie industry is presented as an entertainment factory so this  masks the possibility of manipulating our mind through movies. Therefore, the prevailing opinion in society is that movies, like any other art, are intended only to entertain. As a result, it cannot be a control tool. But is it so? A vivid example of thinking on this topic is Alla Surikova’s movie Man from Capuchin Boulevard, 1987, where the dependence of the human behavior model on the prevailing information in the form of cinematography is perfectly shown. As well as individual methods of protection from such an informational impact.

A person gets information from environment using the five senses. We get up to 80% of all information through sight, up to 10% through hearing, the rest is smell, touch and taste. The data received through all these organs is processed by our mind and requires certain concentration of our attention. There is also intuition, the comparison of events that occur around us with images and sensations that arise in the human mind. And it happens both in the waking state and in sleep. However, materialistic science does not place it in a general range of human feelings.

Cinema is an information flow. As any other information it is also processed by our mind that filters information garbage and unacceptable (disapproved) images. The information that corresponds to our values goes to our knowledge base and forms an algorithm for human behavior. If the “filter” that is a certain mechanism for analyzing information in mind does not work, an entire information flow is freely uploaded to the brain and bypasses mind to correct a human value system, as well as the”filter” itself. And if the received information was malicious, then it, like a virus, can distort a person’s entire system of values and introduce a new model of behavior into his or her mind. In the light of informational wars, this phenomenon is called brainwashing. The illustration of this can be Revenge of the Sith, Episode III of George Lucas’s fantastic saga Star Wars, 2005. However, a tool of influence on Eniken Skywalker (Hayden Christensen) was not television, but the suggestion of Senator Palpatine (Ian McDiarmid), who is also the Sith Lord. But this is still the same information intervention in the mind of future Darth Vader. And its heightened emotionality did not allow young Skywalker to recognize the threat and build the necessary protection.

Why can the security mechanism for sorting information be disabled?

Firstly, mind may simply not be used to analyze incoming information. Having accepted that movies as entertainment cannot be harmful, a person watches movies without subjecting them to critical analysis. Secondly, the “sorting mechanism” can be overloaded with informational garbage, for example:

In addition to this, American and European culture imposes the use of popcorn and other food products, as well as alcohol, while watching the film. Thus other sense organs are used, and this causes further distraction of human mind from processing information. 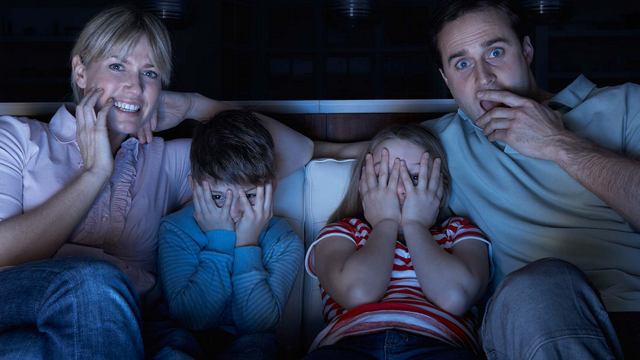 Levels of receiving information while watching a movie

While watching a movie we use only two sense organs of five. But the information gets to our mind on several channels in parallel. According to the depth of perception and impact they can be divided into nine levels:

4. Level of emotions and reflexes – mood, feelings, reflexes. All advertising works on this level including hidden advertising in movies. There is a lot of information about the mechanisms of short-time control of our mind in the Internet.

5. Semantic level – meaning, moral, movie idea. Nowadays there are few people who watch a movie recognizing its idea. Nevertheless, most of authors send a concrete social message through their movies.

6. Cultural (egregorial) level – an information flow that is formed under the influence of purposely imposed culture or that is prevailed in a director’s mind. On this level there is a long-time correction of a person’s value system and behavior algorithms. For example, a feeling of mutual assistance, mutual respect or healthy lifestyle can be cultivated. And on the contrary, ideas of “cultural drinking” of alcohol, consumption, egocentric behavior, rejection of family values can be put in the mind. Unfortunately, nowadays the positive programming is condemned by film critics. In contrast to this, ideas of hedonism, parasitic needs and asocial behavior are positioned as the manifestation of freedom and choice. The most vivid example of such cinema is the series Sherlock, 2010-2017.

7. Civilized level – it shows historical value system that an author has inherited during the process of personality formation. The information on this level often transfers in bypass of a director’s mind. Being a representative of a concrete cultural cluster of the humanity an author of a movie puts the value assessment system that reflects his or her civilized affiliation in a creation. Also on this level it is possible to identify the information about modern peculiarities of everyday life and the social structure of the society that an author belongs to. Perceiving the information precisely from this level, a Russian viewer always smiles indulgently watching how Russian reality is showed in Hollywood cinema. We always notice incongruities of their ideas of life in Russia. It is possible that Americans also smile watching Russian “westerns”.

8. Conspiratorial level – transfer of significant information to “dedicated’ people, viewers of a certain circle who possess some key to understand. Nowadays the attitude to the conspirology is ambiguous, from manic and paranoid to disdainful and mocking. The truth is, as always, somewhere in the middle. I think it is better to highlight this level than not to mention it at all and thus to leave a gap for access of malevolent images in our minds.

Creating a movie any author wants to achieve quite concrete aims. They can be divided into two groups:

Paradoxically, but watching movies solely as entertaining content a person deprives himself of two thirds of pleasure. Since the information is recognized only from the first three levels. Secondly, two thirds of above mentioned information are not perceived by mind, but in bypass of it they get into the brain forming new and possibly malevolent values, needs and person’s behavior algorithms. As a result, a person can change the attitude to life, starts achieving other people’s goals, copies imposed behavior models. Because of distorted value system events that happen around are assessed differently, and developed decisions are taken not in own interests. In fact, a person becomes a biorobot and, what is the most interesting thing, welcomes it.

However a reverse process is possible. It depends on what kind information we consume, what movies we watch, if we subject the seen on TV or in cinema to critical analysis. 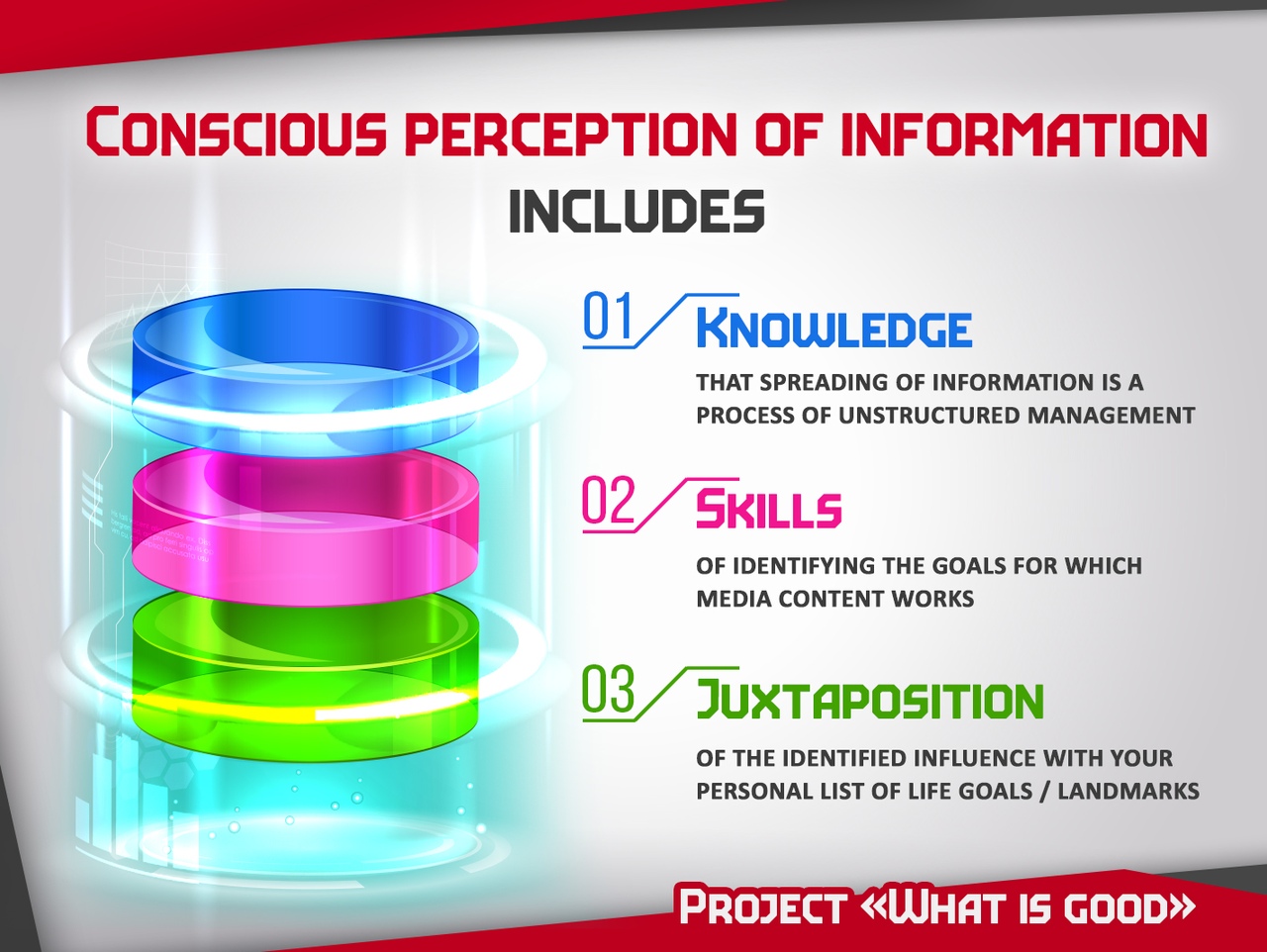 Consciously perceiving information on all levels we get not just full pleasure but a possibility to analyze the seen and the heard. In other words we enter into a dialogue with a director, oppose him or her, and it means that we find a possibility to minimize the probability of zombifying our own minds. In turn it allows to increase our life experience and luggage of knowledge if a movie is really serious, not just a set of colorful pictures, special effects and unusual sounds created solely within a commercial project. Thus a person gets an effective protective tool and can successfully resist the outside informational aggression.

In 1930s Hollywood shares were bought by several large American corporations and the creation of entertaining cinema industry was announced. It still helps to form needs and value systems not only in America but in the world. In 1916 Khvostov A.N., Minister of Internal Affairs of Imperial Russia, advocated state  monopoly of cinema considering that cinema should be a means of educating the population. It shows that managerial elite of all countries considers the significance and the potential of this kind of art as a very powerful tool of mind control. But the epoch of leaders has gone and every person should realize it and, thus, get a possibility to protect against any malevolent informational interventions into the mind, in particular through cinema.