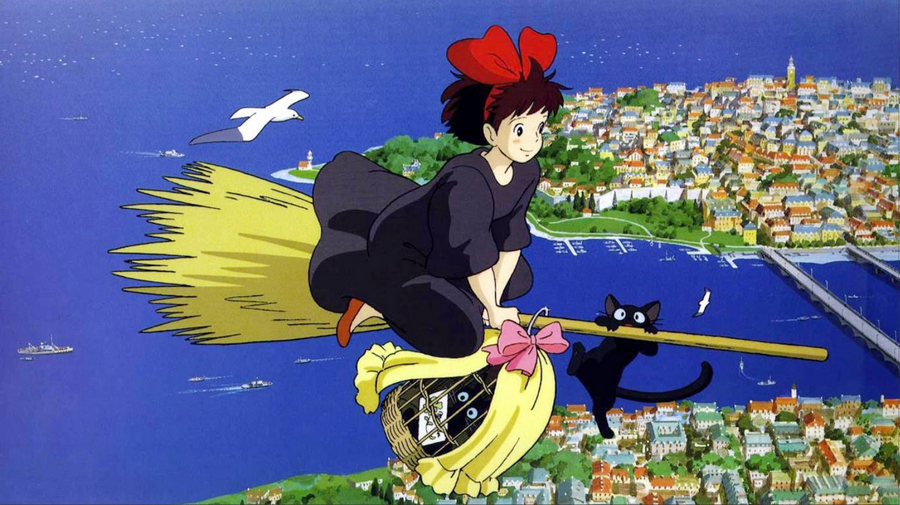 *Note: the Cartoon “Kiki’s delivery service” (“Witch’s delivery service”) was made as anime. Unfortunately, today’s anime content impregnated mostly with the destructive senses, radically different from the content by Director Hayao Miyazaki. Therefore to introduce anime genre for children more, even on the example of a good cartoon, should be informed decision of their parents.

Cartoon is a story about young girl Kiki. At the age of thirteen witch becomes an adult and can leave his home for one year to try to live an independent life. So she did. She went to another city taking with her mother’s broom, father’s radio receiver and black cat Jiji, with whom Kiki can naturally speak.

She settled down in an aunt’s house.Her aunt was a baker and sold bread. Kiki believed her best skill was to fly on a broomstick. That’s why she decided to organize delivery service.

We have to pay attention to Kiki’s family image. Her family was complete. Father and mother loved their daughter, and of course and they didn’t really want to let her go. You can notice Kiki has a good relationship with both dad and mom: dad liked to spin around his daughter in his arms, mom gave Kiki to fly on her broom. This image forms the right ideas about how normal family should look like, what are standards to be healthy and happy. It is very important for children and adolescents to have correct image of the family, to have ideal to follow up in the future.

Though Kiki was a thirteen years old, but she was still a little girl. Her desire was to be an adult and independent – this deserves a special praise. The first question Kiki faced was “what can I do?” The chance gave her the answer. The broom could be her main tool to be independent.

Kiki settled down in vacancy room of her aunt’s house which was a bakery in one. During preparation of the delivery service she didn’t procrastinated any time always helping her aunt on her business, she washed floors, she helped to set and unload bread from the oven, she worked as seller. From the first days of independence life you see diligence and patient girl. 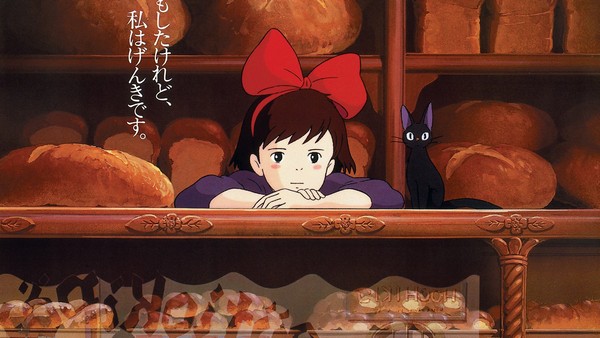 She received her first order to deliver plush cat toy as a gift for a boy for his birthday. Kiki started her trip with a bird cage with a toy inside and a map showing the end point of her route. During delivery she faced her first challenge. The storm wind begun. Kiki fell down into the woods near the magpie’s nest. Magpie attacked the young witch due she thought Kiki wanted to ruin the nest. The girl quickly flew away from the forest but on the way found she lost a toy. Attempt to go back and find plush kitten was not successful as the magpies decided she wanted to ravage nests again and began attacking her.

In such a difficult situation Kiki showed one of the important features of her character is responsibility. She couldn’t fail her mission, she had to complete it. She suggested her own live cat Jiji temporary to replace a plush toy gift. She gave her lovely kitten into the hands of a little boy until she finds a plush toy.

She went again to the woods walking to avoid magpies attack. There she found a hut, the property of the young artist girl. In hut Kiki found a plush toy. It is important to note Kiki went not just to pick up a toy without asking and runned away. Visiting a hut she certainly decided to find the owner of the home to have her permission to pick up the cat toy. And it shows the honesty of this young girl. However the toy was damaged. Girl artist sewed it and Kiki to appreciate for repair had cleaned in the hut.

With the next order Kiki faced a situation of choice, where on one scale easy money and time for entertainment and on the other – the right deed. And again the young witch showed her best following the advice of her mother that underneath the black dress should be a good heart. 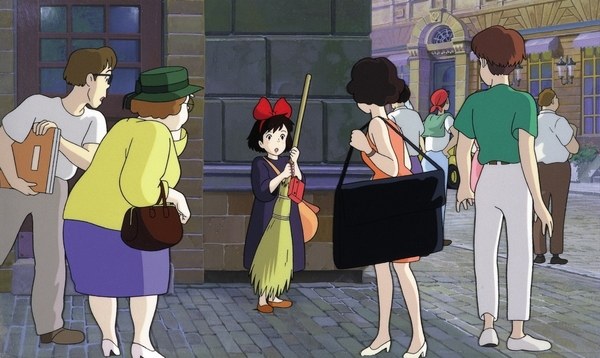 Old lady decided to use the services of “witch delivery service” had broken the oven. She did not have enough time to cook a cake for her granddaughter’s birthday. She apologized to Kiki and offered girl to take the money. At the same time Kiki was invited to a party at the club and she’s in a hurry, but she couldn’t leave old lady helpless. Kiki offered to bake a cake in an old stove heated with wood. She brought wood, made a fire and loaded the cake into the oven. Despite the fact her plans for night were destroyed she felt free to reply with kindness to old lady.

Kiki got into heavy rain delivering pie but nothing can stop her, and again she showed her responsible attitude to the work and to her duties. She delivered the cake to its destination.

Next scene showed huge difference between Kiki and granddaughter of the old lady. When Kiki delivered the cake girl replied she hates her grandma’s pies. And here is the difference. Kiki felt kindness of others and was ready to reply the same. The girl was a spoiled selfish. She couldn’t take care and didn’t love her grandmother and disrespect her work.

For some unknown reasons Kiki suddenly started to lose her magic abilities: she didn’t understand the language of her cat, she couldn’t ride to fly her broomstick. The started business was in danger, Kiki could not fly and would not be able to deliver parcels.

For the Kiki’s fortune the artist girl from hut in the woods came to visit her and suggested to live few days in the woods to escape from problems and to relax. They communicated, made shopping together and afterwards got the destination in the woods using hitchhiking.

In the ambient of the wilderness amazing things happened. Girls were talking about the purpose of the human life. The one of the most important question which Human must to ask yourself. The girlfriend told the story of her life, how she decided to devote herself to the fine arts, how she also faced difficulties, how she overcame them and that she was not always able to draw well.

“The soul of a witch, of an artist or of a baker are God’s gift for us. And we suffer for it” – said the artist girl.

Previously Kiki has just used her abilities without realizing what it was like to be a witch. All her gifts existed on intuitions level: she simply was flying on a broomstick, was in contact with the cat, that’s all. Now the next stage – to understand her gift and to find a worthy purpose for it in her life. How to find the answer? How to understand what to do next? Would she decide again to use her broom? And fate gave her a chance to get answers… 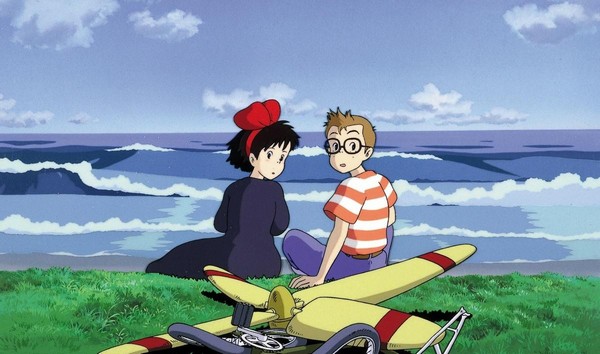 During independent life Kiki made friends with one boy. He dreamed of flying. He was designing a bicycle aircraft with a propeller in his workshop. And what was happened, naughty boy was hanging on the rope of the zeppelin broken by strong winds, completely out of control. Who can save the young dreamer? Kiki again had to take up the broom and went to rescue her friend. Would she be able to save the life of her mate controlling fully her talent to prove herself that being a witch is her destiny?

When Kiki returned from the artist friend she was invited to visit old lady which Kiki helped bake a cake. She gave the girl a cake to thank her for her kindness. And this point also was very important because Kiki not just took the cake, she asked permission to know old lady’s birthday to reply her later with a gift. Even in such trifles the spirit of this young girl was shown, not just to receive, always reply with kindness to people. The moment clearly demonstrates good always returns back.

About choice a witch as the main character

The only thing was ambiguous in this cartoon is the main character a witch. The modern concept says witch is a negative character which is rather dirty and does different nasty things than do something good.

However we see a completely different image of a witch. Kiki’s mother who was also a witch helped people. At the beginning of the cartoon she made a medicine against rheumatism for one old lady.

Perhaps Miyazaki in his vision of the character of the fairy tales made reference with more ancient beliefs about witches who were not always considered as enemy of the people. Bad stereotype came from the medieval “witch hunt”, when suspicion of such could be burned at the stake..

The cartoon “Kiki’s delivery service” is very good like all cartoon created by Hayao Miyazaki. There were no any bad heroes and characters. Children were shown not like loafers spending time in entertainment. They were shown as little “human” in which the voice of a dream only awakening, and the world was ready to open them its secrets and ways. In cartoon’s world people communicated freely and friendly always trying to help each other, adults easily found a common language with kids, and kids – with adults. This whole a fairy tale world looks like a real dream. But this is the really good example for Humanity.

The story in a cartoon is about friendship and mutual understanding, a kindness is a force helps to overcome any adversity and challenges, helps us to become better. It is difficult to imagine what little girl would expect in our world, where people try to isolate themselves from each other and are afraid to meet once again, especially if it does not bring them a profit. What would have happened if Kiki’s aunt Sona hadn’t come into her life with a bakery and didn’t offer the young witch a place to stay? Might be Kiki would not get the chance to perform herself from good side.

What does this cartoon teach? First of all, to be an adult is not only a privilege and freedom, to be an adult is the readiness to take a responsibility for all actions and mistakes. Second, the cartoon is about the role of human, about finding place in this world. Very important question for teenagers whose life is just at the beginning.

The main character Kiki is certainly good example to follow up in all senses. She demonstrated a whole bunch of good human features: kindness, honesty, responsibility, diligence. She had no greed, no envy and no cunning. Kiki’s behavior in different life situations is very instructive, and is a good example to show What is good.

Export of the assessment
<a href="https://what-is-good.com/tv/cartoons/kiki-s-delivery-service-1989-human-kindness-in-the-fantasy-world/"><img src="https://what-is-good.com/wp-content/uploads/2014/0/oc_g.png"/></a>
7+
Share:
Participation in the project
Tags:
Good cartoons
Also read:
Adverse cartoon indicators
Features of the English version of the animated film "The Angry Birds movie"
Cartoon "Inside out": violent anti-intellectualism
Hollywood is preparing a massive attack on children