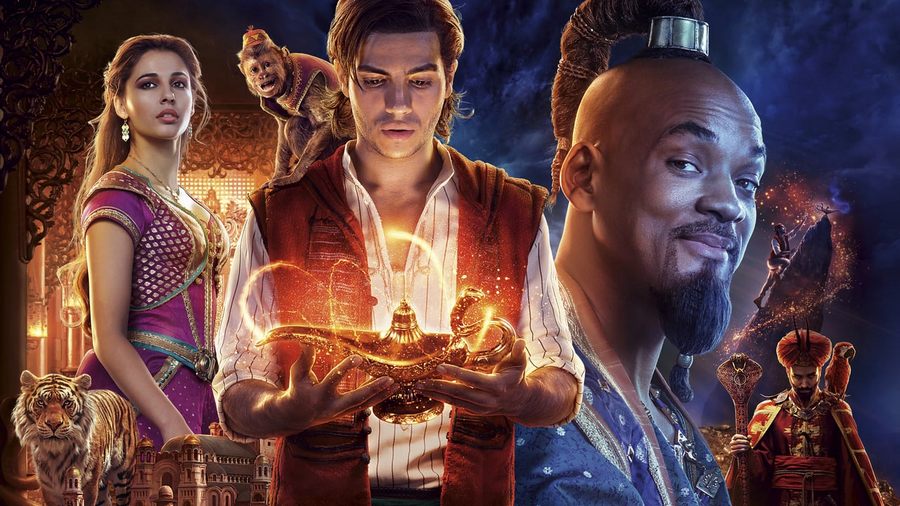 The film “Aladdin” is one of those premieres that you are initially skeptical before watching it. There are several reasons for this. First, the Disney studio is famous not only for its very bright scenery and fascinating scenarios, but also for its ability to wrap the poisoned apple in an incredibly beautiful wrapper. All that glitters is not gold. And not every fairy tale filmed by Disney is useful for children from the point of view of its educational effect, which we have learned well from the example of the “Maleficent”.

Secondly, the plot of the animated series “Aladdin” is built around the image of a clever and successful thief hero, and Guy Ritchie, who has quite a “criminal” reputation, was invited to shoot the film. Because of that, there was a high risk that from the ethic-moral point of view the audience would receive not a story about the eastern Robin Hood, but a children’s version of “the Brigade”, that idealizes the images of criminal life and easy money.

Nevertheless, it is necessary to admit that the filmmakers managed to pass along this fine line, showing that not every breach of the law is immoral, just as not all respect for the law is righteous. It is worth to refer to this topic in more detail, since it resonates through the plot of Aladdin.

At the very beginning of the film, the viewer is introduced to a young guy who is not averse to get food by showing sleight of hand and stealing something “he can get his hands on.” In the plot, he deceives only bad people and shares happily the proceeds with the poor people he meets. Actually, there is no greed in his behavior, and he doesn’t need to earn for his living more. About this Aladdin sings in his song, where, in particular, these words sound:

“One jump ahead of the lawmen. That’s all, and that’s no joke.

Aladdin lives in a society that is totally stratificated into enormously rich and absolutely poor. Someone cannot buy bread for himself – and someone walks in golden slippers. Is a breach of the laws in this unjust society an immoral act in order just to survive? Everyone may agree that in this situation the truth is on the side of the street boy.

But then this topic gets a very interesting development. Having found a magic lamp, this very street boy turns into a rich prince. Now he has to prove in practice that his theft has never been a means of enrichment, and he will be able to resist the temptation to become a “lord” in this slave-owning society. But he really feels like climbing the social hierarchy. After all, it’s not just wealth (this young talent is just hard to be bribed with it): it’s the princess’s love who cannot marry a beggar. “Wealth brings love” – a difficult dilemma, isn’t it? 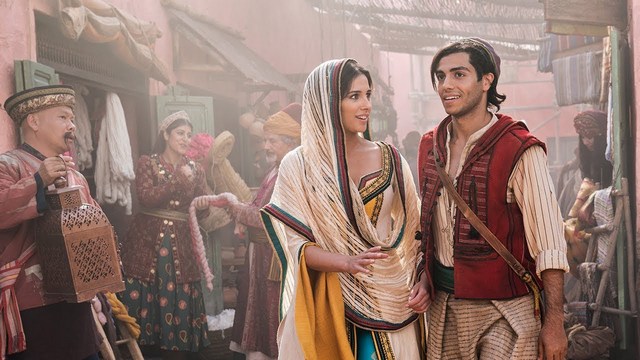 Fortunately, Aladdin has met a good friend, who has spent several thousand years in a cramped lamp and has   managed to learn one truth very well: everyone who considers himself to be the lord is at the same time a slave. Only that Man is truly free, who is not served and who himself should not say to anyone “what are you willing.” Jinn dreams of becoming free again, but only that person who spends one of his desires for his release can fulfill it. And wishes are very necessary – after all, the city of Agraba, its Sultan and the beautiful princess Jasmine should be rescued, and he would like to get on in life, because he cannot be a poor thief forever. And Jinn’s words: “the more you have, the more you want” aren’t surely pronounced out of thin air.

Aladdin himself does not have many centuries to deal with all this complicated philosophy of life, which his magic friend from the lamp shares with him through songs. He needs to act, making constantly his moral choice – in one direction or another. And this should be the main achievement of the filmmakers. They have demonstrated very clearly that further course of events depends on the choice (or rather on the root motives of this choice).

No matter how hopeless the situation and no matter how great the temptations are, if you act according to your conscience, then everything will definitely work out. But if you relax a little, let yourself live like a lord, spin out a forced lie a little or try to be happy based on a lie, then everything will change very quickly, and you will end up at the very bottom of the world. But if you find power to stand up, then the fate will surely give you another chance to find yourself in a similar situation again and make the right choice. This is very often the case in our life, but very rarely such a logic of the plot development can be watched in a film. Fortunately, in the case of the film “Aladdin”, the creators of the picture have tried not only to observe this law of the universe, but also to add cautionary tales to it and hints from various heroes. 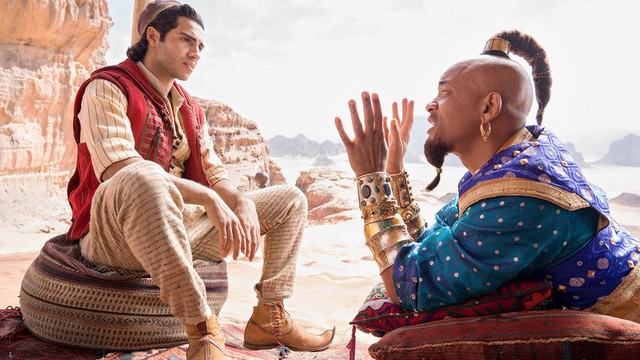 In the film Aladdin is not the character who makes no mistakes, but despite of his failures, he is that, who always chins up and is ready to make it right: to listen to his heart and act from his soul. Even if for the sake of this you have to abandon the very “love”, in the pursuit of which many lose themselves.

At the same time, the plot of the film is not consumed in Aladdin alone. In the course of events all the main characters will have to learn their life lesson. Villain Jafar dreams of becoming the most powerful in the world. Unfortunately, his dream is destined to come true. The head of the royal guard has served devotedly the Sultan all his life and honored the Law above all. But what if honor and law are on opposite sides of the barricades? Could he break this law and become a criminal if circumstances so require? Sultan himself is confident that only a strong warrior can rule the country, and he is looking for exactly such a person as his daughter Jasmine’s husband, searching among foreign princes. However, what is more important for the leader: nobility, wealth and refined manners, or the knowledge of his people and the desire to serve them?
The main female character – princess Jasmine herself is also depicted perfectly in the film. There is no doubt that she worries about choosing her life partner: as she herself says, “I am not against marriage.” But the issue of the injustice in social order and the fact that the people are poor is paramount with her. “The measure of happiness for me is the happiness of my subjects,” the Princess recalls her mother’s words when talking to with her friend. And this is not hollow words, the filmmakers really show the heroine that lives with lofty ideals and puts the interests of society above their own. The lyrics of the song that Jasmine sings are indicative:

Whenever they try to shut me or cut me down.

I won’t be silenced you can’t keep me quiet

Won’t tremble when you try it

All I know is I won’t go speechless »

The princess behaves rebelliously, boldly and even risky sometimes, but her persistence and will are based not on personal, but public interests, therefore, what you call, it’s a risk worth taking. In the meantime, in this character the will is combined with femininity and attractiveness; besides, Jasmine is also witty and likes reading books. 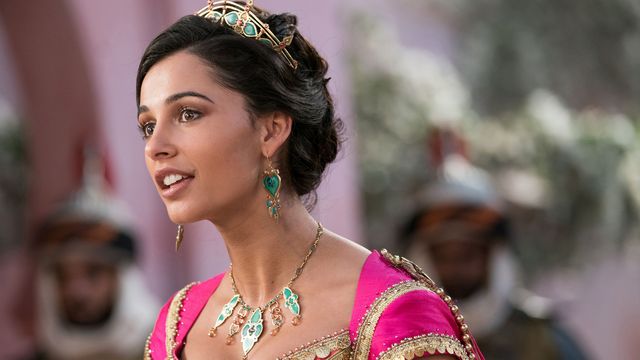 Meanwhile, Jafar is already scheming and exhorts Jasmine “to observe traditions and to control her tongue.” According to him, only a successful marriage will provide peace with neighbors and will allow the state to be saved. And he seems to be right. But the film clearly shows that there are situations when the old traditions don’t work anymore and new decisive action is needed.

All this action is accompanied not just by one, but two romantic stories at once, that are shown with humor, kindly and without vulgarity. Therefore, the film may be watched both with children and with your other half, to immerse in an instructive, fabulous and very touching atmosphere.

The drawbacks of the picture include the excessive clip quality of the content, due to that small children (the claimed age category is “6+”) may not have time to understand the plot and everything that happens on the screen. But with 9-10 years such a movie will be perceived completely, and will make a good impression. Do not forget to discuss philosophical questions after watching, which are abundant in this picture.

There is a kissing scene at the end of the film. Also in one of the episodes, Jinn tries on the image of a dance-girl for a couple of seconds. Given that he is depicted with the beard - it looks really ambiguously.
Also, someone may be confused that in the realities of the new film Jasmine is more prepared to lead the state than Aladdin. Probably this substitution of social roles is ideologically oriented and corresponds to the trend towards the feminization of the society. However, it should be accepted that this logic of events looks more plausible, because one pure heart may be not enough to lead the country (this is true for both heroes in the pair Jasmine-Aladdin), but in the story the princess has more necessary knowledge and skills.

In the film there are few scenes of punch-up, - mostly fascinating chases, bright dances and meaningful songs.

Very beautiful film with a fabulous oriental surroundings and soulful songs. The general educational message is clearly constructive (theft is not encouraged, the main character is mistaken, but he gets an opportunity to correct his mistakes and establish himself in his pure intentions). The storyline of each character carries its important moral lesson, including:
• Only is the person free when he does not want to be a slave or lord
• The more you have – the more you want
• Traditions must be treated with respect, but thoughtfully. Sometimes they can be changed.
• There may be situations in life when it is necessary to break the law and act according to your conscience
• Pursuit of fame and power leads to slavery of the soul
• Life helps those that are brave and who have pure thoughts
• Lie is a bad foundation, happiness cannot be based on it.
• If you want to rule the kingdom – read books

Film Classification: PG
Export of the assessment
<a href="https://what-is-good.com/tv/films/aladdin-2019-can-a-thief-be-a-positive-hero/"><img src="https://what-is-good.com/wp-content/uploads/2014/0/oc_g.png"/></a>
3+
Share:
Participation in the project
Tags:
Good films
Also read:
«Deadpool»: Is Killing Funny?
«Pirates of the Caribbean» media franchise (2003-2017): Can a bandit and a scoundrel be a nice ...
Film The Family Man (2000): It’s never too late to do it right
"Before I Fall": How a spoonful of poison was dropped into a barrel of honey