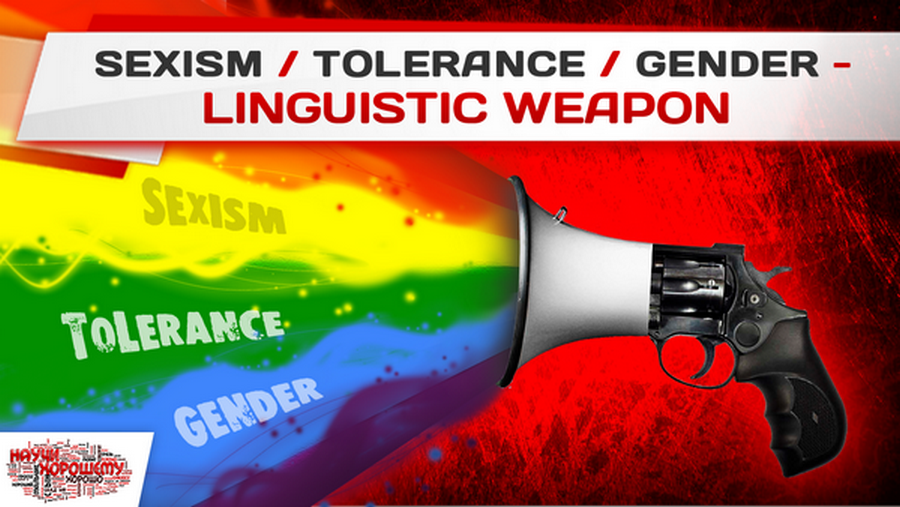 “A weapon kills once. A word can kill again and again…” (c) Charles J. Chaput

Today, the majority part of society is beginning to realize that the mass media are not just providing news about current events, as managing social processes. And, as in any fields, there are constructive and destructive methods. Some mass media tries to give people such information that will contribute to their morality and intellectual growth, help to form a global view of the world. Others constantly engage in the confusion of the facts and manipulation and turn the truth into falsehood.

There are countless ways to mislead, but today we will cover, one of the subtle and important aspects in this area, which can be called “linguistic weapon”. We will analyze the three most relevant terms, the use of which will automatically lead to far-reaching devastating consequences. Here they are: “sexism”, “tolerance” and “gender”. Exactly these deceptive words are currently representing the greatest threat to our society.

Let’s analyze the term “gender” first. Today it actively uses not only by the liberal press in Russia, but also in scientific works and publications on psychology and even presents in certain legislative acts. The word “gender” is foreign and came to us from the West. There, it was popularized by the feminist movement, as well as in the concept of protecting LGBT rights.

There is no single clear definition of this term. Wikipedia provides a very vague wording about what “gender” means. The lack of exact wording explaining the definition of the term is a key feature of linguistic weapon and this is a reason for constant manipulations.

Linguistic weapon is based on the introduction to society of new, confusing “terms” with blurred definition.

In the meantime, the term gender is most commonly used in the expression “gender self-identification”. This phrase implies that a person is not born as a man or a woman but can select a preferred gender by thoughts and feeling rather than obvious evidence, and this supposedly is normal. This is not true. The biological sex is an objective fact, and it is binary: “male” or “female.” Any alterations in a biological sex is a pathology, a disease or an abnormality. The term “gender” equates pathology to norm and has a devastating effect on society, and therefore it is unacceptable to use.

Any media person or even a scientist who uses the term “gender” in his speech without explaining its deceptive definition — either a professional manipulator or a man who was misled and has no knowledge about the subject.

The term “gender” equates pathology (gender dysphoria) to the norm and thus is an example of “linguistic weapon”.

Now let’s analyze the second term that is being actively propagated in Russia – “tolerance”. Same as with the term “gender”, it is impossible to find clear definition for it. Wikipedia provides a variety of explanations which can have hidden meaning, while some of them have contradictory sense. For example, in the medicine dictionary, it means the inability of the body to distinguish foreign organs or to resist infection. And in sociology, tolerance implies patience with a different ideology, lifestyle, moral behavior and customs.

So why do the mass media actively impose precisely “tolerance” rather than “patience” if the meaning of these words is common? The reason is that the term “patience” has the opposite meaning – “impatience”. You can be patience with another opinion, lifestyle or behavior as long as it does not threaten you, your family, and your country. If a social phenomenon, such as the imposition of a gender ideology, cause a danger to society, you must to be impatient regarding this situation and prevent its spread.

Meanwhile, tolerance propagandists urge us to live according to the principle “live your life whatever way you want,” that means, to stop using critical thinking, to ignore destructive processes, and generally only think about yourself and forget about civil duties. Thus, in the social aspect, “tolerance” is a lack of conscience and complete lack of awareness between what is right and what is wrong. 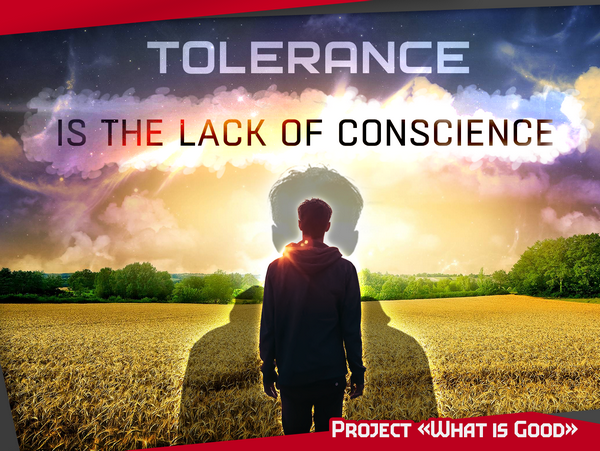 Now let’s analyze the third term, the main goal of which is to engage men and women in conflict. We are talking about the meaning of word “sexism“. Wikipedia gives us a quite concise explanation in this case. So, sexism is the discrimination against an individual, based on sex or gender. From this assertion, “sexism” is derived from the term “gender”, we have previously analyzed, and based on history, it also emerged from feminist movement in the United States.

“So, what? – you say, – in any case, fight against discrimination is a good thing. Who cares who invented the word?” But whoever came up with the word put a certain meaning into it. And since the term “gender” denies the biological differences between men and women, then “sexism” proposes to fight with gender discrimination on the pretext that there are no biological differences between men and women. In fact, this means: advocate for women to serve in the army on an equal basis with men, for gradual increase the number of women in politics to the number of men, for shared public toilets, and so on.

Feminists: “He insulted a woman and did not give mother and child a seat on the bus. This man is a sexist. We must fight sexism!”

Result: Women and men are turn against each other.

Normal people: “He insulted a woman and did not give mother and child a seat on the bus. This man is impolite and has no manners. We need to be engaged in education process and improve the level of morality in society”!

Result: Women and men unite together to solve common problems.

Mass media regularly make various absurd accusations of discrimination against men or women, which puts the public debate on the wrong track. The foundation from which society grows is not an individual aspect, but the family. The family as the basic unit of society and exactly this category as “family rights” should be introduced into the legal framework and promoted at the federal level. Otherwise, by defending men, women and children rights separately, we will end up in fighting against each other. This is exactly what our detractors want.

Women and men should not fight each other for “their rights”, but unite and jointly promote the category of “family rights” at the federal level.

4+
Share:
Participation in the project
Tags:
LGBT promotion Technologies
Also read:
Discreditation and devaluation of parenthood in "Disney" production
How we get rid of children
The creation of the group Rammsstein: a mixture of faсsism and pederasty
Cartoon sample #1: "Tom and Jerry", "Miraculous: Tales of Ladybug & Cat Noir...