Approximate reading time: 12 min.
A link to the article will be sent to you on e-mail:
Review of the film Black Panther (2018) of the project What is good.

I’m getting more and more convinced that a superhero myth – both in comics and movies, based on them – is a lengthy, colourful and solemn hymn to Blind Luck. You’d been disabled since childhood, but they chose you for a secret military experiment. You’d been a regular nerd, but an exotic spider bit you. Maybe, incidentally, lightning struck you during someone else’s scientific experiment. No, no one bit, injected you, gave you an electric shock, but everyone is like you on your home planet. You may be a mutant. Your deceased father could be a billionaire. In some cases there is an extraterrestrial meteorite under earth and miraculous flowers grow on the surface above it (I wonder, why those miraculous plants are always supposed to be blue or purple – maybe because somewhere there is such a law with a big seal), so everyone around you starves, thirsts and lives in huts, but you have skyscrapers and superjets. To put it briefly – Lady Blind Luck in action.

Well, of course, they always remind the reader-viewer, that supertalents, got for nothing, imply great responsibility, sometimes even side effects (e. g. you cannot control one’s anger, so you have to change clothes and addresses often or you suffer from a rare allergy or, at least, inveterate depression). In some cases everyone wants to rob or abuse you, so you need to hide from the whole world, and it doesn’t matter that “you” are a country. Nothing can be easier, when you have megatons of a magic mineral

I have never seen such a dull, uncharismatic, ordinary main (even title) hero before. Actually, there are hardly any colourful characters here, and it has nothing to do with the colour of the skin. The antagonist is a mix of a teen rebel and a male stripper (besides, he obviously lacks roughness and inevitable cynicism of an experienced killer, in spite of all his treacheries).The white (for a change) inferior villain is just a “wanted”-type criminal, who can be characterized as a cruel, greedy, slovenly, though some kind of flamboyant guy. Only two characters make this bleak picture more attractive. The first one is lively and gifted princess Shuri, who seems to be a human version of the heroine from the cartoon about rodent rescue rangers. Another one is a white “good guy” – agent Ross – who looks sweet and nice as usual, but a bit lost among black faces. Apart from that, he definitely misses Cumberbatch as a friend or an enemy.

Actually, the lack of bright individualities among characters has its reason. In spite of the fact that the main hero’s name was borrowed for the title, the movie is not about him – it’s about the African country Wakanda, blessed by Lady Blind Luck. This country is a collective superhero with its own personal psychological problems and internal conflicts. This hero is colourful enough. You may think that Black Panther is about Prince T’Challa’s adventures or black people’s problems and racial pride (as a tolerant viewer could think). No, problems of this (probably) made-up country are the main theme of the movie.

Well, it is typical of a superhero to disguise oneself as someone unremarkable. The weird thing is that eventually most of the secret superheroes start feeling a certain itch, which makes them do their superhero work – inflict good and cause justice. First secretly, then openly, as you cannot hide an eel in a sack. Very few people would use optic energy beams to catch and fry fish by some god-forsaken lake. Only Wolverine springs to mind. Before he met Professor Xavier, Wolverine had been unusually unsociable and difficult to cooperate with.

Wakanda’s choice is to use one’s piece of Blind Luck secretly, hiding under cover. It has no evil plans to conquer the world, makes no attempts to do humanity any favours. Neither fish nor flesh. However, in the movie Wakanda has to face that classical superhero choice and is placed on the horns of a difficult dilemma. It has to decide if it is going to get out of one’s cosy covert or hide better. One part of its split personality wants to get or even pop out and tear everyone and everything to shreds. For the sake of world piece and justice, of course. Another part doesn’t care about cheap toughness and wants to train war rhinos. The third is in deep thought. Luckily, it is able to think and act. As well as it can handle superjets, invent various useful stuff, build skyscrapers – along with spear fighting and talking to ancestors’ spirits. Rhinos do not at all disgust it, either. It’s too predictable that this (actually – the healthiest) fraction of Wakanda’s soul is nominally represented by the main character. Being the voice of reason here, he has all the rights to have a good flower drink, reprimand his own old-fashioned ancestors and change the results of absolutely honest and clean (NB!) “elections”. Collective “superhero” heaves a sigh of relief, throws one’s shoulders back and opens the squeaky door wide to do the whole world good in the therapeutic range (to avoid overdose). It doesn’t use the candle, got for nothing, to set the world on fire. Nevertheless, it takes that candle out of the container for everyone to see. Places it on the top of the hill, so to speak. Let it shine urbi et orbi. The end. 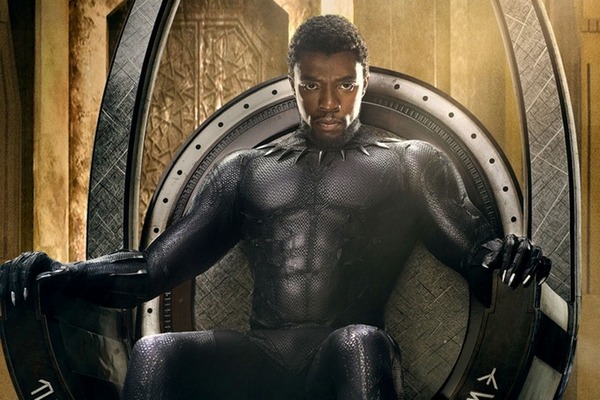 It’s obvious that there is no superpower hidden in Black Africa. As well as there is no miracle vibranium and miracle flowers. However, there is a land that actually faces superhero dilemmas. In this country there is a picturesque place, decorated white letters making a giant word: HOLLYWOOD. It’s easy to guess what country we mean. Of course, this country doesn’t hide from anyone, and it never has. Just the other way round, it’s been long accustomed to making nuisance of one’s shining from the hill and burning the planet here and there (just like Superman with his heat vision), turning peaceful and prosperous countries into trouble spots. Still “Black Panther” is a movie negative – everything is reversed there. At least theoretically, Trump’s presidency (the result of absolutely honest and democratic elections, which is crucial) is going to make the States cease spreading democracy all over the world and they’ll have to deal with their own national interests and problems. It means the country will step into one’s own personal Narnia-behind-the-Wardrobe-door partially if not completely. Someone doesn’t like it at all. The (to a certain extent) reviving racism – white racism, of course – plays its role, too.

Needless to say that there is no point in deciphering comics literally. Still it is a “popcorn” entertainment rather than a tale by uncle Aesop or a piece of anti-Trump propaganda. Nevertheless, it’s obvious that the film is about America’s own painful issue. About “a shining city on a hill”. About its natural pre-eminence. Why natural? Well… because! About a conflict between one’s interests and the itch to solve world problems. About the way they should be solved. Should we throw deadly weapon all around and support “necessary” extremists or should we use “soft power”? At last what should we do when “the wrong guy” became our president absolutely legally? The last issue is an especially burning one. That is why Killmonger wins his victory according to the rules, but for a short time, for nevertheless he gets dethroned and eliminated in the blink of an eye. No Watergates or irresponsible girls were necessary. Quite shocking, isn’t it? At least, used to be until recently.

Now, what about blacks?.. Nothing. African Americans and African Africans have other problems. These problems are touched on in the movie, but superficially and not in a very convincing way. Besides, not only they have problems, but there are also problems connected with them. As well as with hundreds of thousands of refugees from the countries, where the States were going to bring democracy, but dropped it very inaccurately. There are a couple of episodes, concerning refugees, in the movie – it is proposed to open all the doors and have no border walls! Still, it is quite possible that this film gratified many black people both in the “city on a hill” and outside it. Perhaps it even made someone believe that it is possible to step into fantastic prosperity, but keep such traditions as ritual spear fights, tattoos, whole body scarification and shaman rituals (that vaguely remind Masonic initiation ceremonies). For no reason – just thanks to Lady Blind Luck, or by the grace of God, the one we trust in. For, if we dig a little deeper, we will see a spearhead in a “civilized” fight for power. Or a stone ax – of the same original style. And it doesn’t matter if it’s made from Vibranium…

9+
Share:
Participation in the project
Tags:
Bad films New films
Also read:
The film «Brother Bajrangi»: When people unite to do good things, they can overcome anything
The cartoon "The Boss Baby" (2017): Ideology of child free for the littlest
With what has the TV series “Supernatural” ended up?
Background message of the TV series “House MD” on the example of one episode